An iconic film for Icelandic Noir.

Jar City (original title: Myrin) is a movie adaptation of Arnaldur Indridason's third installment in the infamous Inspector Erlendur crime novel series. The book was a huge success, it won the Glass Key award for Best Nordic Crime Novel (2002) and introduced the author in wider audiences around the globe. This was the reason that impelled one of the most prominent Icelandic auteurs, Baltasar Kormakur, to attempt a silver screen adaptation of the novel, one that remains faithful to the mood and the character of Indriason's text.

Ingvar Eggert Sigurðsson (Trapped, Reykjavik-Rotterdam, Cold Light) is a remarkable actor and does a terrific job in portraying one of the most interesting characters in Scandinavian crime fiction, the solemn and reticent Inspector Erlendur. His relationship with his junkie, pregnant daughter, Eva Lind, which is an important theme in all the Indridason's novels, is explored as much as it can be in the confinements of the movie's running time and adds to the impeccable characterization of the protagonist.

The story revolves around the investigation of the Reykjavik homicide unit, consisting of Erlendur, Sigurður Óli (Björn Hlynur Haraldsson) and Elinborg (Ólafía Hrönn Jónsdóttir), into the murder of a middle-aged man, Holberg, who was beaten with an ashtray by an unknown perpetrator. The investigation team scrutinizes the victim's past and soon discovers that Holberg was accused of rape in the past. This is the basic premise of the plot which is tightly-knit and non-superfluous while it unfolds at a measured, steady pace, never becoming tiresome for the viewer. Though it is a rather straightforward story, there are some twists and surprises to keep the spark alive for the audience.

The main advantage of Jar City is its wonderful cinematography. Reykjavik is a character itself and the director offers some great visual impressions of the city through aerial shots and succeeds in aligning the film's mood with that of the grey, almost impersonal town where this classic police procedural is set. Baltasar Kormakur (101 Reykjavik, The Oath, Everest) is a gifted artist and this is one of the first movies that established him as one of the best Continental directors. If you enjoyed the books in the Inspector Erlendur series, you will definitely love this film but even those who are not familiar with Arnaldur Indridason's work will be thoroughly entertained. 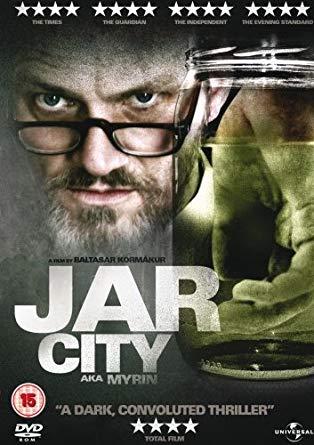