A bizarre Italian thriller with a great cast, but lacking an engaging plot.

Donato Carrisi is one of the most celebrated contemporary Italian crime writers and his novels have won both critical acclaim and commercial success. Carrisi made his directorial debut three years ago in a movie titled The Girl in the Fog, a sublime murder mystery/thriller that stood out due to its great storyline and the remarkable, deft and absorbing plot. When I heard that he was about to shoot his second film, based again on one of his novels, the titular Into the Labyrinth (original title: L'uomo del labirinto), I was very excited and overeager to watch it with the first chance I would get, even though I was not familiar with the book. Unfortunately, this is not a movie equal to the previous Carrisi flick and its main flaw is the jumbled plot, which in parts is also implausible and farfetched, that overshadows the film's -many- merits such as the Lynch-like colorful cinematography and the great cast. Toni Servillo, who was also the protagonist in The Girl in the Fog, holds the primary role of Bruno Genko, a private eye whose main business activities have to do with dept collecting and similar minor stuff. Nevertheless, over fifteen years ago, Genko took over a very important case, that of the abduction of a young girl, Samantha, who has now been found in the woods after a mysterious anonymous call to the authorities. Samantha is kept at the hospital and when she wakes up from her coma, she finds beside her Dr. Green, played by the veteran American thespian, Dustin Hoffman. Dr. Green is a criminal profiler and tells Samantha that he is there to help her remember details regarding her abduction and help her identify the perpetrator. At the same moment, Genko is drawn once again in his old investigation as he is determined to find out what happened to Samantha and who is the kidnapper.

The movie is narrated mainly through Genko's perspective and there are a few interjecting sequences from the hospital where Dr. Green is struggling to form a thorough picture of what truly happened to Samantha who is heavily drugged with a potent psychotropic substance and mostly unable to recollect a single thing from the last fifteen years of her life. The only thing she can remember is a place that she calls "The Labyrinth", a maze inside which she was forced to play wicked games in order to entertain her sadistic captor. The director hints to possible unreliable characters and the audience should be reluctant to trust any of the main protagonists of the film as nothing is what it seems in Donato Carrisi's universe. His readers are well aware of that fact, so the advice is addressed to those who haven't read a novel written by the Italian artist. What struck me most in this movie and determined my final -reticent- assessment of it was the problem with its pacing which is manifested to the eyes of the audience as a lack of any sense of continuity in the story. At many times during the film's running time, I got a sense of disruption in the stream of narration that was both confusing and disturbing. The climax is almost non-existent and the final twist(s) is foreseeable and anticipated. Perhaps this is also a problem in the novel too, but even so, the director had the opportunity to present his story through a completely different medium and should be more careful with major aspects such as the tempo and the continuity of his narration.

Apart from the above observations, Into the Labyrinth has some nice qualities having to do mainly with the cinematography and the performances by the actors in both primary and supporting roles. The photography of this film is exceptional, reminiscent in that sense of The Girl in the Fog, with the prominent use of the red and black colors that create a grotesque atmosphere, aligned with the movie's chaotic plot. Toni Servillo gives once again a solid performance as the persistent, moribund private investigator who is obsessed with the case and will do anything to solve it. Dustin Hoffman doesn't have much screen time, but he is also befitting in the role of the mysterious Dr. Green. I am an ardent fan of Italian crime films and perhaps that's why I always set my expectations a bit higher than usual, thus becoming easily disillusioned. The conclusion is that Into the Labyrinth is not a first-rate thriller and cannot be compared with the superb, Girl in the Fog or other recent European crime film productions like Contratiempo or Suburra. If you are a fan of Donato Carrisi's body of work, you shouldn't miss it while fans of Euro-crime would certainly want to add this film in their record. 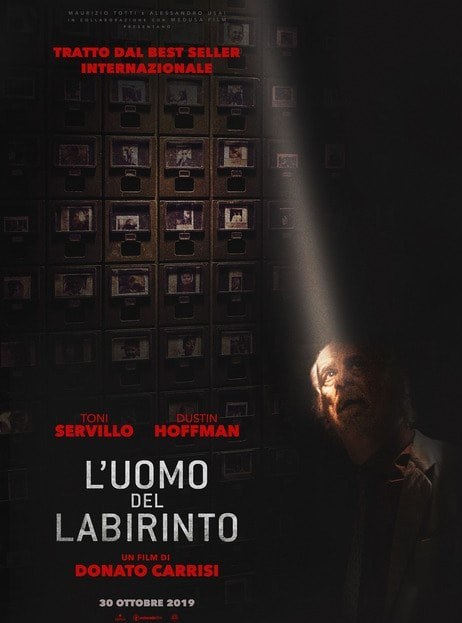