Inside the Critics’ Circle: Book Reviewing in Uncertain Times

Literary evaluation through a phenomenological lens. 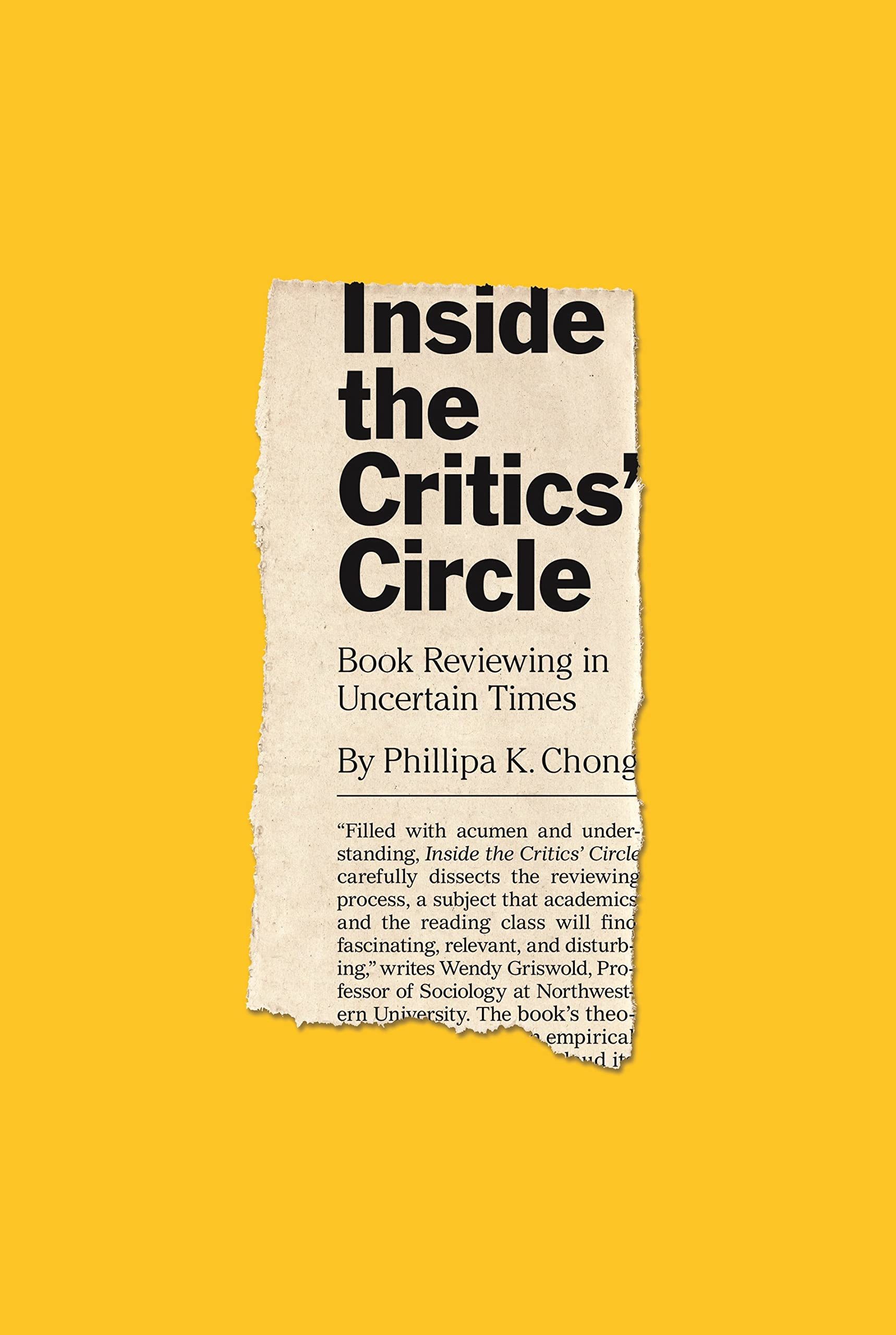 "Without books, indeed, without the news of such books -without literacy- the good society vanishes and barbarism triumphs". (Wasserman in Columbia Journalism Review, 2007)

After finishing reading The Slippery Art of Book Reviewing by Mayra Calvani and Anne K. Edwards, I did a bit of research to find more books on the same subject and stumbled upon Phillipa K. Chong's Inside the Critics’ Circle: Book Reviewing in Uncertain Times, a book that is a part of Princeton Studies in Cultural Sociology Series and one of the few scholarly inquiries in literary evaluation currently available. The author treads into the field of academic sociology, and more specifically sociology of valuation, conducting an interview-based study on the process of book reviewing as cultural production in relation to the contextual uncertainty inside which critics function nowadays. The primary task of the sociology of evaluation (or valuation) is to interrogate "how people determine the value of worth of social entities and the process by which entities acquire worth and value". The French intellectual Pierre Bourdieu, one of the most prominent representatives of that particular branch of sociology, is mentioned briefly by the author in the introduction where she explains the nuances of the concept. Chong adopts a purely phenomenological approach to the subject matter, allowing the 40 research subjects to relay their subjective experiences and perceptions regarding their work, the motivation that drives them, the desired goals they wish to achieve and the criteria and interpretive frames they use in the process of literary evaluation. As the author states, her main objective is to "provide a phenomenological portrait of reviewing that details how critics experience and understand the process and work of being a reviewer".

One of the book's key concepts is that of uncertainty, which is ever-present in various forms, in the field of aesthetic evaluation and mainly arises from the complete lack of consensus regarding the establishment of fixed standards by which the critics should perform their work. The absence of objective tools for aesthetic judgement forces the reviewers to develop their own, personalized assessment method and this utterly subjective practice that may come across even as arbitrary and chaotic in its nature, is the only "truth" that matters when we are talking about art criticism in general, a part of which is the evaluation of works of literature. From the introduction, that provides a thorough picture of the book's contents and intentions, Chong is quick to draw a distinction between "traditional", or "professional" reviewing, referring to those critics who work for high-circulation newspapers and the "amateur", or "reader-reviewers", whose emergence coincided with the rise of social media in the digital age, a controversial phenomenon that, nonetheless, offered ample opportunity to virtually anyone to express his opinion on books that he relished. Chong observes that the traditional/professional reviewing is currently in a sharp decline and cites some examples of major media outlets that reduced their reviewing staff to the minimum during the last few years. The friction between these two types of criticism has become a subject of debate with many analysts speculating that the professional reviewing is slowly dying and the power of constructing and shaping the cultural meaning of books is left in the hands of the many online literature aficionados who thrive in websites such as Goodreads and Amazon.

Chong is careful not to link the impact of book criticism with their commercial value, that is the sales, as she seems to hold the reviewers in higher esteem, considering them "cultural producers in their own right" while also mentioning that there are some scholars that even conceptualize reviewers as "cultural consecrators" adding a religious, enshrining tone to their assessment. The point is that book reviewers are more than mere PR agents whose main task is to promote the books as a commodity since they possess the superior power to confer artistic legitimacy to the texts, a mission that renders them an integral part of the overall literary process and culture. After clarifying that important point, Chong moves forward to the core of her study that explores the reviewer's perceptions of themselves, always in relation to the omnipresent uncertainty that dominates the field of aesthetic evaluation. Inextricably associated with the concept of uncertainty is that of vulnerability, a feeling experienced by a major part of the study's research subjects. Chong writes that "the critics I interviewed experience a great deal of vulnerability while performing the work of reviewing". Those feelings can be interpreted as major stress and insecurity caused by a number of factors, either external or inherent to their discipline. In order to pinpoint the source of uncertainty and the subsequent feelings of vulnerability harbored by the critics, Chong establishes a threefold division, discerning three separate branches of uncertainty: epistemological, social, and institutional.

Each type of uncertainty is more consistently explored in the relevant chapters. Thus, the reader learns that epistemological uncertainty is a byproduct of the quality uncertainty, an inherent problem faced by those who criticize any work of art. In order to assess whether this type of uncertainty is high or low, we need to take a look at the degree of quality uncertainty related to a specific entity. Epistemological uncertainty is high "when we are dealing with entities whose quality is uncertain, but ultimately knowable" and low "when entities are characterized by radical quality uncertainty". The addition of the adjective "radical" is employed to illustrate those cases where it's impossible for the subject to obtain any kind of objective knowledge about an entity. Moving on, Chong explains social uncertainty as "the critics' inability to predict how relevant others will respond or react to their evaluation" while the only way to determine its degree is the possibility of being able to know and anticipate the consequences of the reviewer's work. A prime example of social uncertainty is the dominant tendency among book reviewers to write overly positive pieces, especially when they suspect that their work is going to be read by a significant other such as the author of the book at hand. Finally, institutional uncertainty "concerns the degree of clarity and consensus regarding rules and procedures for behavior and the broader significance of meaning of the work involved in reviewing". Institutional uncertainty skyrockets in "unsettled times", a time period during which the a priori cultural, symbolical, and ideological meanings dictating all aspects of human behavior are challenged and become subjects of open discussion.

Inside the Critics’ Circle is first-rate academic research on a demanding subject that itself imposes the use of certain methodological tools, something that the author seems to have grasped from the beginning. The compilation of the proper questionnaire, craftly designed in such a way as to alleviate the -natural- reservations of the interviewee and make him feel unfettered enough to answer with boldness and candor regarding his thoughts and feelings, is no small feat and constitutes a major victory for Phillipa K. Chong. While strictly academic in its origins, the book is not written exclusively for scholars and scientists as the arguments are presented with patience and great care, grabbing the attention of the reader whose interest is piqued by the abundance of information gathered by the research subjects which is then organized and introduced with great eloquence by the author. The text is simple and austere, being adherent to the rigorous academic guidelines, but remains accessible to the layman, with the condition that they possess a minimum of educational background. I've greatly enjoyed this experience that brought back a lot of memories as my bachelor studies were on sociology and it's been long since I had the chance to sink my teeth in such a comprehensive study. The fact that since the beginning of 2020, I write my own book and film reviews on this website was an additional reason that deemed the perusing of this title unavoidable. Chong's research was published by Princeton University Press with the grand institution's seal further reinforcing the book's status and guaranteeing the highest quality level possible. Five stars with all my heart.

Inside the Critics’ Circle: Book Reviewing in Uncertain Times