Rage and despair in modern-day France.

Based on the titular novel by Piere Lemaitre, Inhuman Resources is a six-part crime drama featuring a strong social aspect as it is first and foremost a study on the horrors of chronic unemployment as well as a first-rate portrait of a dubious protagonist, Alain Delambre. Alain is a man on the verge of despair as he used to be a human resources manager in a big firm, but got sacked six years ago and now he is forced to work odd, underpaid jobs in order to make ends meet. His relationship with his wife and two daughters is severely affected by his mood swings that sometimes result in violent assaults that put him in more trouble than he already is. In the first shot of the first episode, we watch Alain talking directly to the audience, trying to explain that he is not a violent man, but the harsh conditions of his life after his dismissal made him do things that previously seemed unimaginable to him. It is a very effective introduction to this grim, depressing show and sets the tone for what is going to follow. Eric Cantona, one of the most celebrated French ex-football players is stunning as Alain and his performance is one of the top reasons to try watching the series. Even though Cantona is not a professional actor, his presence on set is so convincing and real that convinces even the most skeptical viewers. Apart from the protagonist though, all the actors do a splendid job in their respective roles while the story unravels at an even pace, accelerating in the last two episodes as the climax is reached. Even though some may find the show to be quite disturbing, not due to the depiction of excessive, gory violence, but because of its claustrophobic, tense atmosphere that pervades all six episodes, I think that Inhuman Resources is one of the best recent French crime dramas released and its heavy emphasis on the sociological aspect of its main theme makes it stand out from other productions of the same genre.

Alain Delambre is a middle-aged family man who struggles with depression and feels suffocated by his current predicament forcing him to accept small-time jobs to provide the absolutely necessary to him and his wife, Nicole (Suzanne Clément). But things will change when Alain gets elected as a candidate for an executive position in one of the most prestigious French high-tech firms. Initially, Alain seems to be reluctant, but soon he becomes obsessed with this prospective new job that will allow him to regain some of his self-esteem and improve his financial situation. But things to be more complicated as the company has decided to stage a mock hostage situation in order to test the candidates' nerves and loyalty. The plan dictates that a group of several armed men will storm into the office where the candidates are waiting for their interview and to put pressure on them in order for the CEO of the firm to evaluate their reactions. Alain, as a former human resources executive, will be one of those who are supposed to interrogate the candidates and test their limits. If he succeeds in his task, then his superiors will offer him the positions he has been craving for more than six years.

Unfortunately, things don't go exactly as planned and Alain decides to hijack the situation by pulling out a gun and threaten both the hostages and the hostage-takers. Everything spirals out of control when the police surround the building and arrest Alain as a terrorist. He gets tried and incarcerated, but this is only the beginning of the story as there are plenty of mind-blowing twists in store for the audience. It is a multi-layered story that changes track midcourse and after the first half where we witness a distressed Alain determined to do literally anything to win this job even if that means betraying his own family, wife and daughters, in the second one we watch Alain facing the consequences of his incontrollable rage, trying to survive in the rough environment of prison. During the course of the six episodes, the audience struggles to identify with Alain who seems to be oblivious of his obligations as a husband and father, but still, there are sometimes when we let ourselves inhabit, just for a bit, Alain's turbulent inner state of mind and disturbed sentimental disposition.

Even though Inhuman Resources is a character-oriented drama, that doesn't mean that it doesn't possess the necessary merits of a tight-packed crime/thriller that doesn't let you down at any time. The last episode takes place in the court where Alain gets tried for his transgressions and offers the best conclusion to this extraordinary story. This show can be seen as a social commentary on class struggle and the diachronic feud between the rich and the poor in contemporary France, but it also casts some light on the protagonist's psychology and motivation that lead to his questionable actions. Alain is not by any chance a likable character but that detracts nothing from his allure as many may even consider him to be some kind of symbol for all the underprivileged people whose sole care in the world is survival. In the final episode, I couldn't help but feel some kind of proximity to Alain as he tried to make amends for his past mistakes and he was dead-set on saving his wife against all odds.

I enjoyed this show a lot and keep in mind that I've already read Lemaitre's book as I am a big fan of his work. Let's not forget that his Camille Verhœven series has been more than well-received by the readership internationally. Inhuman Resources though is one of his most particular and exceptional writing attempts as it is by no means a typical procedural such as the Verhœven novels nor what one could call a pure thriller. It's a blend of social realism and dystopian perspective combined with all the thriller and suspense aspects that made the author so popular inside and outside France. Be warned: this is not an easy-to-watch show and many viewers will perhaps feel a bit repelled, especially during the first half. In many ways, this is a disturbing story featuring broken people, corporate greed, shattered familial relationships, etc. I suppose that it will appeal most to the fans of European television rather than the American audiences. It's not a long series and you can easily binge-watch it in one weekend. I dare to say that it was one of the most daring productions that I've watched during the last few months and watch out for Eric Cantona's performance. It will literally blow your head. 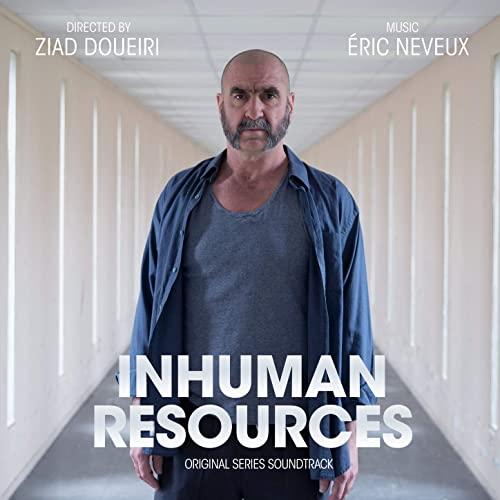