Half courtroom-drama, half murder mystery. 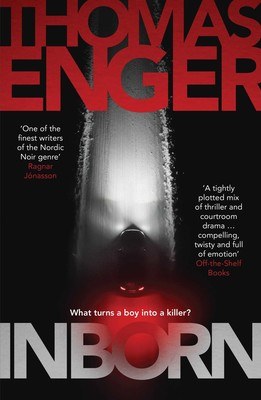 After the exquisite Henning Juul series, Thomas Enger returns with Inborn a standalone crime novel worthy of the author's talent. This book is a fine blend of two genres and the narrative is unfolded in two different timelines, the past and the present, the protagonist is a teenager, Even, living in the Norwegian countryside, in the small town of Fredheim.

The book begins with Even being on trial for the murder of his two classmates, Mari and Johannes. The reader witnesses the interrogation by the prosecutor of the case at the present and in the second chapter he is transferred to the time just after the murders took place. This chronic switching is working perfectly and the chapters are short in length and many of them are ending in small cliffhangers which make the book irresistible to the reader who remains glued to his seat to see what happened and who the killer is.

As the story evolves, each -main- character is briefly (or not) suspected by the local police and the officer in charge of the double murder case, Yngve, who very recently dealt with a personal tragedy as his wife died of breast cancer. The body count rises quickly and the investigation team always seems to end up in square one, as every suspect is proved to be innocent.

The plot of Inborn is intricate and tightly-knit, and the reader never feels dull. This is, in some part, also due to the relatively short length of the novel (under 300 pages) which adds to the fast -though not frenetic- tempo of the book. The ending chapters constitute a roller coaster of plot twists, all plausible and well-put.

The characters are all shady and interesting enough, though some of them seem to only serve the story. Perhaps this is natural for a crime novel which is, as a genre, not so character-oriented as e.g. literary fiction is but, personally, I relish some nice character development in every book I read. This was the only "flaw" of an, otherwise, excellent crime novel recommended for the Nordic Noir fans and all quality crime fiction aficionados.