Elena Ferrante's pondering on the art of literature. 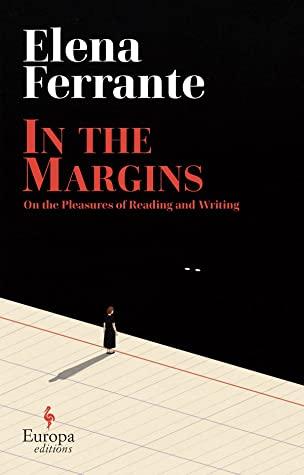 "I believe that the sense I have of writing -and all the struggles it involves- has to do with the satisfaction of staying beautifully within the margins and, at the same time, with the impression of loss, of waste, because of that success".

Elena Ferrante's elusive, enigmatic persona has become a subject of heated debates within the European literary world as her phenomenally influential corpus of work combined with her insistence to keep her identity concealed under the use of a pseudonym, intrigued and continue to pique the interest of the readers and critics around the world. Ferrante is mostly known for her renowned "Neapolitan Novels" quartet, a four-part series of books narrating the evolution of the relationship between two girls, Lenu and Lila, growing up in Naples during the course of the previous decades, beginning in the 1950s. The novels have been adapted into an equally successful television show by Saverio Costanzo who recounts the story as a whole, divided into four seasons, each corresponding to a novel;. The exceptional production values of the series, the magnificent performances, and the accurate representation of a foregone era are integrated into the main narrative that remains loyal to the original source, with carefully crafted dialogue parts and a melancholic atmosphere pervading the story that captivates the audience with its astuteness and the precision in the description of life in Naples after the end of the Second World War.

Apart from Costanzo's series, there are several creators in both cinema and television who attempted to adapt Ferrante's work on screen, the latest example being The Lost Daughter by director Maggie Gyllenhaal, starring Olivia Colman in the role of Leda, a middle-aged divorcee who is tormented by the burden of memories of past choices that she made as a mother and contemplates the consequences for her loved ones. The themes of motherhood, broken family relationships, and the struggles of the contemporary Western woman are thoroughly explored almost in every work bearing the signature of the obscure Italian writer and her novels are a testament on the challenges that women have to face, lost in the multiplicity of the roles they have to assume today. For those who wish to learn more about Ferrante's impact on the contemporary artistic world, there is the documentary Ferrante Fever by Giacomo Durzi in which people from various fields of social, political, and cultural life such as Hillary Clinton, Roberto Saviano, and Jonathan Franzen attempt to analyze the sensational phenomenon of Ferante's success, analyzing parts of her work, while trying to pinpoint that special element which deems her writing style as one of the most arresting in the contemporary European literature.

In In the Margins: On the Pleasures of Reading and Writing, Ferrante chronicles her first experiences as a reader during her childhood, while in the course of four separate chapters explains her perspective on writing, approaches the concept of truth in the literary context, ponders on the limitations imposed by form and genre and explores more subjects relating to her experience as an author. She also cites quotes from authors and books that left a mark in her mind and heart, finally determining and shaping her own distinctive style. The first three chapters in the book ("Pain and Pen", "Aquamarine", "Histories, I") were initially written in the form of lectures intended to be given in the University of Bologna on three successive days in the autumn of 2020 but the outburst of Covid-19 pandemic forced the organizers of the seminar to cancel the speeches which were however presented in Teatro Arena del Sole in Bologna in November of 2021 by the actress Manuela Mandracchia. The fourth essay, "Dante's Rib" was composed at the invitation of the Association of Italianists (ADI) and concluded the conference Dante and Other Classics on April 29, 2021.

In the first essay, Ferrante states that her first impressions from literature were, almost exclusively, drawn by male authors and from an early age, she realized that being a female would prove to be be an impediment in her attempts at producing original literary work: "Although I was a woman, I couldn't write as a woman except by violating what I was diligently trying to learn from the male tradition". Furthermore, she makes an important distinction between the two only ways of writing which she recognizes: "the first compliant, the second impetuous". That distinction remains important and topical throughout the course of this little book and dictates the manner in which Ferrante presents and assesses her own work. The relationship between the two aforementioned modes of writing constitutes the main subject of the first essay. The Italian author advocates for the essential multiplicity of the "I Who Writes" by citing two passages from Virginia Woolf's work arguing in favor of a fragmented writing ego and concludes her reasoning with the aphorism: "The writer has no name". Perhaps that is the reason why Ferrante is so insistent on keeping her true identity hidden from the public as she perceives her writing selfdom not as a unity but as a multiplicity of egos colluding in order to create a work of fiction which is decisively reduced to a "convulsing act" carried out by the author instead of "an elegant studied gesture".

Both in the first and the third essay, Ferrante talks about the inevitability of form which is, in Samuel Beckett's words, "the only thing we can't do without in literature and any other place", though she believes that it is possible for an author to both abide to and deny the rules of citing as an example Gertrude Stein's book The Autobiography of Alice B. Toklas in which the author "takes a highly structured genre like autobiography and deforms it", through the use of breakthrough narrative techniques balancing "in a complex interplay of identification and estrangement" that allows the author to find his own voice. In the end, Stein "upends the traditional relations between invented story, autobiographical truth, and biographical truth". Of course, as Ferrante is eager to ascertain her readers, there is no parthenogenesis in literature. The writer is forced to to adopt words and phrases that have been previously used by other writers in similar or different contexts. As she explicitly declares: "we have to accept the fact that no word is truly ours" and she also points out that "writing is, rather, entering an immense cemetery where every tomb is waiting to be profaned". What Ferrante means is that the basic tools of an author, words, are only accessible through the mere act of reading texts written in the past. She also writes that "true sentences, good or epochal, always seek a path of their own within cliches. And cliches were once true sentences that dug a way among cliches".

Throughout the book, Ferrante mentions passages from the works of many significant authors such as Italo Svevo, Adriana Cavarero, Virginia Woolf, Fyodor Dostoyevsky, Samuel Beckett, Emily Dickinson and others who support her solid arguments regarding the subject of truthful writing and its inextricable link with fervent reading. In the concluding essay, she focuses on the work of one of the founders of the modern-day Italian language, Dante Alighieri, whose works set the precedent for other important writers such as Petrarch and Boccaccio who would follow, adding their own genial contribution and establishing the basis of modern European literature. Ferrante first read Dante at the age of sixteen and since then his work heavily influenced her way of thinking and writing. According to Ferrante, Dante was the ideal reader as he "entered the others' worlds so inanimately that he was able to capture their secrets of meaning and beauty, and achieve through them a writing of his own". She also writes that his conception of Beatrice's character, Dante's muse and inspiration for writing the Divine Comedy, was way ahead of its time as until then, women were mainly portrayed as silent creatures with little or no tendency to the the more noble aspects of cultural and spiritual life. Beatrice, though, is a symbol of a woman who "has an understanding of God and speculative language" and her character summarizes "what is possible for women", something that evokes Ferrante's feelings of gratitude for Dante.

It would be an unforgivable omission not to mention Ferrante's New-York-based permanent translator, Ann Goldstein, who has been honored with a Guggenheim Fellowship and is the recipient of the PEN Renato Poggioli Translation Award. Goldstein's interpretation of Ferrante's original texts is flawless and the English-speaking readership is fortunate enough to relish the Italian author's prose without losing anything from its finesse and beauty. In the Margins is not an easy book to read and you will have to revisit some of its most arcane passages in order to fully grasp the concepts and ideas which Ferrante so aptly handles. It is a great addition to the long list of invaluable books on writing and those who aspire to write someday should definitely get their hands on a copy as soon as possible. For me, this book was a great chance to get acquainted with one of the most ambiguous, cryptic writers of our era and provided plenty of thoughts to chew on, while prompting me to watch the television and film adaptations of Ferrante's books that look promising. Soon, I will start reading one of her fiction novels and a thorough review will follow.