At a lower quality level than A. Dahl's previous work. 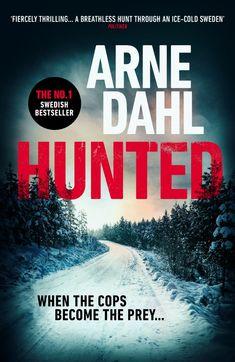 Hunted is the second novel in the new Sam Berger/Molly Blom series, written by the Swedish literary and crime fiction giant, Jan Arnald (Arne Dahl is his pen-name). Unfortunately, the book is worse than the first one in the series (titled Watching You) and far away from the excellent Intercrime series books that made Dahl a superstar in Scandinavian crime fiction. I'm not claiming that this is a non-readable crime novel but it lacks both in terms of plot and suspense that were present in Watching You. The two protagonists, though well-crafted and interesting as characters, don't manage to engage the reader in their storylines and seem to wander in a contrived, serial-killer plotline which is reminiscent of second-rate crime novels written by less talented authors of the genre.

On the plus side, some nice twists near the end add a nice flavor to the -unoriginal- story and the setting in wild, frozen Lapland in the northernmost part of Sweden. Perhaps, the high standards of characterization in Intercrime series (definitely one of the best in SCF genre) are hard to achieve, but I would expect a lot more from an author of Arne Dahl's caliber and certainly not a crime novel that the reader will forget in a few days after reading it. I want to believe that the next book in the series will be better and worthy of the author's talent and character. Those who are not familiar with the writer's work will better check out first the A-Gruppen series.