How to Find Your Way in the Dark 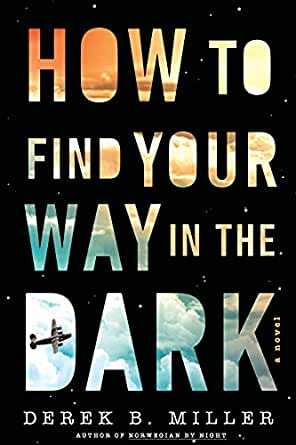 We met Sheldon Horowitz, the 82-year-old American Jew living in Norway and struggling to adapt to the European ways, in Derek B. Miller's highly esteemed debut, Norwegian by Night, a novel that won the illustrious CWA Blood Dagger Award in 2013. In this book we witnessed Sheldon's frantic attempts to save a young immigrant kid from his murderous persecutors despite his old age and ailing health. His high moral stand and distinctive sensitivity allowing him to form a special kind of bond with the foreign kid made him one of the most sympathetic protagonists in the genre while his personal history, which is revealed gradually through the course of the novel, deemed him a humanlike character who bravely fights the demons of his past. Miller's magical pen weaved an exciting story, written in a prose of sublime beauty only comparable to that of the greatest contemporary American fiction writers.

In How to Find Your Way in the Dark, the author transports the reader back in time in order to narrate Sheldon's journey towards adulthood and the events that formed his personality. It's a tragicomedy in three parts in which the reader gets the opportunity to trace the beginnings of the beloved character through the tough years of the Interwar period and the Second World War. As a Jew living in the U.S., Sheldon and his family always had to be vigilant as the rise of Anti-Semitism all over the world influenced their lives and made them wary against the gentiles. All the main characters in the novel are Jews and thus subjects of racial prejudice and mistreatment.

The rich text is further embellished with many references to the socio-political context of the time, providing valuable information about the politics of discrimination against the Jewish population both in Europe and America. There are plenty of dialogues where the voice of the oppressed is raised, especially through Abe's character, and we can take a glimpse into the minds of the protagonists who realize that they will have to survive in a hostile world and the only way out is to take their lives into their own hands. Sheldon, Lenny, Abe, and Mirabelle are all vigorous characters who comprehend that apathy is their biggest enemy and their actions are driven by a dynamic, life-affirming disposition.

The action begins in 1938 in New England with 12-year-old Sheldon travelling back home with his father, Joseph, after the one-year anniversary of his mother's tragic death in a fire at a movie theater. Joseph's car is bumped off the road by another truck, driven by a man with a mustache looking like a wiseguy. Joseph dies on the spot, but Sheldon manages to flee the scene almost unharmed. He is certain that this was no accident and that the man who drove them to the ditch did it deliberately. Scarred by the loss of both his parents in such a short period of time, little Sheldon swears to take revenge on the people responsible for his father's death. He quickly realizes that in order to do so, he will have to work methodically tracking down the people who can help him and extracting information from them.

After Joseph's death, Sheldon is sent to live with his uncle, Nate, and his two cousins, Abe and Mirabelle. Abe is six years his senior and his fiery attitude charms his little cousin who clings to him in order to learn more about life. Sheldon will embark on many adventures while living with Nate's family that refine his wits and make him ready to fulfil his initial purpose. After Abe's sudden departure, the protagonist will receive a clue concerning the identity of the man who killed his father a few months back. Then, it will be Sheldon alone who will have to end his mission and exact revenge for Joseph.

The story spans across nine whole years during which we observe how little Sheldon reaches maturity by overcoming hardships and facing many challenges. His brilliant intellect and unique intuition always help him to outsmart his opponents even if they are sinister-looking mafiosi and career criminals. His relationship with his cousins is outlined exceptionally by Miller whose skills in characterization reach a whole new level reminiscent of that of classical American writers such as Mark Twain and Ernest Hemingway. Readers who are familiar with Norwegian by Night will better grasp the ingenuity in the writing style while they will also have the chance to re-evaluate Sheldon's character under a whole new light. Of course, it's not strictly necessary to have read the author's previous work, but it would certainly add to the experience.

Derek B. Miller is evolving to one of the most prominent new American fiction authors and his novels are destined to enchant your heart and stir your mind. There is this bittersweet mood permeating How to Find Your Way in the Dark that emotionally touches the reader who keeps turning the pages, devouring every single word of this insightful book. It's a coming-of-age story like none else, featuring nothing derivative or superfluous. This is one of the novels that you read for the sheer pleasure of reading. A solid 5/5 stars.

How to Find Your Way in the Dark