The House of Ashes

A bleak and gripping read. 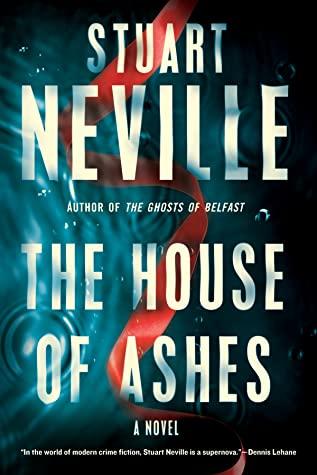 Stuart Neville is one of the exceptional examples of an author who knows how how to expertly weave dark, distressing stories featuring broken, tormented protagonists and the emotional effect of his novels is often overwhelming especially to those readers who are looking for an easy-to-read mystery/thriller. As he has already proved in the excellent The Traveller and Other Stories, the Irish crime writer is a master of the disturbing and the macabre and his work so far is characterized by his almost obsessive engagement with the psychological state of his characters and the motivation that lurks behind their actions. His stories are focusing on the harsh everyday reality of ordinary people, struggling to survive in a hostile environment.

The House of Ashes is perhaps Neville's most twisted and harrowing work to date as the themes of abuse and submission are ever present and constitute the backbone of this novel. It's all about women being mistreated in the hands of vicious men who comprehend their role solely as dominators and victimizers of their female counterparts. The descriptions of the main characters' ordeals are often hard to swallow, nevertheless the author's adroit writing style makes it impossible to put the book down even if the reader often feels severely afflicted by the horrible events depicted on page. It is rare to see a male author employing mostly female motifs such as women empowerment and male chauvinism, but it is done in such a fine taste that the reader is even willing forget the gender of the writer.

Struggling to overcome her mental issues, Sara Keane moves along with her husband, Damien, in a secluded mansion in Northern Ireland, called The House of Ashes. Sara has recently attempted suicide and her state of mind is fragile, so she sees this removal as the perfect chance to wipe the slate clean and refocus her energy on her wellbeing. Damien and Sara share a troubled relationship as the former seems always to have the last word about anything having to do with his wife, thus rendering her idle and weak-willed. As Sara is settling to her new household, she receives a visit from a frail old woman, Mary, who claims that this is her house and that she should leave at once. After the initial startlement, Sara's interest is piqued and she begins a research on the house's past. What she discovers is shocking, unthinkable even.

Mary has lived in the House of Ashes for the majority of her life and her childhood has been marked by the profound maltreatment from a corrupt family which imprisoned young women and treated them like slaves. Through Mary's first-person narration, the reader delves into the history of the cursed house that stretches sixty years back and we gradually become partake of the horrors that she experienced as a little girl. Mary and Sara will get closer and together they will unveil the dark past of the house that is filled with atrocious deeds such as murder, suicide, and arson. The past and present are inextricably connected as the two women have to face similar problems, even if Sara's abuse from her husband is not so much physical, but verbal and psychological.

We watch the story unfold through the eyes of Sara and Mary in alternating chapters, each one narrating in a different timeline: Sara in the present and Mary in the past. As Neville chooses to appoint Mary as a first-person narrator, he doesn't hesitate to let the character speak in her own voice, using all the particular idioms of the past era's language. In an article published in CrimeReads website, Neville stated: "In the past, I’ve shied away from writing with an accent, keeping my prose and dialogue neutral. With this book, I’ve finally allowed my characters to speak in their own voices, the narrative veined with Ulster-Scots dialect. In particular, those chapters told in the first person by Mary Jackson dive fully into the vernacular of her time and place, the words and phrases that lived on the tongues of my grandparents, parents, aunts and uncles, and can still be heard today all across this tiny country". In that way, Neville reaches a whole new level of truthfulness and validity in his writing, even though some words may seem a bit perplexing to the unsuspected reader.

The setting is brilliantly fit into the story as Northern Ireland's wilderness provides the best background for that sad tale to unravel. Neville's descriptions are brief but specific and convey an air of authenticity. Furthermore, he plays with the notion of supernatural intervention that accentuates the suspense and gives prominence to the horror aspect. Sara is always on edge as it seems that the house has a life of its own manifesting itself with the presence of ghost-like figures interlocked with the house's horrid history. As the plot moves onward, the reader witnesses the small changes in the main characters that further develop and result in an attempt to get freed from the shackles of hopeless relationships. The liaison between Mary and Sara is a highly intriguing one and we root for both of them and hope that in the end they will find redemption.

This is not a book for the faint-hearted or those who are on the lookout for easily digested crime/thrillers. Its bleakness and choice of themes may render it repulsive to some, nevertheless it's that same gloominess that makes it so compelling. Stuart Neville is one of the most gifted contemporary European storytellers and his work is diverse and distinct from the mass-produced novels of the genre. The House of Ashes will certainly appeal to Tana French's fans as there are many elective affinities between the work of the two Irish authors. Get ready for a dive into a universe where humans tend to show their worst side and the protagonists strive to withstand abysmal agony. In the end, there is perhaps a flicker of light in the end of the tunnel for the heroines and that makes it worth it.