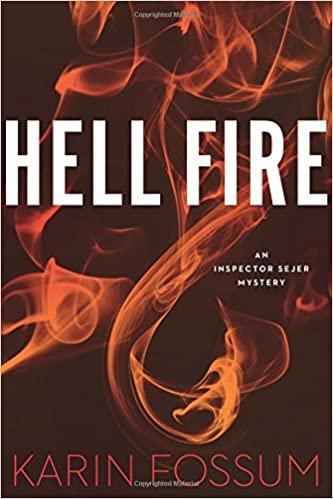 Karin Fossum is a Norwegian author who is widely known for her highly acclaimed Inspector Sejer book series, but who has also experimented with other genres as well, writing poetry, short stories, non-crime, etc. Fossum has won some very prestigious literary awards such as the Glass Key Award for the best Nordic crime novel for the second installment in the Konrad Sejer saga, titled Don't Look Back, and the Los Angeles Times Book Prize. Her trademark characteristics are her use of pared-down prose and the grim storylines that aren't reminiscent of those invented by the contemporary crime fiction superstars like Jo Nesbo, Jens Lapidus, Samuel Bjork, and others. Fossum insists on narrating crime stories that focus on the psychology of the characters rather than a labyrinthine plotline or a strong whodunit element. In Hell Fire, Fossum once again alters her narrative style in order to tell a story about the price of well-hidden family secrets, lies, and misdeeds of the past. The book begins with the pensive, glum Inspector Sejer being on a gruesome crime scene where a young mother and her four-year-old son were brutally murdered by stabbing. That's the case that he, along with his sidekick, Jakob Skarre, will have to solve in order to find both the perpetrator and the motive of this terrible crime. Hell Fire is essentially a whydunit as the reader can easily guess the identity of the culprit really early. Nevertheless, the novel keeps the reader interested throughout its course due to the author's exceptional, austere prose, and spot-on characterization.

In this book, Fossum adopts a multiple-perspective narrative combined with a dual timeline that moves the reader forward and backward from chapter to chapter. First, we follow the story of the two victims, the home-aide carer Bonnie and her little boy, Simon. Then we have another storyline involving another single-parent household where Eddie, a young man in his twenties who has an undiagnosed personality disorder and has many difficulties in adapting to the society, lives with his mother, Mass. The third and final narrative thread is about the murder investigation conducted by the Sejer/Skarre duo. The first two stories are narrated in the past which is set six months before the actual murder and the subsequent investigation. Sejer's and Skarre's story is the only one set in the present. This kind of versatility in the narrative style is the immediate result of Karin Fossum's boldness as a writer. Other books in the same series are following a totally different narrative path and every new novel written by the Norwegian skilled author holds a surprise for the readers.

The story itself is grim and rather depressing as it is true for the majority of Fossum's crime novels, so if you are not yet familiar with her work you may feel a bit morose. There is an all-encompassing bleakness surrounding the story of Hell Fire as it deals with subjects that most readers who seek light-hearted, entertaining, action-packed crime/thrillers tend to steer clear of. Fossum is an author who gained her popularity and readers' respect the hard way, mainly due to her special talent that allows her to delve deep into the inner thoughts of truly unlikable characters that seem to be on the margins of society. She is the best psychological profiler in the universe of contemporary Norwegian crime fiction and if you are interested in similar writing attempts then you ought read at least one novel in the Inspector Konrad Sejer series. You will not regret it.