A silver screen adaptation, equal to the titular novel's level of quality and intrigue.

Gone Girl is one of those rare types of films that are at the same level, in terms of plot intricacy and characterization, with their original source, that is the novel. Gillian Flynn's Gone Girl is her third, in chronological order, novel that was published, after Sharp Objects (won the 2007 Ian Fleming Steel Dagger for the best thriller) and Dark Places, a book which was also successfully adapted to cinema film in 2015 by Gilles Paquet-Brenner, starring Charlize Theron. Gone Girl received wide praise and many compliments, and it is considered to be Flynn's tour de force, a crime/mystery novel narrated by -more or less- unreliable characters' point of view, a fact that forces the viewer to remain vigilant for the 2 hours and half that is -approximately- the movie's running time.

The story revolves around the two protagonists, Nick and Amy Dunne, a married couple which seems to be totally in love with each other at the beginning of their relationship, only to find out in time, that they fell in love with an illusion of the other that they built themselves. The intricate, though not hard to follow, plot of the film begins to unfold when in the day of their fifth's wedding anniversary, Amy (Rosamund Pike) disappears from the house and seems to be gone for good. Her husband, Nick (Ben Affleck), is shocked at first and seems to be willing to do whatever is necessary to find out the truth behind his wife's action, but slowly it becomes obvious that Amy had set him up for her -supposed- murder. Through Nick's conversations, mainly with his twin sister, Margo, the viewer discovers that things were not what they seem and the marriage of Nick and Amy was far from being ideal. As the days pass and Amy is still missing, the police begin to unearth the clues that Amy had left them in order to incriminate Nick and after finding the -possibly- murder weapon they arrest him.

This is a -condensed- synopsis of the film's first one hour and the following 90 minutes has a lot of twists and turns in store for the viewer who must not lose his focus in order to fully enjoy the viewing experience of one of the best crime films of the year (2014). Gone Girl is a film, having two truly shady protagonists which are hard to like, much more to identify with, but this doesn't mean that they are not brilliantly outlined and fleshed out, as well as alluring and enthralling. Rosamund Pike's performance is a great one but unfortunately, Ben Affleck's acting is below expectations and perhaps with another actor in the role of Nick, Gone Girl would be irresistible. David Fincher's direction is unblemished -as always- and guarantees an unforgettable artistic achievement, a movie that the audience will remember for years to come as one of the iconic flicks of the crime/mystery genre.
If you still haven't watched it, do it without giving it a second thought. You will be thoroughly entertained and intrigued by this fabulous storyline and plot. 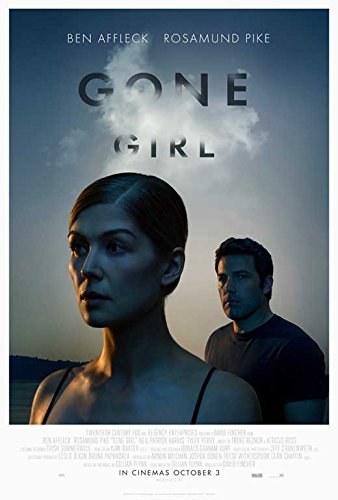