A more than successful silver screen adaptation of a bestselling Dennis Lehane novel.

This movie is based on the fourth installment in the Kenzie&Gennaro book series, written by the prominent American crime fiction writer, Dennis Lehane. It is directed by Ben Affleck who, in his first attempt behind the camera, delivers an excellent crime film, tight-plotted and with great characters. The performances by the main actors, especially those by Ed Harris and Casey Affleck, are top-notch while the tempo of the story's unraveling is such that it never wears the viewer down. Morgan Freeman plays a secondary, though crucial, character and he nails the role as well.

The story revolves around a child disappearance and the plot begins when the uncle and aunt of the missing girl, little Amanda, ask from Patrick Kenzie and Angie Gennaro, two private investigators with a lot of connections to Boston's underbelly, to help them with the investigation. The tough city neighborhoods seem to be the most appropriate setting for a crime story to take place and Boston is a character in itself, as it is true for many of Dennis Lehane's novels. There is a lot of mystery, little doses of suspense and some great twists that make the film one of the best films of the genre for the 2000-2010 period. The finale is thorough and satisfying, giving all the answers to the -many- questions raised by the complex and elaborate plot. In my opinion, Gone Baby Gone along with Mystic River (2003) is the best big-screen adaptations of D. Lehane's crime novels and two of the modern classics of this kind of film. 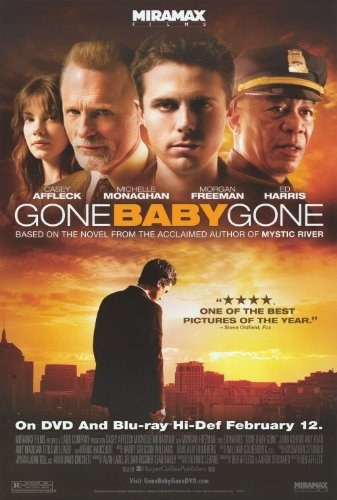