"We all search for something. Madness is the quickest way to find it".

Oriol Paulo is an artist who never ceases to amaze and his latest feat, God's Crooked Lines is a plot-driven and suspense oriented thriller, which plays with the audience's assumptions concerning the story until the final scene that leaves some of the questions raised during the unfolding of the twisty plot open to interpretation. The Spanish director and screenwriter has established himself as the contemporary European "thriller master" as the majority of his works, including The Invisible Guest, Mirage, and The Body, feature intricate plotlines full of surprises and unforeseen revelations, urging the audience to rethink about what they'd already watched as well as mind-blowing endings deeming them indelible to the viewer's mind and heart. In God's Crooked Lines Paulo remains loyal to his customary recipe, introducing an ambiguous protagonist, Alice, played by the popular Spanish diva Bárbara Lennie, whose reliability is meant to be challenged by the audience as the number one question in respect to the story can be summarized like this: Is Alice a mentally ill woman whose words cannot be taken for granted or are her claims about her identity and intentions sincere and valid? Never losing track of that thought, the audience witnesses the unraveling of the downcast, in terms of atmosphere, story taking place in a mental health facility in Spain circa 1980.

The movie is based on the namesake novel written by Torcuato Luca de Tena (original title: Los Renglones Torcidos de Dios) in 1979, and the screenwriters, director Oriol Paulo, Guillem Clua, and Lara Sendim, deliver an adaptation worthy of the original source, with the final result being reminiscent of Martin Scorsese's 2010 blockbuster Shutter Island, also based on a novel by Dennis Lehane, in terms of setting and narrative tropes selected by the creators. Both films share a similar mise en scène , mental health hospitals or sanatoriums, feature a complex plot and a protagonist whose sanity is, at least, debatable. In God's Crooked Lines, we watch as the story unfurls through two timelines, the past and the present, with the frequent, extensive flashback sequences filling in the blanks created by the current timeline narrative. The script, though not entirely devoid of flaws and dysfunctional moments, is tight enough to make the storytelling feel smooth while the non-linear aspect of the narrative bolsters the suspense that dominates the film as a whole, throughout its -lengthy- runtime that exceeds 150 minutes. The pacing is a bit uneven, with the first half being a bit of a drag and the second one accelerating and enrichening the plot with new facts while raising more questions for the audience to contemplate.

The story commences with Alicia being admitted in a mental health care facility under the pretext of suffering from paranoia that led her to make several attempts on her husband's life by poisoning him. Alicia's first contact with doctor Ruipérez (Federico Aguado) is accompanied by a letter addressed to the clinic's staff and explaining that Alicia is a first-class manipulator who lies frequently in order to get what she desires, further describing her as highly intelligent despite her propensity for deception. In fact, Alicia voluntarily checks in the hospital on her capacity as a private eye in order to investigate the death of a patient, Damian Garcia del Olmo, that occurred a year earlier and was dismissed by the medical staff as suicide. Alicia was assigned to this task by the victim's father who also arranged the details of her admission in the facility. From then on, Alicia will have to plough her way through an impossible terrain where nobody can be trusted, neither the other patients nor the doctors led by the devious, untrustworthy Samuel Alvar (Eduard Fernández). As things get harder and Alicia gets attacked by a man intending to rape her, she will realize that there is no way out from the hospital and that she has only herself to count on.

The first scene sets the tone for the rest of the film as the audience will at many parts wonder about the protagonist's state of mind and mental health equilibrium, while also foreshadowing the open-ended finale urging the viewer to form his own theory about Alicia's soundness of mind. The back and forth jumping in time could be handled better and there were times that I had to stop and go back in order to comprehend the significance of a past sequence. However, if you are attentive enough, you will definitely get the gist of the intricate story along with the many details that comprise the film's multifaceted mosaic. Objectiveness is non-existent in the director's fictitious universe, and each argument is cloaked in the color of gray, evidently suggesting to the audience that every form of experience cannot be assessed without first determining the subjective element that shapes out principles, beliefs about others and even our memories that provide substance to our identities. The twists retain their effectiveness due to their meticulous placing in crucial moments within the story, while the vivid cinematography by Bernat Bosch is brimming with lively colors thus making an interesting juxtaposition with the bleak setting and the somber characters framing the protagonist.

As the story is set in the faraway 1979, the audience gets the opportunity to witness the professional approach regarding the treatment of the mentally ill at the time, in an environment influenced heavily by the bio-medical model and the prevalent doctrines of Freudianism posing sex and sexual desire as the prime factors affecting the mental health of the individual. However, God's Crooked Lines certainly doesn't aspire to be a history lesson on the ills of the medicalized approach to madness as existed during the previous decades, and focuses on the suspense created by the dubious narrative and the thrills generated by the constant upending of the audience's speculations through the screenplay's mystifying quality that brings to mind Paulo's earlier works, especially The Invisible Guest, his magnum opus and a reference point for the thriller movies succeeding it. Even though the Spanish director and screenwriter's latest feature stands at a level below the 2016 immensely successful thriller starring Mario Casas and Jose Coronado, it still succeeds in winning over the audience who craves for inventive stories lacking the hackneyed tropes of the genre, so rife in today's productions.

The characters depicted on-screen, except for Alicia, stand out due to their oddities that define them. The protagonist is surrounded by midgets, mutes, schizophrenics, hysterics, and patients suffering from unheard-of conditions like hydrophobia, the fear of water. At one point, the director of the facility, the cold-hearted and cynic Samuel Alvar wonders: "What kind of God permits such imperfections?", leaving the audience in no doubt regarding his stereotypical approach to his patients and their potential for amelioration. The medical staff, with some notable exceptions, is outlined as completely detached from the humane side of their vocation, treating patients as a cluster of symptoms that must be eradicated during treatment. Bárbara Lennie delivers the most striking performance of her career so far, and her presence commands the screen in a story that is centered around her character. The secondary cast includes some more popular Spanish actors who make the most of their roles while the music by Fernando Velázquez adds the final note to a title worthy of your attention as one of the most enticing thrillers featured by Netflix during the last few months. Give it a try and you won't regret it. 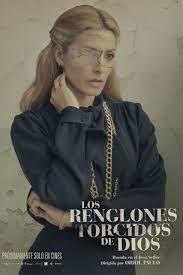