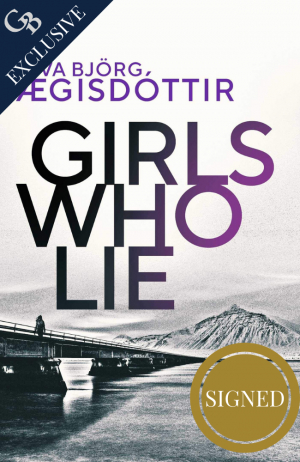 Eva Björg Ægisdóttir returns with the second installment in the "Forbidden Iceland" saga featuring detective Elma, a young police officer who lives in Akranes, a town on the west coast of Iceland and deals with a number of complex investigations along with her limited circle of colleagues. Akranes is also Ægisdóttir's hometown, even though today she resides in Reykjavik. Her debut, The Creak on the Stairs, has been more than well-received by the global readership and Eva established her name as one of the most prominent contemporary Icelandic crime authors. Even though I really enjoyed the first book, I need to state that Girls Who Lie is a much more mature novel where the author proves that she has developed her writing style as is evident to whoever reads this well-crafted text. In terms of genre categorization, this is a straightforward police procedural with some splashes of mystery and whodunit. The first half of the book unravels slowly as the investigative team runs to a brick wall every time they think that they may have found a valid lead, but in the second part, the tempo accelerates and beware of a major rug-pulling moment at the beginning of the third and final act. Ægisdóttir plays with the reasonable assumptions that the reader makes as he follows the story and the twist comes out of the blue thus making the reading experience all the more enthralling. The themes that the author explores are similar to her first writing attempt, the well-hidden secrets of families, the devastating effect of lies and their consequences, the plague of bullying and intimidation to weaker children and many more.

Seven months earlier, a young, troubled woman, Mariana, disappeared from the face of the earth leaving only a cryptic note to her only daughter, Hekla, and the case is initially dismissed by the CID as either a case of suicide or they think that Mariana vanished of her own accord. When the body of a young woman turns up in a cave in the Grabrok lava fields, Elma and her team quickly identify the victim as Mariana. Thus now it is a homicide case and the lead detectives will have to return to their initial investigation that took place half a year earlier when they were still just searching for a missing woman. Soon, they realize that their attempts to find Mariana have been less than satisfying and there are a lot of holes and unanswered questions that now are part of a serious murder case. Elma, who is the protagonist in the story, is drawn into a world of dysfunctional family relations, abuse, and horrible secrets from the past that resurface as the plot moves forward. At the same time, we get some glimpses into her personal life and state of mind as the author makes sure that we get some time peering into Elma's inner thought process and become acquainted with some distressing events of her past that haunt her until today.

Hekla is a teenage girl who grew up with a mother that constantly reprimanded and belittled her and she was placed in foster care at the age of three after Marianna abandoned her all alone in the house and got lost on a drug-fueled binge. Child Protection Services intervened and sent Hekla to a wealthy middle-aged couple who came to love her as a true daughter. After a while, it was clear that Hekla preferred to stay with her support family and wished as little contact with Marianna as possible. This fact elicited a lot of tension between the girl's biological and foster mother, as they had to quarrel for nearly all the matters regarding Hekla's upbringing. Hekla seems to be a person of key interest to the investigation and Elma's instinct is further confirmed when she realizes that the girl has a lot of secrets and catches her lying in some circumstances. Through Hekla's questioning, several crucial points emerge and the investigators begin to question her behavior while at the same time deciding to look more closely in her circle of friends and acquaintances. Hekla's story is a bit sad and it may distress a sensitive reader as in many parts she narrates her nightmarish childhood, living with an unstable parent who couldn't even take care of herself. At some point, Elma wonders if the Child Protection Service's insistence to keep a biological family united, even when extreme cases of abuse are involved, serves any true purpose and broods about the lack of a proper, meaningful orientation of relevant institutions.

Ægisdóttir employs, once again, the double narrative and we follow the story through the penetrating description of the stages of an active murder investigation while at the same time, we witness the narration of a woman whose identity is not revealed who chronicles her life after giving birth to an unwanted child. These interjecting chapters add a more mysterious flavor to the text and the reader keeps wondering about the connection of the woman's sad tale with the main plotline that revolves around Mariana's murder. Of course, everything is explained in the last part of the novel that leaves a rather sweet taste and meets the expectations of the most demanding crime fiction fans. There is nothing missing from the mix and it should be also mentioned that the setting of the novel is wonderfully outlined by the author. It helps, of course, that Akranes is the place where she grew up, so she has first-hand knowledge of the place and the peculiarities of the small Icelandic community. The characterization is fulfilling and we very quickly become comfortable with the main characters and familiar with the relationships between them. Perhaps, I would like some more background information concerning Elma's personal history as it is hinted that she has to bear some highly traumatic scars from her past.

I found Girls Who Lie to share some elective affinities with Yrsa Sigurðardóttir's latest "Freya and Huldar" series as both authors' books seem to adopt a similar narrative pattern while at the same time retaining a strict police procedural character that is reminiscent of the mood and tone of other momentous Nordic crime writers such as Ragnar Jonasson and Arnaldur Indridason. Eva Björg Ægisdóttir is now in the same league as the most important names in the genre and her work leaves promises for an even more enticing future. It seems that her talent equals her great looks and I'm sorry to have to wait for a full year for the next installment to arrive. It should be noted that the Icelandic author stated in an online interview that she is currently writing the fourth novel in the series, but, unfortunately, Girls Who Lie is the latest English translation of her work. Looking forward to more.