A theater play adapted for the big screen by Ron Howard.

Frost/Nixon was originally a 2006 British theatre play, directed by Michael Grandage and written by Peter Morgan, that moved to Broadway in 2007 for 137 performances. The two main protagonists, David Frost and Richard Nixon were played by Michael Sheen and Frank Langella respectively and their performances were so good that the film director, Ron Howard (A Beautiful Mind, Apollo 13) demanded the same actors otherwise he would quit the project altogether. His extraordinary insistence was vindicated as Langella is perfect in the role of the sulky President Richard Nixon who never managed to make anything else than enemies throughout his political career that ended ingloriously due to the infamous Watergate scandal. Nixon was forced to resign after the scandal broke out and Americans were enraged with Nixon's reluctance to assume responsibility for major wrongdoings such as obstruction of justice and shady deals with other politicians leading to the exoneration of blatant crimes. It should be noted that Nixon was the first American President to resign from his position, an unprecedented phenomenon for the U.S.

The movie begins right after the Watergate scandal and Nixon's resignation from the Presidency, the audience watching a quick montage of news bulletins that rapidly recapitulates the pivotal events that followed. After that, we are introduced to the other protagonist of the movie, David Frost, an English talk-show host widely known to the audience for his comical side rather than his political thought and investigation. We see Frost as he hatches the plan to interview Nixon for the first time and the first half of the movie revolves around the obstacles that Frost and his production team had to tackle to succeed in their goal. The most urgent problem, of course, was the money that Nixon asked for the interview, a total sum that exceeded half a million USD. Frost searched for sponsors, only to be let down by the mainstream American media that didn't trust him for holding an intriguing conversation with such a controversial political figure. Frost's past as an entertainer television persona made things difficult for him in this project but finally, he managed to cut a deal with Nixon's team. The "Nixon Interviews" were recorded and broadcast on television and radio in four programs in 1977 and the twelve -in total- interviews began on March 23, 1977, with three interviews per week over four weeks.

The second half of the movie is concentrating on the actual conversations between Frost and Nixon and the bizarre relationship dynamics between the two protagonists. Frost is desperate to prove to himself and the others that he is a serious journalist who can follow through this challenging task and can look the ex-President in the eye even when directly accusing him of breaking the law. Nixon, on the other hand, wishes to preserve his legacy alive and armor himself against the -many- accusations thrown to him by the American media. I wasn't aware of this debate so the film had a rather interesting historical dimension for me and Frost/Nixon is a movie that will appeal to those who want to know more about the American political history of the twentieth century. Another reason to watch this film is the quality of the performances by both the protagonists and the actors in the supporting roles, including, inter alia, Kevin Bacon, Sam Rockwell, and Oliver Platt. 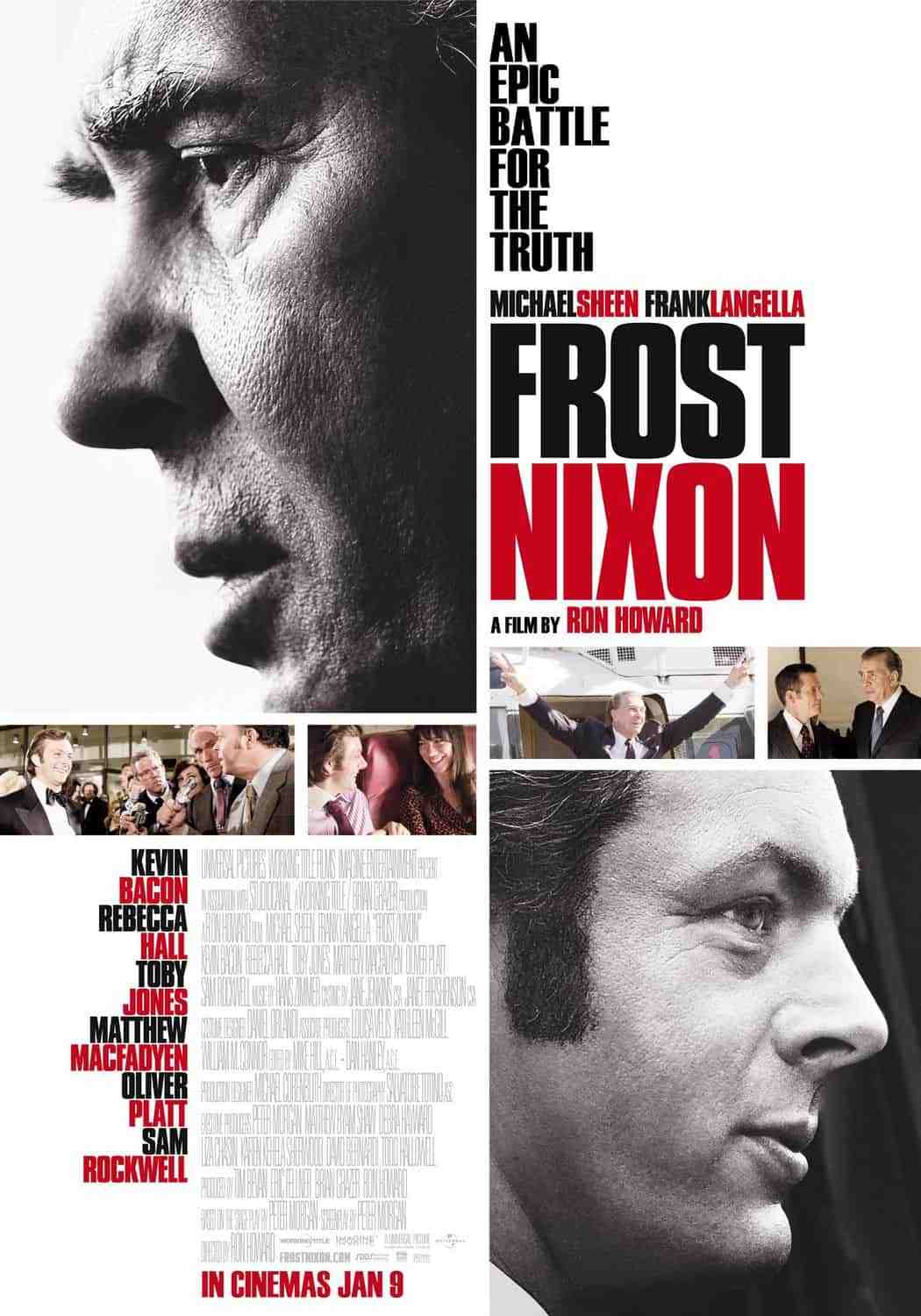