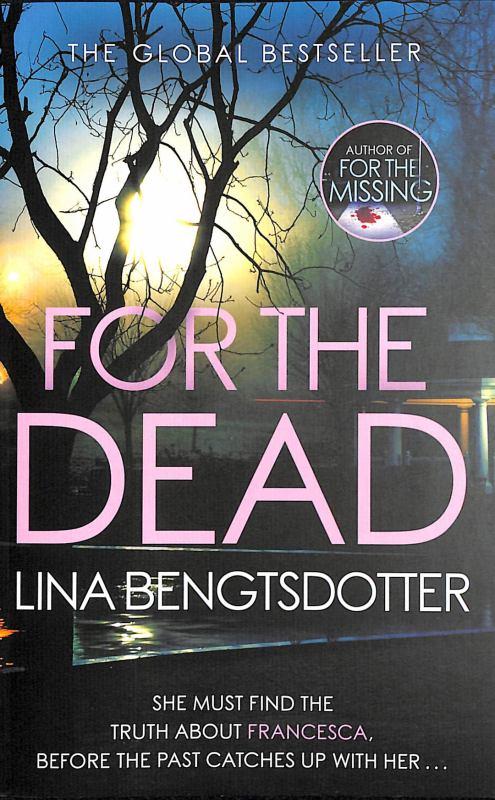 After a thriving debut, Lina Bengtsdotter returns with the second volume in the Charlie Lager series and the final result is an even better novel than the previous one, For the Missing. The Swedish author creates a captivating story featuring a protagonist who bears some of the characteristics that are reminiscent of some of the most fabled main characters in Nordic crime fiction such as Mia Kruger, Harry Hole, and Tuva Moodyson. Charlie has a difficulty in establishing meaningful social relationships, exhibits a tendency towards alcoholism, and she more than often gets so immersed in her cases that she forgets to rest and find some time for herself. For the Dead is set, chronologically, a few months after the events that took place in the previous installment and Charlie is still striving to get over some of the most haunting memories from the case of Annabelle Roos's disappearance in Gullspång, the little town where Charlie used to live as a kid along with her mercurial mother, Betty. Annabelle's case proved to be connected with people that Charlie used to know well and some of the persons involved meant a lot to her. The cost that she had to pay both professionally and personally was immense and the beginning of the book finds her scarred and trying to put her life in order once again. Her boss, Challe, insists that she has to take time some time off in order to come in terms with everything that happened back in her hometown, but Charlie isn't particularly keen to the idea.

Things change for our protagonist when one of her most valued childhood friends, Susanne, tells her that she is getting divorced and asks for Charlie's help to cope with family obligations as she is a mother of four children. Inevitably, Charlie decides to takes a leave from work and returns to Gullspång where Susanne lives in order to comfort her old friend. Her reappearance to the place where she had been brought up triggers a barrage of memories for Charlie who didn't have a particularly happy childhood due to her mother's erratic, unstable behavior that often made her feel embarrassed and stigmatized by the others. While being in Gullspång, Charlie becomes interested in a cold case involving the vanishing of a 16-year-old girl, Francesca Mild, who was gone without a trace more than 25 years earlier. She soon becomes obsessed with finding out what really happened to Francesca even though she is off duty and most of the locals seem to be unwilling to share what they know about the case. Johan, Charlie's journalist friend and old flame, will be on her side and he will help her in her inquiries using his experience as a reporter.

Francesca Mild was a rebellious, untamed teenage girl who was in love with Paul Bergman, one of her classmates in the Adamsberg boarding school. When Paul was found dead, drowned in Gullspång's lake, the authorities ruled his death a suicide, but Francesca never accepted that version of events and claimed that Paul was a victim of a crime, possibly committed by some of her peers in Adamsberg who enjoyed to bully and intimidate him. Unfortunately, nobody seemed to believe her and after a failed suicide attempt, Francesca moves, along with her parents, in a mansion where the family is supposed to rebuild the burnt bridges between them and try to forget the traumatic past. The readers follow the story which is narrated in alternating chapters between Charlie's rogue investigation and Francesca's first-person account of the events and feelings that took hold of her after Paul's untimely death. The pacing is even and the major part of the story unravels through the heavy use of dialogue parts that makes the novel easy to read, while the double timeline narrative is expertly handed by Bengtsdotter who reveals the critical plot points gradually and as the story progresses, Charlie's investigation and Francesca's narration merge into one.

Charlie has, once again, a personal stake in the story as it seems that her mother, Betty, was involved in some obscure way with the Mild family and as the plot evolves the memories from her childhood resurface and perplex her. She is a headstrong character, despite her many weaknesses and vices, and when she takes on a case, she won't rest until she solves it. As her investigation evolves she confronts many of the people that she had interrogated, in an official capacity, a few months back during the Annabelle case. Many of them treat her suspiciously and the largest part of Gullspång's closed-knit community seems not to be particularly inclined to help her find out what happened to a girl who was not a member of their closed club. Charlie will have to use all her cunning in order to overcome the people's reluctance and discern the truth from the lies.

For the Dead is a well-rounded Nordic crime novel featuring a gripping plotline, a lot of characters, and a satisfying conclusion. It will be much appreciated by the fans of Scandinavian crime fiction and especially those who enjoy reading about cold cases being reopened. Even though it's not necessary to have read the first book in the series, it would help you to be acquainted with many of the recurring characters and comprehend the special circumstances and bonds between them. So, I would urge you to read For the Missing first in order to be able to fully grasp even the tiniest detail of the story and sympathize with both the protagonist and some of the secondary characters. I would like to thank Netgalley and the publisher for providing a free ARC of this title in exchange for an honest review.