QUICK REVIEW: Flies on the Wall

Something is rotten in the municipality of Ravnsborg.

Both Danish cinema and television have produced numerous films and shows depicting the cruel power play in the world of politics. The most bright examples are King's Game (2004) and The Shooter (2014) while as far as TV series are concerned Borgen remains at the forefront of the most acclaimed European political dramas. Even the legendary Forbrydelsen's three seasons all featured a heavy political subplot equally fascinating to the main mystery. Flies on the Wall is another addition to this tradition of Danish productions involving the portrayal of the dishonesty and malfeasance in the upper echelons of the country's governmental hierarchy.

The story revolves around My Larsen (Trine Dyrholm), a well-known journalist and documentarist, who is assigned by an ex-boyfriend to shoot a film about the local community of Ravnsborg in south Denmark that will be centered around the controversial figure of mayor Sven Balder (Lars Brygman). Balder is an arriviste and a known womanizer who doesn't hesitate to take advantage of his closest colleagues in order to attend his -dubious- goals. My will soon become enamored with Sven and their relationship will make her work even harder. As she digs deeper into Ravnsborg's secrets, My will realize that something is rotten in the local political scene and she will begin to question her own choices.

The story is simple and the action unfolds partly through the lens of My's camera and partly through the eyes of the director, Åke Sandgren. The performances by both Dyrholm and Brygman are convincing while there are more popular actors completing the cast such as Kurt Ravn, Lars Ranthe, and Ida Dwinger. There is a great opening scene where we learn some basics concerning My's character through the words of her friends and ex-boyfriends. It helps the audience to understand the protagonist better and explains her behavior as the film moves forward. Balder's character is drawn in more somber colors rendering him a rather despicable person and largely unrelatable to the viewers. It's a short film and the tempo in which the plot unravels is rather fast.

Overall, Flies on the Wall is a decent political thriller, even though there are some major flaws mainly having to do with the clichéd plot and the insipid conclusion. Nevertheless, it remains a watchable film that is worthy of your time, especially if you are a fan of this genre. Nordic crime fiction aficionados will also appreciate this 2005 production even if it's definitely not an unforgettable watching experience. There are better choices for those who wish to delve into the murky world of Danish politics and I mentioned some of them in the beginning of my review. My rating would be close to 2,5-3/5 stars. 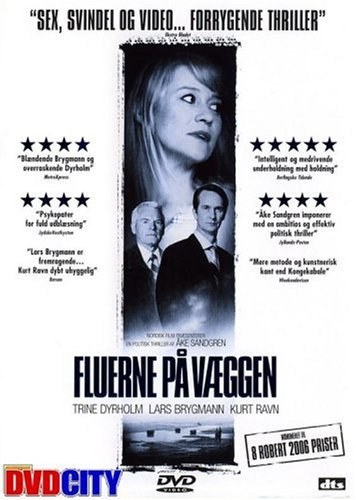 Flies on the Wall