A Japanese family drama wrapped into a murder mystery. 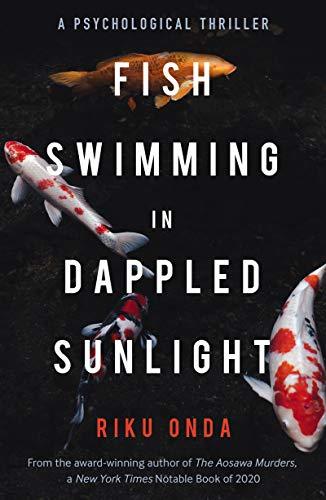 Riku Onda, the pen name of the Japanese fiction author Nanae Kumagai, is a multi-awarded writer whose work has become more and more popular since the first English translation of her novel The Aosawa Murders in 2020. Some of her books have been adapted into feature films and television mini series, further boosting her reputation within the universe of the most celebrated authors originating from the Land of the Rising Sun. Thus, her latest oeuvre which comes under the mystical title Fish Swimming in Dappled Sunlight has been much-reviewed and discussed in the book blogs and websites, with the ratings being more than positive in the vast majority of the readers' assessments. It is an ambitious project, in parts successful and in parts lacking the necessary spark, as Onda attempts to combine a character-oriented story revolving around the complex relationship between the two protagonists, Hiro and Aki, and a straightforward murder mystery which unfolds through the contradicting narrations of the two aforementioned characters. It is a short book, more like a novella, and it is set over the course of one night in which Hiro and Aki contemplate the event that marked their lives and haunts them ever since that happened a year before. The key to the puzzle lies in the special sort of connection between the protagonists which, even though it seems to be apparent in the beginning, Onda soon muddles the waters as the story picks up pace. There are several twists strategically placed in critical turning points of the story and the reader cannot be sure about anything that he reads until the very end.

A year ago, Hiro and Aki, a happy couple (?) visited a mountain and met the local guide, a middle-aged man who died mysteriously after a few days, by falling from a cliff. The strain that his death had put on the two first-person narrators is explained as the reader turns the pages and realizes that the mountain guide wasn't a mere stranger but a person bearing much significance to Hiro and Aki who decide to have a final conversation about the tragic event in the last night that they are going to spend together. From the next day, each one will go his own way and the author highlights in the first pages the fact that they are not going to meet ever again. Sitting in a naked apartment, stripped from furniture and using a suitcase as a table, Hiro and Aki will divulge their respective perspectives on the events that preceded the guide's death and their accounts will significantly differ and even straight contradict one another, leaving the reader to decide which narrative is more plausible. As the story moves forward, it becomes obvious that there is a double mystery lying at the heart of the novel: the first concerns the actual death (murder?) of the mountain guide and the second, and perhaps even more important, bears on the nature of the relationship between Hiro and Aki. As the story reaches its climax, the author conjures her tricks and employs the use of red herrings and distractions to throw the reader off-balance thus making the finale even more startling.

The fact that both Hiro and Aki speak in the first person deems the characters easier identifiable to the reader while quickening the pacing and accentuating the mystery element as the reader is inevitably trapped inside the minds of the two narrators. There is no objective intervention from an omniscient author who would attribute some kind of validity to the descriptions of the characters, and that is a bold deed carried out by Onda. Most authors are afraid of using first-person narration as it is harder to control and demands another level of concentration by the writer who becomes the character, not merely describes one. The fragmented character of the narration is another direct consequence of that choice and the reader gets the feeling that he is fed pieces of the puzzle in each chapter which initially seem unconnected and even irrelevant to the main storyline. Nevertheless, every word in the text has its own place in the overall narrative and the author delivers a masterclass in avoiding redundancy, a sin committed by many of his peers in the fiction writing scene.

Onda wants to convey some interesting remarks regarding the essence of love, the desperation that comes from keeping alive a doomed relationship, the complex machinations of time and memory, and many other issues that are communicated through the observations made by Hiro and Aki as the night gives away to dawn, marking the end of the protagonists' interaction and the finale of the story. However, despite the gravity of some of the themes explored, many of the characters' lines feel like half-baked philosophies, lacking any proper depth as the author fails to grasp the quintessence of the subjects at hand. Many of the quotes revolving around the aforementioned topics are of superficial character and fail to both emotionally engage the reader and prompt him to think further on them. I can't say that it was a philosophically sound novel, despite its grand intentions, and since it is the first Riku Onda's book that I've read, I would like to read some more of hers to determine whether this was a flaw concerning this particular work or it is a trademark of the author in general. The purely mystery aspect regarding the death of the guide finds its solution in the very final pages and the denouement finds Hiro and Aki on the trail of a new life, free of the deceptions that cost them so much so far. There is a kind of bittersweet finale that fits the story well and redeems the novel's flaws as I cited above.

To conclude, I found Fish Swimming in Dappled Sunlight to be a rather stimulating read that could be so much more if only the author was more careful when dealing with complicated subjects that demand clarity and lucidity in writing. It is a fast read that one can complete in just one sitting and guarantees entertainment as the two matching mysteries are appealing enough to keep the reader invested on the story. Unfortunately, I cannot give a higher rating due to the deficiencies that I've mentioned in the previous paragraph, thus my final determination is 3/5 stars. Perhaps I did read a lot around the web before starting reading the novel and my expectations were higher, but I was anticipating a more mentally challenging reading experience. Finally, let's not forget to mention another plus for the book as it is set in the exotic Japanese landscape, a scenery unknown to the vast majority of the westerners. Japanese crime fiction is a solid choice for the fans of the genre and along with Riku Onda, you should check also some other names such as Rampo Edogawa, Keigo Higashino. and Natsuo Kirino. I shall search for The Aosawa Murders as I believe that Onda deserves a second chance.