The best season so far!

Netflix's crown jewel of gangster shows, Undercover is back for its third and best season so far and once again the audience dives into the murky world of police infiltrators and drug barons. In the first cycle we got acquainted with Bob Lemmens, an undercover police officer whose mission was to penetrate the closed group of drug traffickers led by the ecstasy kingpin, Ferry Bouman. Ferry, who gets arrested and incarcerated in the end of season 1, returns in this latest installment as a protagonist and his extravagant presence is a reason of its own to watch the show. Frank Lammers delivers an excellent portrayal of the druglord who is used to get what he wants by means of intimidation and the performance by Lammers is more than convincing. In season 3, Ferry and Bob, two arch-enemies, team up in order to infiltrate a branch of Turkish mafia in Belgium that distributes vast quantities of ecstasy to the market. The relationship between the two men is more than strained and each one has his own reasons to accept the mission as becomes evident during the evolution of the tight woven plot. Their interactions are often hilarious and the dialogue is top-notch, one of the best that I've encountered in the genre's television productions.

In the first episode, we watch as Ferry gets released from prison after 5 years of incarceration. Very soon, he realizes that he should return to his old ways if he wants to make a decent living as the jobs recommended by his parole officer are no match for him. A lot of things have changed during the years that Ferry was away and his glory days as the top in the ecstasy trade are over. Now a Turk, Serkan, leads the game and his gang is well-connected and omnipotent. Ferry will struggle to regain his old professional liaisons, but his first attempts lead to a brick wall as Serkan seems to have bought off all of Ferry's past acquaintances, the people who could help him get back in the game. Ferry will accept to cooperate with a rogue group of police officers who, under no official capacity, decide to infiltrate Serkan's gang in order to bring it down.

Bob has retired from the police force and he spends his time doing the odd job in order to earn his living. When he is approached by his ex-boss who wants to convince him to return to his days as an infiltrator, his first reaction is negative. Nevertheless, the fact that an undercover agent has been murdered by a member of the Turkish mafia makes him think twice and he finally accepts the challenge even if the task seems to be unachievable at first sight. Bob's assignment is to find the person inside the police who leaks confidential information to the members of Serkan's group. Bob is the one who contacts Ferry and offers him a deal that could be beneficial for both of them. Bob will uncover the leak that is responsible for the murder of his colleague and Ferry will get rid of a strong competitor in his line of business.

The first meeting between Bob and Ferry ends up in a massive fight as the Dutch kingpin considers Bob the reason that he lost his freedom, his business, and his wife, Danielle. However, his dire financial situation makes him think Bob's offer and after careful consideration agrees to join forces with his despised enemy. Ferry knows Serkan from the old days, when the Turkish gangster was just a minor player in the field in which Ferry was the absolute king. This change in power dynamics chafes Ferry who has to submit himself to a man that used to be nothing more than an ant when Ferry was the major producer of Ecstasy in the whole Belgium. Bob keeps an eye on Ferry and he is always there to prevent him from doing vile things that will have severe repercussions for their mission. Trust is an unknown word for the two protagonists who like to keep their inner thoughts to themselves, even when the circumstances are critical and exigent.

Suspense is the key element that makes Undercover a binge-worthy show and viewers who are familiar with the two previous seasons are certainly aware of the masterful way in which the screenwriters amplify the uncertainty and agony of the audience through putting the protagonist(s) in impossible situations that seem to be fateful for them only to be saved by the brilliant intellect of Bob or the cunning of Ferry. The depiction of the gangster lifestyle is neither overcritical nor glorifying and the majority of the secondary characters are portrayed as plausible human beings with a knack for money and power. Serkan and his wife, Layla, are significant antagonists and their roles are constructed on the basis of verisimilitude. They are not cardboard, one-dimensional characters that we often come across in similar shows and this is another reason why Undercover shines brighter than its competitors.

The performances by all the actors are excellent and Elise Schaap, who plays Ferry's ex-wife Danielle, is worthy of a special mention as in her limited screen time manages to create a fascinating character, a woman who has decided to cut ties with her shady past and start anew. Tom Waes is portraying Bob with a cool determination and offers his character an air of authenticity and respectability. Apart from being an undercover agent, Bob is also a family man and we get glimpses of his everyday life at home along with his wife and kids. His responsibilities as a professional often clash with his duties as a husband and father while in this season his wife is ready to give birth to his third child. The toll that his job takes on him is keenly illustrated in Waes's face as he struggles to balance his professional and personal life.

I found the third season of Undercover to be superior to the previous two as the story is gripping and the fact that Ferry and Bob are working together deems this cycle a must-watch. The viewers who are not familiar with the characters and setting will have no problem relishing the brilliant plot and first-class dialogue. I am sure that after finishing watching this latest season, you will go back and check out seasons 1 and 2 as the viewing experience is majestic. There are suspenseful moments, crazy twists, and solid mystery embedded in the story which will keep you on the edge of your seat throughout the season's eight episodes. Fans of gangster shows and productions that focus on the slippery work of infiltrators will be extremely satisfied. 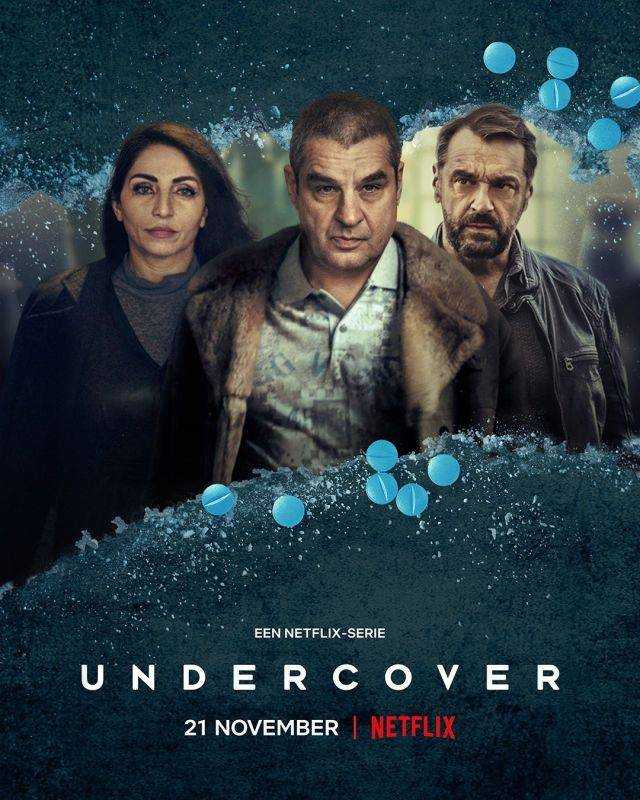