This is a review based on the first two episodes of the six-part TV series The Head, an international co-production, set in the Antarctica and featuring a multi-national cast with actors from Spain, England, and Denmark. In many ways, the show is reminiscent of another Nordic production, Rig 45, a cozy murder mystery taking place at a secluded oil platform where a string of heinous killings forces the crew members to turn against each other as sooner or later everyone becomes a suspect. The Head adopts a similar, Agatha-Christie-like plot which unfolds through a dual timeline and counts on the whodunit element which is ever-present throughout the duration of the first two chapters. There is an abundance of suspects and each of them might have a credible motive for committing these atrocious acts as Antarctica is a place where everyone lies and pretends to be someone that he really isn't. Thus, nothing and no one is what it seems and the audience's suspicion can be equally cast on everyone. There is a clear reference to Agatha Christie's infamous masterpiece, Ten Little Indians, a novel which is also set in an isolated mansion where communication with the outside world is impossible and the characters are getting killed in a ghastly manner. The South pole provides the most fitting setting for a murder mystery to unfold and the freezing temperatures and harsh landscape furnish the story even further.

The Head is the story of a research group working at the Polaris VI Antarctic Research Station, conducting scientific experiments as a part of a larger fight against climate change. In the beginning of the first episode, the audience watches the members of the crew celebrating the end of the summer period and preparing themselves for the long, freezing winter nights that will follow. The majority of the staff abandons the station in order to return to their homes, but a small group of people remain to the site to continue their groundbreaking research. After six months, when the winter ends, Johan Berg (Alexander Willaume) returns to the station only to make a grisly discovery: seven members of the winter crew are found murdered, while two of them are missing. The only survivor seems to be the doctor, Maggie (Katharine O'Donnelly), who is found hidden in a cupboard with a knife in her hands and the subsequent examination suggests that she had suffered a nervous breakdown as well as a memory blackout. Johan's wife, Annika (Laura Bach), is one of the missing and he is determined to do everything in his power to find out her whereabouts even if that means putting more pressure on Maggie.

The story is narrated in two timelines, the present and the past through flashbacks. In the present, we follow Johan's personal investigation in the multiple murders and the interrogations that he conducts as he is struggling to establish what had happened at the station since he left. Johan must discern the truth from the lies of the surviving crew members in order to have a chance in finding his beloved wife alive. Maggie's version of the truth is far from being convincing as she seems to have her own secrets and the reappearance of one of the missing persons, Arthur (John Lynch), perplexes Johan and his team even further. In the flashback scenes we witness the methodical and premeditated obliteration of the crew members as they are getting killed one-by-one by a cunning perpetrator who always seems to be one step ahead of everyone else. Soon, a morbid atmosphere settles at the station as nobody can be trusted and everyone has skeletons in their closet. Will Johan be able to work out who is the person responsible of these dreadful murders or is the villain well and truly gone?

The show features many acclaimed thespians from various countries and apart from Alexander Willaume (Equinox, Countdown Copenhagen) and John Lynch (The Fall, Shetland), there is also Álvaro Morte (Money Heist, Mirage, The Pier), Laura Bach (Those Who Kill, Rita, Gangs of London), Andreas Rothlin Svensson (Before We Die, Sthlm Requiem), and Sandra Andreis (The Girl With the Dragon Tattoo, Box 21). All performances so far are convincing and the cinematography is beautiful and wild at the same time as the viewer is transferred to a hostile environment where the extreme weather conditions prove that nature doesn't really care whether humans live or die. The first two episodes were compelling enough to convince me to binge-watch the remaining four episodes today. The Head is a television production which is recommended for fans of classical cozy mysteries of the Golden Age of Detective fiction and all those who enjoy closed-room whodunits set in remote locations. 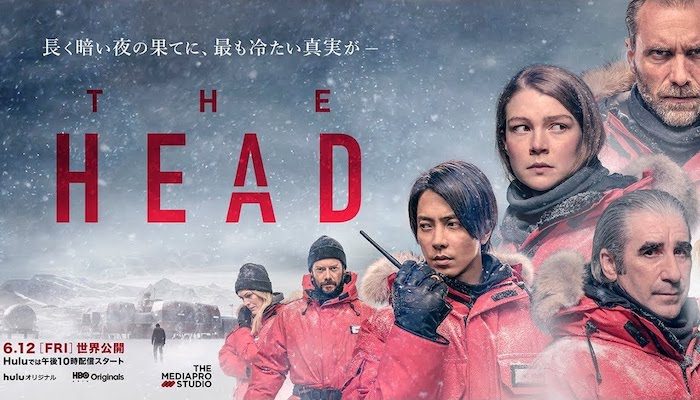