An average reboot of a classic show.

The world's most beloved serial-killer returns in this reboot of Showtime's classic show, Dexter. The vast majority of its fans felt justifiably frustrated, even betrayed, by the ending of the eighth and final season in which Dexter loses his sister Deb and decides to commit suicide only to be saved at the last minute in a way that remains inexplicable to the audience. The last scene showed Dex working as a lumberjack in the countryside and the fallout of this decision made by the creators of the show has been massive as the Dexter aficionados found this finale to be cheap, lazy, and even deceitful. Nevertheless, the news of the upcoming production of a spin-off series under the title Dexter: New Blood attracted the audience's attention and there were several heated discussion around the web regarding the possible setting and mood of this new venture.

The story is set ten years after the devastating events of the show's eighth season and we find Dexter living in a little town north of New York city, Iron Lake. He now goes by his new alias, Jim Lindsay, the producers' discreet way of paying homage to the author of the Dexter novels, Jeff Lindsay. Dexter is settled to his new place of residence and he has gained a good reputation among the town folk. He works in a gun shop and has a girlfriend, the local chief of the police, Angela. He seems to be relatively happy until his son, Harrison, turns up and tells him that he knows who he really is. Dexter had abandoned his son when he decided that he should drive into the eye of the hurricane Laura, and he hasn't seen him for the last decade. Harrison is now a teenager who seems to have inherited some of his father's dark inclinations and compulsions.

The most important thing to know though is that Dexter hasn't killed anyone for the better part of the last few years and he struggles to follow a routine that makes him feel and act normal. Debra, his sister and soulmate, appears as a ghost in critical times substituting Dex's father, Harry, who was the protagonist's imaginary friend in the original. Nevertheless, while Harry always acted as the voice that helped his stepson maintain his balance and sense, Debra almost hysterically reminds Dexter of the sad fact that everybody around him are doomed to die because of his obsession with killing. I find Debra's character to be slightly irritating and it's just as well that her interventions are kept at a limited level. Don't get me wrong, I loved Jennifer Carpenter's portrayal of the tough-as-nails detective Debra Morgan in the prequel, but this time her character adds nothing essential to the story.

The new show's first episode signifies Dexter's return to murder after all that time. At the same time he receives Harrison's visit and wonders if he should let him stay with him or not. His love for his offspring prevails and he decides to live with him in Iron Lake. Dexter's relationship with his son is one of the main themes of the season, especially as the audience soon realizes that Harrison is a young man filled with secrets and that he has perhaps inherited his father's dark passenger. Dexter is at a loss, not knowing how to treat his teenage son and he contemplates revealing to him the whole truth about him. Furthermore, there is Dexter's relationship with Angela, a determined police officer who understands that something is amiss with her boyfriend, something that she cannot put her finger on until she bumps into Angel Batista, Dexter's ex-colleague who visits a nearby town for a police conference.

So far, Batista is the only character from the original who reappears in this production and it would be nice if he had a larger role to play. Dexter: New Blood is a different show from its prequel both in terms of narrative structure and overall tone and this is not just because the action is transferred from the Miami sunshine to the frosty upstate New York. It is clear that the creators aspired to invigorate the series and the result is satisfying, though there are some defects that blemish the overall picture. The show doesn't have an intriguing enough main plotline and divides its focus between several sub-plots that seem to be loosely connected. The lack of a central narrative vehicle weakens the show's coherence and the audience is often left wondering what exactly is the point of this season. Is it about Dexter and Harrison? Or about the murder that Dexter commits in the first episode and its consequences? Is Angela a key player in the story or not?

All the above questions may perhaps be answered in the course of the season's ten episodes, but as I'm already watching the eighth one, I am not convinced that we will get satisfactory responses to our queries. Michael C. Hall delivers a marginally altered portrayal of Dexter who is not quite the character that we learned to love through his adventures in the original's seasons. Jack Alcott is convincing as Harrison who is bold and fearless, nevertheless he also has a more fragile side that becomes apparent in the later episodes. The other actors do a decent job and Clancy Brown's performance as the local bigshot, Kurt Caldwell, is worthy of a special mention. Clyde Phillips is once again the creator and the man responsible for the many changes featured in Dexter: New Blood. Fans of the original should definitely give it a try while those who are not familiar with the characters' origins will have a hard time appreciating the nuances between the two productions. I will most probably edit this review when I watch the final episode so keep your eyes open. 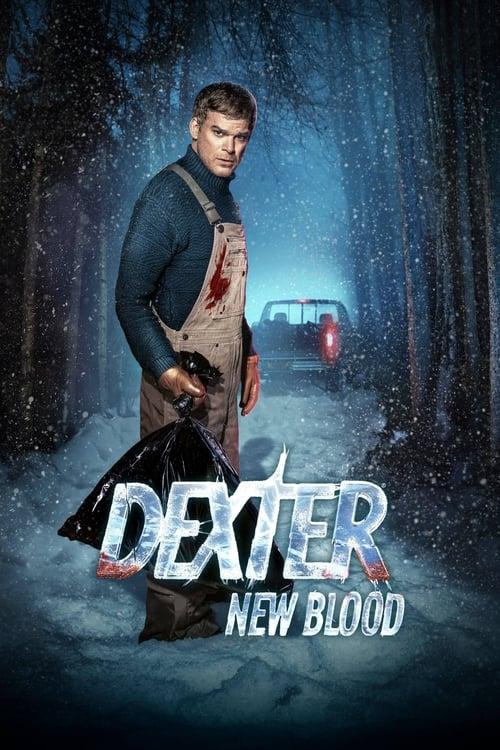