"And for what? For a little bit of money".

A milestone achievement in the modern neo-noir phenomenon, Fargo is a true classic and the most celebrated film written and directed by the Coen brothers. Joel and Ethan Coen began their career with the gloomy Blood Simple, a cynical story featuring largely immoral characters set in a small, seedy Texas town where moral virtue is a concept unknown to its inhabitants. Greed, sexual jealousy, and every kind of human pathos constitute the motives of the protagonists in the fictitious, though sometimes eerily resembling reality, universe created by the Coen brothers. Being the pioneers of the neo-noir genre, the two brothers have adopted some major staples of the classic noir such as "stark contrasts between light and shadow and oblique camera angles meant to disorient the viewer, as well as particular themes such as alienation, pessimism, and moral ambiguity" ("The Philosophy of the Coen Brothers"). Fargo signifies the revival of the classic noir tale as it embraces the notions of existential hopelessness and nihilism and uses them to enhance the somber mood that pervades the film and becomes its number one trademark that pays homage to its filmic predecessors of the 1940s and 1950s.

The movie is set in the states of Minnesota and North Dakota, a colorless backdrop for the grim story of greed and desperation to unfold. In the savvy collection of sixteen essays on the links between philosophy and the Coen brothers' movies, The Philosophy of the Coen Brothers, edited by Mark T. Conrad, there is a highly mind challenging entry by Jerold J. Abrams, titled: "A Homespun Murder Story": Film Noir and the Problem of Modernity in Fargo". In his article, Abrams argues that in Fargo one encounters all the cultural products of the modern civilization that diminish the subject and lead social life to fragmentation, individuation, and isolation. He writes that the movie "uniquely reveals the existential isolation of the human condition within modernity" ("The Philosophy of the Coen Brothers"). However, the film also incorporates a postmodern dimension which is manifested in the broken relationships between the characters and the impossibility of essential human communication within the story's confines. Plus, he mentions that the choice of a premodern setting such as the bleak Bridesmaid, Minnesota, further embellishes the feeling of the interaction breakdown between the characters. The small town in which Fargo takes place is a completely unremarkable corner in the American countryside where numb whiteness dominates the scenery: "What dominates the screen instead is a total whiteout, blankness everywhere, with virtually no human effect whatsoever" ("The Philosophy of the Coen Brothers").

This background, "a sort of nowhere", becomes the empty canvas upon which the, largely detestable, protagonists will draw a picture through their decisions and subsequent actions that lead, as it happens always when the motives are not aligned with some form of rational reasoning, to multiple tragedies and several dead bodies. Jerry, the man who sets off the story by assigning two seasoned thugs with the task of kidnapping his own wife in order for him to be able to collect the hefty ransom demanded, is a meek car salesman, portrayed brilliantly by William H. Macy, who finds himself in a tough spot and desperately needs money. His voracious appetite for more makes him demand a much larger sum than the one that he needs to pay his debts, thus his character is immediately presenting himself as morally incontinent. The same holds true for the two criminals who are going to abduct Jerry's wife, Jean (Kristin Rudrüd), Carl (Steve Buscemi) and Gaear (Peter Stormare). Gaear is the epitome of a sociopath, a man for whom nothing matters except for money and satisfying his primal needs, either by engaging with sex with prostitutes or quenching his hunger with pancakes.

Gaear is silent throughout the movie and there are many times in which Carl, irked by his morose attitude, criticize his aversion to words, despite of them spending so much time together. In fact, even if Carl and Gaear are partners in crime and earn their living together, they actually don't know a thing about each other and the reason is that they simply don't care as they are encapsulated in their own individual, solipsistic sphere that allows no external influences from the outside world. But Carl and Gaear are not the only two who fail in communicating in Fargo. Jerry is also having trouble in his interactions with the others, largely because he tends to see the others as instruments, pawns which he can manipulate in order to reach his goals. His relationship with his wife, Jean, is depicted as purely superficial while his son, Scotty, doesn't seem to hold a high place in his list of priorities. Even when Jean is kidnapped, Jerry is struggling to reach out to his only son, but he fails as he can't be open and sincere with him. He is drowned in his own secrets and his fate is sealed even from the first minutes of the film's runtime, when he meets Carl and Gaear to discuss the specifics of the kidnapping.

All the above characters don't have the capacity for shame, a fundamental value of every decent human being. In order to be able to feel shame, it is necessary to recognize the others as morally significant. It is their contingent condemnation of our actions that we fear and the state of disgrace that follows an ignominious deed from our part. Jerry, Carl, and Gaear are simply oblivious of the meaning of moral agency and their capacity for shame is non-existent as their cynical and self-absorbed perception of the world doesn't acknowledge the others as people whose judgement may have a serious impact on their state of mind. In fact, there are some times that Jerry exhibits some faint signs of moral consciousness, but they are always brief and they last no more than a few seconds. There are some more despicable characters on screen such as Jean's father, Wade (Harve Presnell), a wealthy businessman who treats Jerry with indignation and trusts no one but himself to do whatever needs to be done. This trait will prove to be his pitfall in the movie's finale which is soaked in blood and graphic violence.

Nevertheless, there is a redeeming character in Fargo and that is none else than the local detective Marge Gunderson (Frances McDormand), a straight-as-an-arrow law enforcement agent who is initially called to investigate the murders of a police officer and a young couple committed by Gaear, and begins her inquiries which will soon lead to Jerry and his schemes. Marge seems to be the only virtuous human being in the frozen American town and the writers make that clear by injecting some short snippets illustrating fragments of her family life and her harmonious relationship with her husband. Thus, Marge is set apart from the other characters as she is capable of feeling human emotions and there are many instances in the movie where she makes a point with her behavior, forcing the other party to feel uncomfortable with their own petty behavior. Furthermore, Marge has an inclination to reflect on the crimes and the motive that lurks behind them, as is evident in the last scene in which she has arrested Gaear and sat him on the back of the police car. Marge reminds Gaear of his abominable murders of five human beings and ponders: "And for what? For a little bit of money". This short phrase summarizes the motivational engine of the rest of the characters in the story and renders her some sort of detached narrator who sees the plot unfolding miles away.

There are few other films that stick to your memory like Fargo does. It possesses all the merits of a prototypal noir story, but staged in the contemporary era, with all its contradictions and inconsistencies, and in a bleak setting that proved to be an ideal terrain for the artistic purposes of the writers and directors. Along with No Country for Old Men and Blood Simple, Fargo definitely belongs in the triad of the most compelling neo-noirs shot in the last decades and its influence on the later productions of the genre has been immense. It's an intense viewing experience, sometimes alluring, sometimes repulsive, that becomes even more appreciated in retrospect, when one begins to reconsider and analyze its main aspects. I would urge you to read The Philosophy of the Coen Brothers as a useful companion to the Coens' oeuvre where you can find several essays exploring all their major films and connecting them to philosophy and the works of Nietzsche, Rawls, Aristotle, Kierkegaard, and many others. Keep in mind that the movie won two Oscar Awards for Best Actress in a Leading Role (Frances McDormand) and for Best Writing, Screenplay Written Directly for the Screen (Joel and Ethan Coen). I always have time for a re-watch of Fargo and each time I detect something new that alters my overall evaluation of the movie. Try it yourselves. 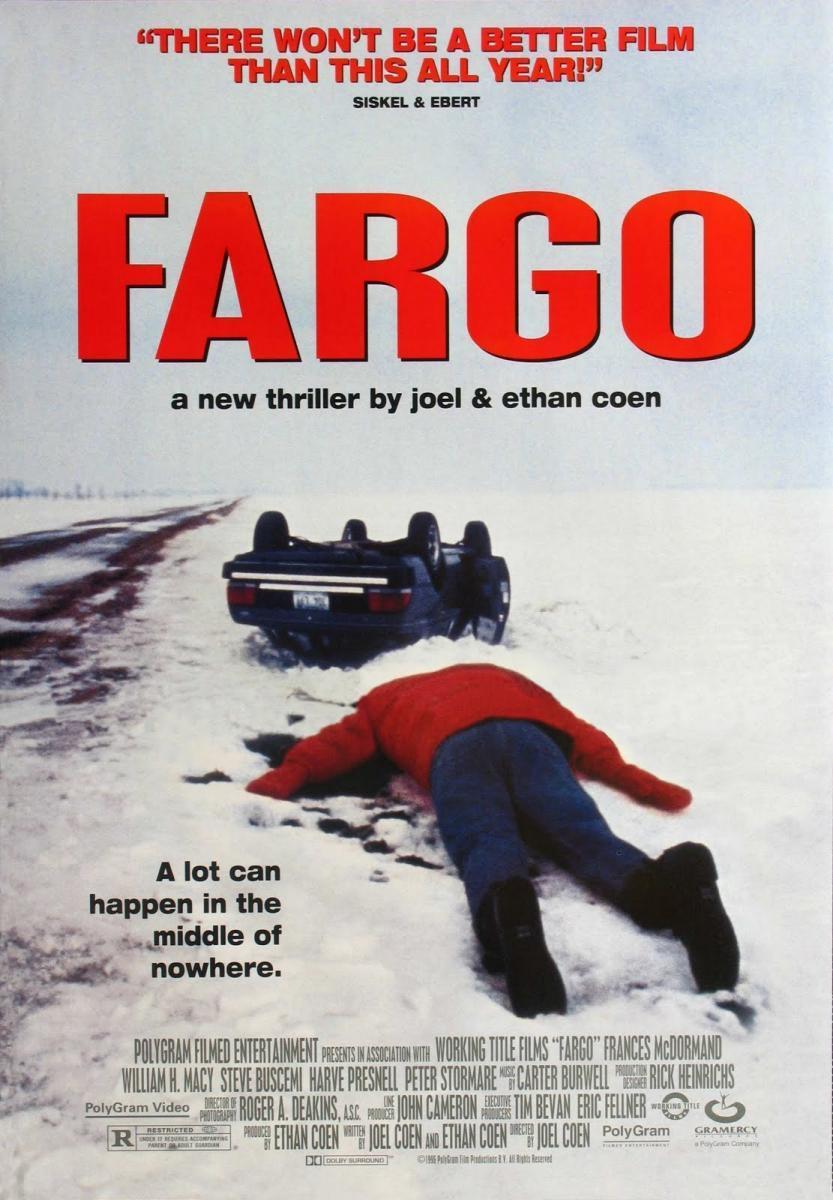