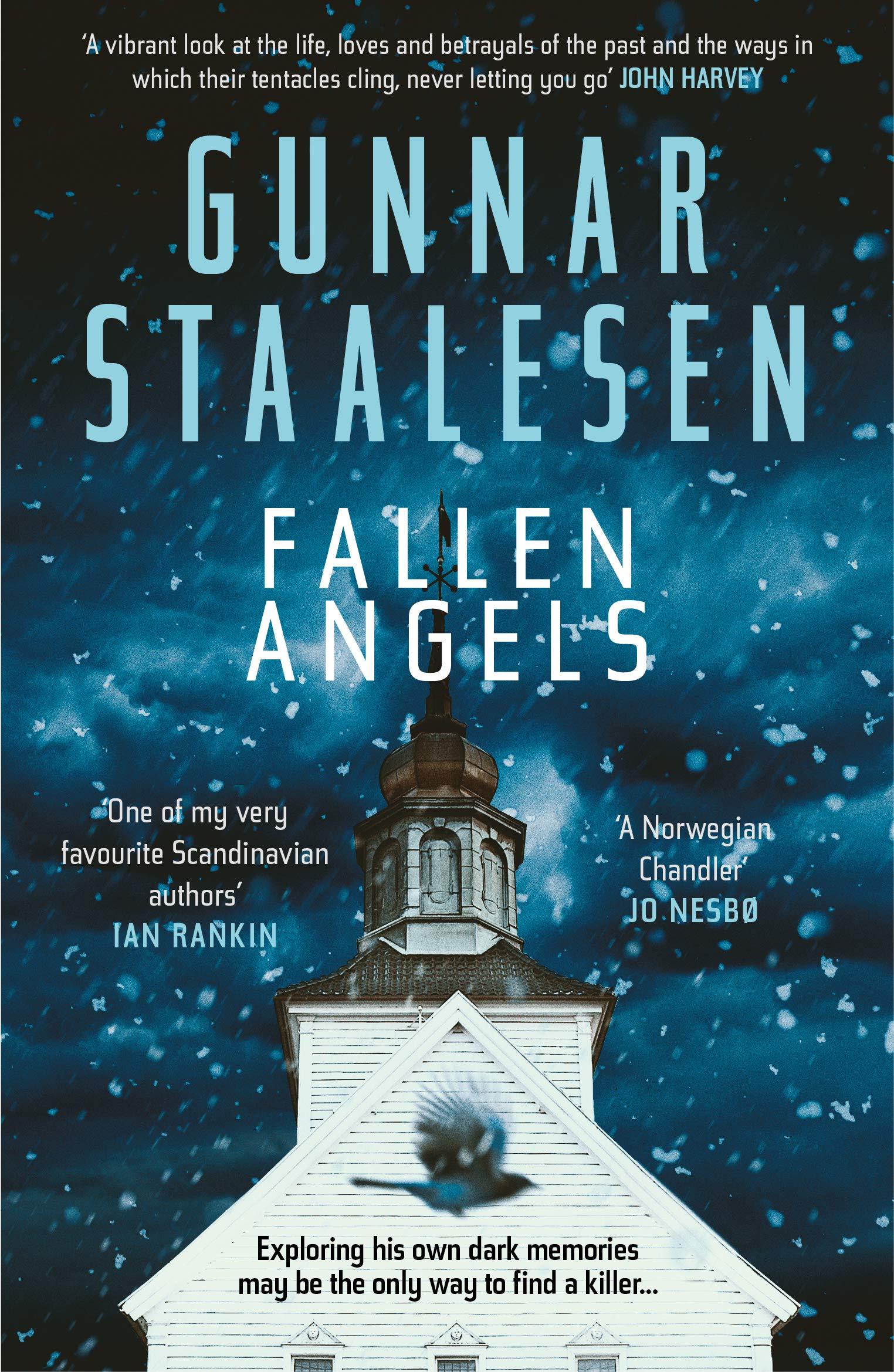 It's always quite something to read a novel written by the "godfather of Nordic Noir", or as many prefer to call him "Norwegian Chandler", Gunnar Staalesen. Varg Veum is one of the oldest and most intriguing protagonists in the genre and there are, so far, more than twenty books featuring the rogue private eye, son of a tram conductor who enjoyed studying Norse mythology, who used to work in Child Welfare as a social worker. The first installment in the series was published in 1977 and from then on the global readership has been given the opportunity to delve into the fascinating world created by Staalesen's wonderful prose which stands out due to its accuracy and simplicity, the excellent descriptive parts, and the stark characterization. It should be noted that a bronze statue of Varg Veum adorns the entrance of the Scandic Strand Hotel near Bergen's harbour. Fallen Angels is the eighth installment of the beloved saga, first published in 1989, and it won the prestigious Palle Rosenkratz Prize, awarded to the best crime novel published in Denmark in a given year, in 1990. The story triggers a trip down memory lane for Varg who has to deal with a case involving his childhood past, searching for the woman who used to be his first crush and struggling to solve the murder of an old acquaintance against all odds as he soon realizes that there is nobody who can be truly trusted.

It all begins when Varg attends the funeral of an old classmate and there he meets again, after many years, some of his friends from his school years. Jakob Aasen used to be one of Varg's closest friends as they were growing up together in one of Bergen's neighborhoods. Together they go on a pub crawl and they end up in a club where Johnny Solheim is performing as a singer. Jakob and Johnny used to play together in a band called "The Harpers" and their relationship seems initially to be strained as there is certainly a shared history which Varg ignores. Jakob's wife, Rebecca, is a woman whom Varg has never seen since he was a young lad when he felt the first touch of love and flirted with her. Rebecca has left Jakob alone with three children and now she is missing so he asks Varg to make some discreet inquiries concerning her current whereabouts. Varg accepts to do it as a favor to an old friend and when, the day after, Johnny is found dead, stabbed to death, outside of an illegal nightclub, the Bergensian private investigator will be drawn into a spiral of past secrets and lies that resulted in the death of Johnny.

The story is gripping and it unravels in an even tempo, becoming quicker towards the surprising end where the truth is revealed and all pieces of the puzzle fall into place. The reader has the opportunity to get a glimpse into the protagonist's past life as a young child and his nostalgia is evident in his first-person narration: " A lot was gone, but the footprints of the children who had run around there would never be entirely erased until they themselves were, all of them, from the sketch-pad of time". Staalesen's depiction of how it was like to live in the post-war Bergen is marvellous and the novel's supreme sense of location deems Bergen a town to be visited promptly. After finishing the book, I had the sense that I was familiar with Bergen as it is so brilliantly outlined on the page that the reader feels like he has already visited the place. Varg's memories are relayed in a lively manner and his narration of the relationship between him and Rebecca as an adolescent is sprinkled with many melancholic remarks on an epoch long lost that is gone forever.

Furthermore there is some splendid dialogue and lots of musical references, especially regarding the beginnings of rock music and bands like The Beatles. Varg ponders: "We ere the fifties schizophrenic spawn, growing up in a vacuum, no ideology, no God... all we had was music". There is a thorough analysis made by Jakob concerning the evolution of The Beatles lyrics throughout their active years in a conversation he has with Varg. It is one more proof that the reader has much to gain by reading a Staalesen's novel who enjoys to enrich his writing by inserting a wide variety of cultural and historical elements. Keep in mind that the story is set, chronologically, in 1986, a bygone era animated by the Norwegian author's pen. Of course, Fallen Angels is first and foremost a crime novel featuring an ingenious plot and the final result is more than satisfying. There is a lot of mystery and it is really hard to predict the finale of the story. It is highly unfortunate that there aren't more Varg Veum novels published in English and I can only hope that we will have the chance to read more translations soon.

For the many Varg Veum fans around the world, it ought to be stressed that there is a proper TV adaptation of some of Staalesen's stories. There are 11 TV-movies of 90 minutes each, featuring Trond Espen Seim as Varg and Bjørn Floberg as Inspector Hamre. The majority of them are high-value productions that, nevertheless, often experiment with their plotlines and drift away from the novels' spirit. The same happens with Fallen Angels (original title: Falne Engler), first aired on 2008, that features a completely different storyline, even though it retains some of the book's main characters. The show can become an introduction to Staalesen's fictional universe and the fact that it was shot in Bergen adds up to the viewing experience. Nevertheless, those who have a knack for crime novels with a strong literary aspect should directly purchase one of the books in order to fully appreciate the author's skills and wisdom.