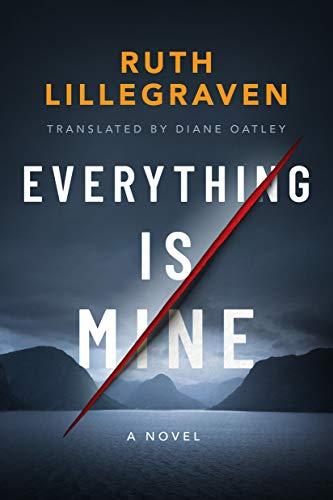 With Everything is Mine Ruth Lillegraven makes a strong entry into the pantheon of Norwegian crime fiction as her novel is a riveting combination of domestic and psychological thriller narrated through multiple perspectives and timelines. Lillegraven introduces to the readership a new heroine, Clara Lofthus, a character influenced by the stark female protagonists of Nordic crime fiction whose complexity and inner struggles made them a trademark of the genre. However, Clara is not a police officer or a freaky hacker but an achieved professional who works for the ministry of Justice and we are witnessing the development of her career as the story moves forward and she climbs the ranks within her highly antagonistic working environment. Clara is a highly skilled individual who knows how to get what she wants both on a professional and a personal level. Her marriage with Henrik, which constitutes one of the core themes of the book, is far from being ideal and her family life is tainted by secrets and lies from both sides.

In her debut in crime fiction, Lillegraven explores a motif that is overused in Scandinavian crime fiction, the physical and psychological abuse of minors by their parents. When I grasped the full context of the story, I admit that I felt underwhelmed as I expected more of the same old cliched plotlines filled with horrible descriptions of child torture and exploitation. Nevertheless, the author proved me false as she has weaved an engaging storyline in which the child abuse is only the necessary background for the protagonist to be meticulously scrutinized and revealed to the reader in all her might. Clara's familial history is marked with neglect by her mentally unstable mother, Agnes, and she has a soft spot for the children who silently suffer in their homes all over the country. As the plot unfolds, we can see the lengths that she is willing to go in order to protect the innocent creatures from their despicable parents.

The novel begins with a scene from the far past in which Clara and her stepdad are involved in a mysterious car accident that nearly cost her life. Despite her attempts to save him, the stepdad drowns and Clara is interrogated by a friendly police officer who tries to clarify the circumstances of the calamity. Then we cut to present day and we are introduced to Clara and Henrik's family. Henrik is a doctor in the prestigious Ullevaal hospital in central Oslo while Clara is working as civil staff in the ministry of justice. One morning, an immigrant thug enters the pediatric ward holding his 4-year-old son who has suffered cerebral hemorrhage. As Henrik examines the boy more closely, he spots some marks and bruises that are consistent with regular beatings. Unable to save the little child, Henrik is brimming with feelings of resentment against the Pakistani father and swears that he will do something meaningful in order to expose the extent of child abuse in Norway. But when the father, who is proved to be a well-known gangster from the eastern neighborhoods of Oslo, is found murdered in the hospital, executed with two bullets by a Glock, Henrik and his colleagues will become the prime suspects.

Clara is also struggling to tackle the same burning problem but from another bulwark, that of politics and legislation. During the past few months, she has been feverishly working on the drafting of a new bill that aims to raise awareness of the phenomenon and make it easier to denounce that kind of behavior as soon as it becomes apparent that a child bears injuries that cannot be sufficiently explained. Clara is shocked when the minister of Justice announces her that she will have to put the bill on ice due to the reaction of the other political parties and all the work that she put through is going to garbage. Desperate to re-introduce the bill to the people who matter, she accepts a new job as a state secretary, a purely political role that will perhaps give her the chance to re-address the issue in another, more appropriate, time. The murder in Henrik's hospital is followed by another one in the place where he resides with his colleagues, attending a conference and the police investigators seem to think that someone is taking out parents who are known to abuse their own children. The killing spree has an effect on Clara's job while Henrik will have to face harsh questioning by the authorities concerning his involvement in the two murders.

There is a grand twist that takes place in the two thirds of the book and forces the reader to re-read the story under a whole new light. I found it to be well-placed and effective, turning the plot upside down and adding to the overall engagement with the novel. Clara's character is diverse and multi-dimensional, deeming her one of of the most particular protagonists in the genre. Her narrative voice is strengthened toward the finale and becomes more prominent as details from her traumatic past are disclosed and the reader obtains a better understanding of her motives. Apart from Henrik and Clara, there is also a third narrator, Clara's father, Leif, who recounts his personal history transporting the reader several decades back in time to witness his precarious relationship with his wife, Agnes, and the affection with which he treated his two children. Leif's point of view is a critical one as it allows the reader to assess the events that stigmatized Clara from a more objective perspective and better comprehend the complexity of the familial liaisons that formed the basis of her personality. Leif's narrative pace is analogous to his age, slow and thorough, adding an extra layer of plausibility to the text.

The action takes place in Oslo and in Western Norway where Henrik and Clara go often for vacation. The region is familiar to Lillegraven who was raised in a farm in the western parts of the country. Thus, the descriptions of the nature and the surroundings are fastidious and the place takes a life of its own, almost becoming a distinct character that further enhances the beauty of the author's prose. Everything is Mine is the first installment in an intended series of novels featuring Clara Lofthus as the protagonist. The second volume, which will be published in English under the title Blood Ties, is going to be released on July 26, 2022. It would be interesting to see what more has the author to say about the fascinating character she created and I've already pre-ordered the book. The synopsis looks compelling enough and I can't wait to read about Clara's reaction to the abduction of one of her children. With this novel, Lillegraven cements her place in the upper echelons of Norwegian crime fiction writers and there is a lot to be expected from her in due time.