Dostoevsky in Love: An Intimate Life

A bona fide treasure of a book. 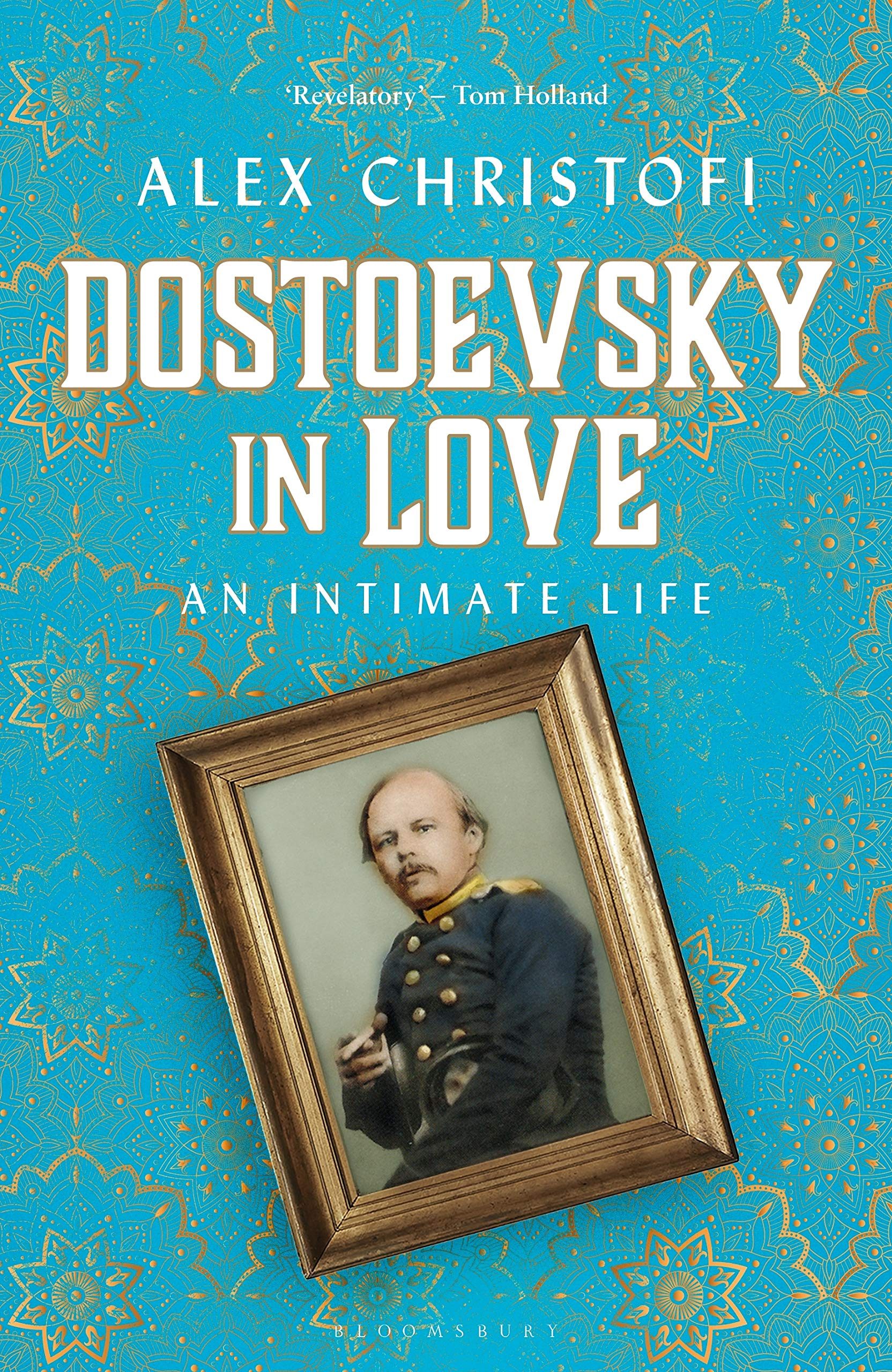 "What would anger most men only saddened him-the sign of a great heart".

The attempt at writing a biography about one of the greatest authors in the history of global literature is no small feat and Alex Christofi, editorial director at Transworld Publishers and author of the novels Glass and Let Us Be True, is worthy of praise for his audacious undertaking that yielded a monumental result. Recounting the tempestuous life of the Russian novelist, essayist, and short story writer Fyodor Dostoevsky through a narrative that combines non-fiction with fiction, making it easier digestible for the bibliophiles who are not keen on reading bone-dry biographies that merely adduce information about exceptional individuals without adding invented, imaginary scenes that would help the reader form a more complete picture regarding the subject of the book which most often refers to the lives of imperative figures whose work has influenced myriads of people. There is, of course, Joseph Frank's iconic 5-volume biography of Dostoyevsky, its length exceeds the 2500 pages, in which one can find anything relevant to the author, his work, the environment in which he was forced to live and create, and his turbulent personal life which was plagued with the loss of many of his truly beloved ones.

In a brief author's note in the beginning of the book, Christofi explains his fascination with Dostoevsky sets his ground rules concerning the format of the text which is replete with "direct quotes reported by Dostoevsky or one of his contemporaries" while the words printed in italics provide the reader with the chance to behold Dostoevsky's thoughts in first-person narration, thus making us feel closer and more empathetic towards him. These sentences "might have been taken from his letters, notebooks, journalism or fiction" and offer the reader the opportunity to get invaluable insights into the Russian author's mind and heart. It is in these specific parts of this book that we are granted access to the shining intellect of the Russian literary giant and his observations and remarks on his own life's hardships and the society's downfall, something that troubled him greatly as it is noticeable in his latest novels where the reader can feel palpably his concern about the mind frame of the new generation which seems to be inclined to think more rationally and egoistically. According to Dostoyevsky this perception of life as a process in which rational thinking and self-interest constitute the primary virtues is doomed to steer away from any hope of salvation.

Dostoyevsky had been brought up in the house of a middle-class family, who nevertheless owned a significant piece of land in an estate outside Moscow, and his childhood was spent relatively happily even if his doctor father sometimes tended to become violent, especially after drinking. His mother, a consumptive woman who fought with the disease for a long time, died in 1837 when Fyodor was 16 years old. To make things worse, after two years his father passed away too, leaving Fyodor and his siblings alone in the world, lacking any kind of parental protection. After a brief spell in the Engineering Academy, Fyodor decided to resign and write his first book under the title Poor Folk, a novel published by Nikolai Nekrasov in Petersburg Miscellany. At the time Dostoyevsky has moved to St. Petersburg and there he met several important figures of literature and youngsters, like him, who dared to think revolutionary thoughts on several crucial issues that beset the Russian society. The most fundamental petition of these radical thinkers was the abolition of serfdom. The term "serf" refers to the enslaved peasants who were attached to a piece of land owned by affluent men and worked there.

As Dostoyevsky was getting deeper into the progressive circles that thrived in St. Petersburg in that era, that is near the end of the first half of 19th century, he became increasingly involved and invested in the causes that he and his comrades were representing and resolved to take action in order to make things right and challenge the existing status quo that suffocated free thought through the establishment of a rigid censorship. Unfortunately, his involvement with certain groups resulted in his arrest and sentence to death by the Tsar. Finally, and after Dostoevsky and his friends suffered the excruciating ordeal of mock execution, he was relieved of his sentence and sent to Siberia instead for four years of hard labor. It is interesting that Christofi chooses the mock execution to be the first image that the readers encounter as they begin to study the text. As a first scene, it has a peculiar effect as we get to see Dostoyevsky in his worst moment of despair, having the certainty that in a matter of seconds he will be dead. This state of dejection followed the Russian author through the course of his later life.

Nevertheless, as only a truly charismatic artist would think and do, Dostoyevsky found inspiration for his stories during the most difficult of times, while being incarcerated in a remote prison where he was forced to perform manual labor. Even though if, in his own words, "in a confined space, even thought is cramped", the master author conceived many compelling ideas for future stories through the fathomless introspection he subjected himself to and the manic observation of his fellow prisoners, their habits, facial gestures, and personal histories. The perennial repetition of the same meaningless tasks each and every day made Dostoyesky feel suffocated and to make things worse reading and writing was prohibited inside the institution's walls. He would be lucky if he could sneak out a letter to his brother Mikhail with whom he shared a strong bond. Later, Dostoyevsky would write a thorough account of his experience in Siberia in his novel The House of the Dead, published in 1860-2 in the journal "Vremya". In this novel, the author portrays the everyday life of prisoners and it is certainly, for the major part, a kind of memoir in which Dostoyevsky disclosed his own, very personal, memories.

After his release from prison, Dostoevsky married Maria Isaeva and moved again to St. Petersburg where, in 1960, publishes the first issue of his journal "Time" ("Vremya") working together with his brother, Mikhail. The "Time Journal" published more of Dostoevsky's early work such as Notes from the House of the Dead and The Insulted and Injured. However, after a new wave of stricter censorship regulations, the journal is compelled to seize its existence, leaving Fyodor and Mikhail both in a pitiful financial situation. It is during that time and the following few years that Dostoevsky began gambling, risking all his savings in casinos around Europe, always losing and becoming more and more indebted to friends who lent him money. At the same time, in the home front things couldn't be grimmer as Fyodor's relationship with Maria seemed to be constantly going through a rough patch, leaving them both frustrated and disenchanted. Dostoevsky's flirtation with a young girl, Polina, also led to a disaster, so the young author started to realize how cruel love can prove to be. Nevertheless, after Maria's death in the April of 1864, Fyodor met the woman that would prove to be the ideal match for him. Anna, a twenty-year-old stenographer who, after an initial rejection to Fyodor's first proposal, accepted to marry him. Together they would spend Dostoevsky happiest years, even though there is of course the tragic event of the death of the couple's first daughter, Sofia, when she was just three months old.

Christofi's narration is smooth and provides a lot of useful information concerning the state of Dostoevsky's mind as he was working on the novels that would subsequently conquered the world and settled his reputation as a writer who dissects human psyche in order to find what is buried deep, the existential void that cannot be filled with frivolous theories such as Nihilism with its emphasis to rational egoism as the most appropriate way of living in the modern world. Despite his doubts, Dostoevsky remained a true Christian at heart and fervently believed to the idea of salvation through the unconditional love of others. That was the reason why he remained hostile to the youth movements that advocated violence as a solution to the grim everyday reality that the majority of Russians were living in. Many academics consider Dostoevsky and Nietzsche as the two intellectuals who foresaw the rise of Nihilism and fought fiercely in order to propose alternate ways of living that would elevate man in moral and ontological terms. Of course, the thing is that even though Nietzsche and Dostoevsky essentially agreed on the threat of the nihilistic ideology, their response was radically different from one another as the German philosopher introduced his theory of Ubermensch and his perspective on the importance of aesthetics in one's worldview, while the Russian writer, faithful to his upbringing, believed that onlu through Jesus Christ's paradigm the human species will find eternal happiness. If you are interested in this subject, I recommend Maia Johnson-Stepenberg's book Against Nihilism: Nietzsche Meets Dostoevsky, it contains an excellent comparative analysis between the two thinkers.

In his course of life, Dostoyevsky met and in some occasions even became friends with other well-known writers and literalists. His circle of acquaintances included Ivan Turgenev, the author of the iconic Fathers and Sons, Nikolai Chernyshevsky who wrote the 1863 novel What Is to Be Done, a book that was very well received and is still considered a classic even if Dostoyevsky thought that it was severely overrated and not worthy of its hype. Furthermore he also met and was forced to collaborate sometimes with obnoxious figures of the publishing world who made his life difficult in more than one occasion. Through Dostoyevsky's interactions with the people closest to him, we can build a humane portrait of him in our heads, sympathizing with his feelings of utter desperation or solitude that often overwhelmed him, especially during the years of his early youth that had been cursed. His relationships with the important women of his life also present a great interest as his behavior towards the fair sex is an indicator of his overall predisposition to the phenomenon of life. Maria, Polina, and Anna are all women whom Dostoevsky loved and shaped several aspects of his overall personality. Plus, Anna's contribution to the creation of the classic novels by the Russian author is not at all insignificant.

I found Christofi's endeavor to be daring and thoroughly successful. Even though it cannot be compared with Frank's majestic, overdetailed research that resulted in Dostoevsky: A Writer in His Time which still remains the obvious choice for those who wish to meticulously study the life of the most significant Russian author along with Leo Tolstoy. Instead, Christofi introduces a spin to the established form of biographies by mixing factual, historical facts with invented, imaginary scenes and dialogues that function perfectly within the narrative as a whole. There is a wide variety of information regarding Dostoevsky's life and Christofi must have devoted a vast amount of hours in research in order to be able to achieve that level of expertise and knowledge on his subject. Dostoevsky in Love is not a lengthy book, it just exceeds the 250 pages, and it is such a delight to indulge in the 19th century Russia and encounter characters whose work shaped the literary reality of the later generations. Dostoevsky fanatics should not miss this title, it would be a crime, even if you have already read Frank's majestic biography. This book will invoke feelings to the reader and exudes such wonderful aromas that a simple biography is impossible to enclose.

Dostoevsky in Love: An Intimate Life