A Canadian neo-noir saved by its great sense of location.

This is an independent production, directed by a young auteur, Albert Shin (In Her Place) and set in the picturesque Niagara Falls in Canada. Disappearance at Clifton Hill is an ambitious project and the director uses many well-known tropes of the mystery/thriller genre such as the small-town mystery, the eccentric female protagonist, a twisty plot, etc. The final result is a decent film that can be categorized as a neo-noir, but nothing beyond that. The story is pretty formulaic and the development of the plot, though full of twists, is predictable at least to the eyes of the hardcore fans of the genre. The film's main asset is its great cinematography and the sublime use of the scenic Niagara Falls landscape that is the real and only protagonist of the movie. The cast is consisted of, more or less, non-commercial thespians who, nevertheless, do a good job in both protagonistic and supporting roles. Tuppence Middleton (The Imitation Game, Sense8) plays Abbie, a young woman who lives in Toronto and returns to her hometown in Niagara Falls when her mother dies. There she meets again her younger sister, Laure (Hannah Gross), and together they meet their family lawyer to learn about their mother's will. The family owned a shabby motel in the town that is now mortgaged and ready to be sold in a posh firm.

Abbie has a secret from her childhood that we watch in the first scene of the movie. As she was on the beach along with her parents and sister, her eye catches a young boy deeper in the woods who seems to be severely injured as his one eye is covered with bandages and blood is dripping from the wound. Immediately after that, a car stops in the driveway in front of the boy and a mysterious couple, a man and a woman, kidnap the boy whom they put in the trunk of their car. The horror that little Abbie has witnessed followed her throughout her life and now that she is back to the scene of the crime, she embarks on a perilous journey to find out what happened to the poor kid and who the culprits might be. Soon, she discovers that only four days after the incident with the boy, a suicide of an eight-year-old kid was reported. Abbie connects the two events and she will have to delve deeper into the little town's secrets that some wish to remain buried forever. Unfortunately, Abbie, due to past misdemeanors will struggle to convince Laure for her theories while the local police seem to be totally indifferent to her wild assumptions and speculations. Near the end of the film, we learn the reason why Laure is so reluctant to take for granted what Abbie is saying. She suffers from a severe condition that leads her to obnoxious, inexplicable behavior. I suppose that at that point, the director wants the audience too to doubt about Abbie's state of mind and suspect her as a possibly unreliable narrator.

The film's main flaw is its failure to create any kind of suspense and tension that will grip the audience. The tempo is flat and there is no proper build-up to the climax which also seems to be inadequate and unsatisfying. Nevertheless, I should note that the final scene which includes the big, final twist, is very well-shot and warms the hearts of the viewers with its optimistic character. I wouldn't say that Disappearance at Clifton Hill is an unmissable thriller or one that will stick to your memories for long after watching it, but if you enjoy films with amazing cinematography and you are willing to overlook some problems in the plot and the pacing, then you should give it a try. It is only the third directional feature film by Albert Shin who has a promising future if he is more careful to the stories he chooses to shoot and avoid some mistakes that originate from his inexperience. 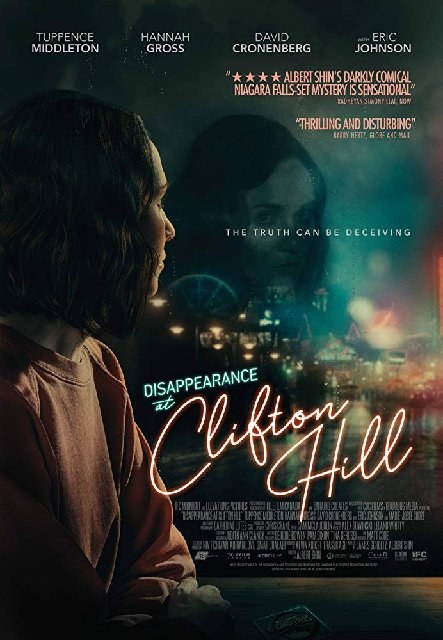