Lost in the mist of obsessive love.

In his first feature film since The Handmaiden (2016), the South Korean master of grotesque and director of the "Vengeance" trilogy, consisting of Sympathy for Mr. Vengeance (2002), Oldboy (2003), and Lady Vengeance (2005), Park Chan-wook delivers an amalgam of police procedural and romantic love story, navigating many different genres while always retaining his keen eye for visual style, his trademark par excellence. Even though Decision to Leave is definitely not Park's magnum opus and there are several issues dragging the movie down, the level of technical mastery as displayed in the framing and shot composition as well as in the employment of cinematic techniques that bring forth the film's tone, unveiling the director's intentions and personal take on the main themes, is impeccable. The strong thematical references to Alfred Hitchcock's classic masterpiece Vertigo (1958) and Erik Skjoldbjærg's Insomnia, a film remade in the U.S. by Christopher Nolan in 2002, are conspicuous and a true cinephile will detect them instantly. Park has acknowledged his heavy Hitchcockian influences in the past by affirming that "Vertigo is the film that made me want to become a filmmaker. As someone who didn't go to film school, Hitchcock was my film school". The story, set in Busan and featuring a despondent detective-protagonist who suffers from crippling insomniac spells, is overly complicated and I believe that a re-watch is essential for the viewer in order to grasp the nuances of the dense, multi-layered plot. In fact, I felt frustrated at times due to not being able to connect names and faces, especially during the first 45 minutes of the runtime, or to pinpoint the relation between certain critical plot points and the two protagonists. As the ending edits started to roll, I realized that I had many questions with no respective answers in respect to the story.

The director himself has set the tone of his latest film by stating: "I wanted to make a film telling a love story without saying the words 'I love you'". Toward this endeavor, he used diverging genre elements, even adding some moments of comic relief that would otherwise feel out of place if the director was not as talented as Park Chan-wook. The film can be, thematically, divided into two main parts with the first being adherent to the rules of a typical detective drama and the second allowing the director to unleash his distinctive brand of narrative style. If the tone of a movie refers to the artist's/creator's feelings and intentions in regard to their subject matter and the mood applies to the feelings elicited by the audience during the process of watching, then those two factors balance on a perfect equilibrium here as the film is pervaded by an all-embracing ambience, a low-key atmosphere with no violent explosions as in Park's previous works, counting on the dialogue and visuals to tell the desperate love story between a lonely man and an insidious femme fatale. In an interview that he gave about the Decision to Leave, Park said that his main objective was "to create a film that subtly and imperceptibly pulls the audience in and captures their interest". The South-Korean auteur didn't use his usual director of photography, Chung-hoon Chung, but collaborated with Kim Ji-Yong, mostly known for his involvement in the 2019 gem Parasite, who enhances the understated atmosphere through the use of a variety of cinematographic choices that eventually bear fruit. The fast editing, many close-ups as well as the POV shots of the protagonists provide additional depth to the characterization, thus amplifying the overall narrative vigor. The soundtrack by Cho Young-wuk is in complete harmony with the film's tone and its mesmerizing, soporific effect puts the audience in the detective's hazy, dreamlike state of mind, aggravated by his sleepless nights.

The story begins when the body of a man is found in the bottom of a cliff in Busan. Is it an accident, a suicide, or perhaps even a murder? Detective Hae-jun (Park Hae-il ) is called to investigate the case and he is quickly fascinated by the deceased's wife, Seo-rae (Tang Wei) who doesn't seem to harbor any feelings of grief, something that makes her a prime suspect for the majority of Hae-jun's colleagues. Hae-jun and Seo-rae have their first encounters in the police interrogation rooms where the young woman is asked about her relationship with her late husband and her personal life is put under the microscope of the authorities. Seo-rae is Chinese and her Korean are far from fluent, so she frequently has trouble expressing her thoughts and feelings to the others in her quotidian interplays. The cultural and linguistic dissonance between the two protagonists adds to the friction that characterizes their newborn relationship and, in a way, reflects the turbulent relations between China and Soiuth-Korea. Hae-jun will be drawn into a world of lies and deceit and he will face moral challenges that will permanently shake his perceptions of self and individual worth. It is apparent from the beginning that the detective's romantic feelings are not truthfully reciprocated from the elusive Seo-rae and the audience waits to see how wide the net of chicanery really is and also how far Hae-jun is willing to go in order to win over his object of passion. The morose investigator has a "weekend marriage" with a wife that he sees only when his professional duties permit it. Is Hae-jun, a previously conscientious and honorable man, falling into a honeytrap set by a devious woman who manipulates him for her personal gain or is there a chance that she also has intimate feelings about the detective?

The purely crime-driven storyline is alternated with scenes in which we watch Hae-jun's obsession being born and evolving while Seo-rae's true motivations are disclosed gradually through a series of consecutive plot twists and revelations upturning the story as told theretofore. Remember that this is not a whodunit, so do not expect a mystery in the likes of the cozy tradition. The detective drama is avowedly overshadowed by the narration of the relationship between the two protagonists who are in fact the only significant agents in a story that, sadly, has the bad habit to introduce to the audience several secondary characters whose arcs are inadequately explored and their position within the story's general context is vague. There are no violent sequences, and it should also be mentioned that Decision to Leave, despite being a love story in its essence, doesn't feature a single sex scene. Viewers who are familiar with Park's directorial style and selection of main themes and tone will wonder if he is the man behind the camera. Perhaps, this film is meant to signify a change of course for the 59-year- old auteur who might have decided to experiment with other forms of storytelling, bearing little or no resemblance to those employed in the earlier movies that made him popular throughout the world. The only thing reminiscent of Park's spirit in filmmaking is the visual clarity that is brilliantly emulated in the close-up shots of Hae-jun using collyrium to clear his vision, an astute, metaphorical image for the director universalis, eternally struggling for lucidity in his imagery. The dominant icon of mist acts as a symbol for the protagonist's state of mind who is seen navigating his vehicle through opaque fog in the first minutes of the film with the director using that particular image to introduce Hae-jun to the audience.

It is certain that this is a title that remains oblivious to stern genre categorization, and it is apparent that this was Park's initial intention. However, the movie sometime feels like lacking clear orientation, flirting with various types of storytelling without ever finding its singular identity, thus losing decisive points in the overall assessment by the critics and audience. Furthermore, the femme fatale trope is overused since time immemorial in cinema and literature, thus the use of such a narrative tool surprises the viewer who expects something more innovative, even sometimes radical, from a director of Park Chan-wook's caliber. It is quite a turn for an artist established as a creator of rhapsodical revenge melodramas enveloping themes such as extreme violence, ethics, redemption, and absolution. Personally, I thought that it was an interesting spin on the classic love story, but I would prefer a more consistent plotline, lacking the overt intricacy that will baffle the vast majority of the viewership. The two lead actors, Park Hae-il as Hae-jun and Tang Wei as Seo-rae, do a terrific job and their performances are one of the film's primary assets. More specifically, Wei's alluring presence can be compared only with the most legendary cinematic vamp seductresses of the noir films of the 1940s and 1950s. Decision to Leave won the Best Director Prize at the Cannes International Film Festival (2022) and was also nominated for the illustrious Palme d'Or, the festivals preeminent award, a reliable guide for cinephiles seeking quality productions to watch, that replaced the Grand Prix du Festival International du Film in 1955 and is considered to be one of the most prestigious prizes in the film industry worldwide. Furthermore, the movie was South Korea's official submission for this year's Academy Awards (Oscars), proving that it is a title which was well-received, at least by the critics. Watch it to form your own opinion. 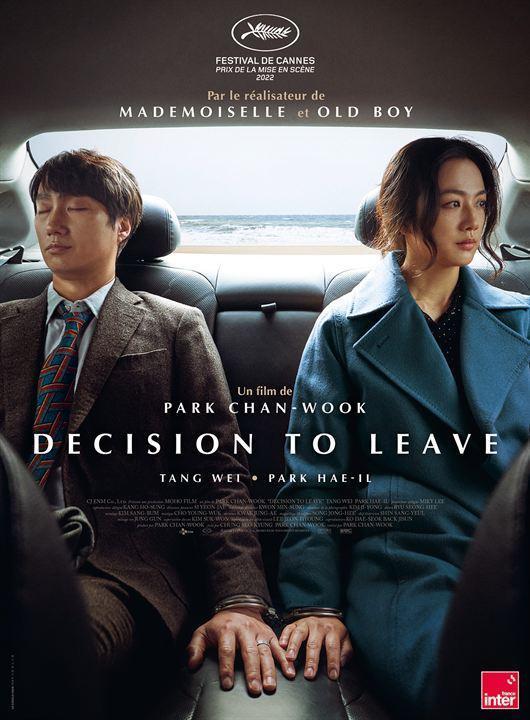