An excellent television adaptation of the first novel in ''Fall of the Welfare State'' series, written by the famous Swedish criminologist and author, Leif G.W. Persson.

All authors of the infamous Nordic Noir genre owe a great deal to the Swedish criminologist and crime fiction writer, Leif G.W. Persson. His trilogy about the -still-unsolved- Palme assassination and the subsequent investigation from the Swedish Police is a monumental work that blends perfectly two genres, crime fiction, and true crime. Persson provides the reader with a fictional account of the Palme investigation, but the story is solidly based on the real, hard facts around the incident that changed Sweden forever. The story is narrated in two distinct time dimensions: in the present, 26 years after the Palme execution, Superintendent Lars Martin Johansson is recruited to unofficially reopen the cold case to reveal the truth and redeem the Swedish people of an open wound. Johansson assembles a team of efficient police officers who face the impossible task to achieve what the whole of the Swedish police force failed to do for a quarter of a century. The past timeline recounts the last months before the Palme murder, recording the conspiracies and intrigue that finally led to it.

Rolf Lassgard is an experienced and renowned actor and he delivers a solid performance as L. M. Johansson. But Jonas Karlsson steals the spotlight in his role of the sadistic sociopath Klas Waltin who lacks any moral compass and will stop at nothing to get what he wishes. Furthermore, the dialogue parts are of high quality and offer a lot of memorable quotes to the viewer. The plot is dense, with multiple subplots that are always connected to the story's arc and the pace of its unfolding is rather fast, but without becoming confusing. Death of a Pilgrim is a dark and grim tv series, shot in gloomy, grey tones with nearly no sympathetic characters but it forces the viewer to watch more due to the high levels of quality in every aspect of the production.

It is a chance for the viewers who are not familiar with L. G. W. Persson's novels, to be introduced to the mind of a contemporary -Scandinavian- master of the genre. Moreover, if -for any reason- you are specifically interested in the Palme case, this series is a good first step to learn the basic facts and theories. To sum up, Death of a Pilgrim is a must-see for fans of quality crime fiction and true crime. 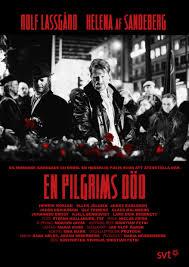