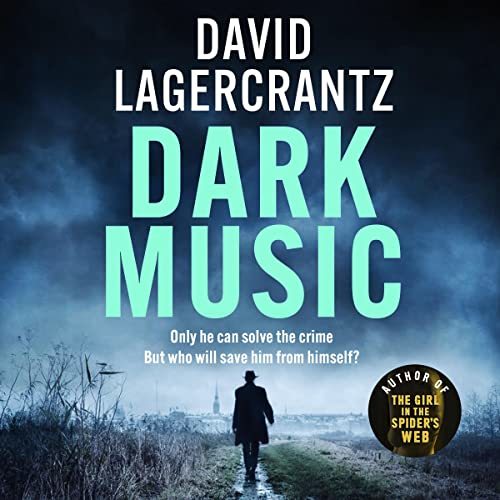 "Darkness not only conceals, it also transforms. Corrupts".

David Lagercrantz, one of the most celebrated Swedish journalists and fiction authors, known to the masses from the continuation of the infamous "Millenium" trilogy written by the late Stieg Larsson and the best-selling biography of the legendary Swedish football player Zlatan Ibrahimovic (I Am Zlatan Ibrahimovic/2011), returns with the first installment in a new series of crime novels, featuring detective Micaela Vargas and the mercurial professor Hans Rekke as the protagonists. The readership had already had the chance to assess the author's writing style through the fourth, fifth, and sixth volume of the "Millenium" saga, while those who are older will remember him from his work as a crime journalist in one of the country's biggest newspapers, "Expressen", during the decades of 1980s and 1990s. Lagercrantz's experience as a reporter has left a deep imprint on his prose, thus adding plausibility and realism to the text, as it is evident in Dark Music, a novel that transcends genre categorization, incorporating elements from the classic police procedural as well as political thriller aspects that prompt the reader to make his own inquiry on the book's gloomy main theme, that is the anti-terrorism hysteria that conquered the western countries after the traumatic events of 9/11 in the U.S. and the establishment of torture prisons in Afghanistan by the CIA, during the years of the American intervention there. Lagercrantz certainly devoted many hours researching the nightmarish nature of the so-called "Black Spots" or "Black Sites" and the information conveyed to the reader is shocking, making us aware of a reality that we don't want to acknowledge. The smooth translation by Ian Giles leaves nothing to be desired and guarantees a first-class reading experience, a top-notch rendition of the original source's well-rounded text.

Dark Music is a novel that is equally based on the peculiarities and idiosyncrasies of his main protagonists, especially those of Hans Rekke, and its intriguing plot premise that involves corruption in the upper echelons of the Swedish police force and politics and their American counterparts. Nevertheless, the novel is actually narrating a revenge story, born and bred in the faraway Afghanistan during the terrible days of the Taliban dominance that led to the persecution of musicians, especially those with influences from the west, and the destruction of several musical instruments which were seen as enemies of the religion and distractions destined to lead the folk further away from their one and true God. I was stricken to read and learn that the Saudis banned music in 1978 and one year later in Iran, Khomeini did the same. It seems outrageous to us, citizens of the western democracies, that a form of art as potent and respected as music can be outlawed and its practitioners to be treated as common criminals by the state. The music ban in Afghanistan, established by the Taliban regime began in the late 1990s and the harassment of peaceful musicians became an everyday phenomenon throughout the country. Smashing of musical instruments in public was practiced by the Talibans extensively and eventually musicians became afraid to perform even within the confines of their home as they were afraid that someone may hear and notify the authorities, something that would definitely lead to serious trouble.

Apart from the music ban part, the novel focuses on another hot issue that became the subject of debate internationally during the last two decades, and that is the existence of torture prisons, built by the American state in Afghanistan. The secret prisons were acknowledged by U.S. President George W. Bush during a speech in 2006 and the rumors regarding the employment of torture methods such as exposition to cold, darkness, and loud music by the site operators quickly spread and became a controversial issue in the U.S. as there were many who believed that the war on terror necessitates such actions, while others maintained that a modern state such as the U.S. cannot be involved in such dark deeds. Hans Rekke, the Sherlockian ex-Stanford-professor who becomes entangled in the police investigation of the murder of one Jamal Kabir, an Afghanian immigrant who gets killed with a stone after a local match in Grimsta, is an expert in the "enhanced interrogation techiniques" (a euphemism for torture) and when he lived in the U.S., he was often employed by the American authorities to help with the assessment of interrogation transcripts and decide whether or not the interrogated part knew more than he was letting on or not. For Rekke., "torture has its own cultural peculiarities, its own fingerprints. Not only you can trace the perpetrator, but you can also trace the context he is operating in. The ideology beihnd it leaves its traces on the tortured body". Adopting this method, he will be able to offer his critical help to Micaela and her colleagues who seem to be stuck with the investigation for several months.

The story begins with the death of Jamal Kabir, an Afhganian immigrant who is found dead in the woods in Grimsta after the ending of a football match in which he was the referee. The authorities will quickly apprehend their prime suspect, a local lowlife drunk who has proven to be violent in the past, but soon their case is rejected by the prosecutor as they lack the substantial evidence needed in order to prove the man's guilt. Micaela Vargas's superiors decide to talk with professor Hans Rekke, a mysterious figure who is an expert in interrogation techniques and his observational skills are only comparable to the one and only Sherlock Holmes. Rekke's remarks on the case, irritates the top brass as they upend their whole investigation and exonerate their suspect(s). As the months pass by, the case turns into a cold one and the investigative officers are at a loss, having nothing to move the case forward and pinpoint the perpetrator. However, Micaela, a single-minded and persistent individual will begin her own personal inquiries after a chance encounter with Hans Rekke who, after a failed suicide attempt in the Tunnelbana rail tracks of Ostermalmstorg station, will accept Micaela's help in order to get better. Together, and despite Rekke's rapidly deteriorating physical and mental health, they will trace the clues that the police had missed and their team work will be finally appreciated by Micaela's colleagues who were initially suspicious about Hans. Their inquiries will lead them in Afghanistan's recent dark history and the American response in the terrorist actions in New York in 9/11, 2001.

Hans Rekke is definitely on the spotlight as he is a compelling character, bearing some unique charismas that render him invaluable in a criminal investigation, but his unbalanced mentality and impulsive actions, such as his suicide attempt in Tunnelbana in the beginning of the novel, put his personality under a whole different light as the story progresses. Hans is addicted to a variety of drugs such as benzodiazepines, morphine, ritalin and a whole galaxy of uppers and downers that help him to stabilize his mood and offer him relief from the severe depressive spells that torment him. While being manic, Hans has the tendency to make a lot of enemies as his insistence to tell the truth despite the possible consequences often puts him on the wrong side of his peers, thus leading to interpersonal conflicts. Lagercrantz discloses his protagonist's background in broad strokes and we learn, mainly through the discussions of Hans's daughter Julia with Micaela in the beginning of the novel, that he was born and raised in a peculiar family and his fraught relationship with his mother defined and still dictates his behavior. Destined to become a piano prodigy from his early childhood, Hans was quickly drawn to the intellectual world and his pathos for order and clarity turned him from an aspiring artist to a dedicated rationalist whose power of perception led him to a brilliant career, that culminated with his appointment as a professor in the respected University of Stanford. The abandonment of his promising piano course resulted in a bitter dispute with his mother who was, according to Hans's own words "the impresario for hell", a strict and demanding authoritative figure who oppressed her son in many ways. His scientific research on torture methods and the interrogation techniques in his book "War and the Art of Telling the Truth" make him the prime candidate to examine Jamal Kabir's case as it becomes apparent in the post-mortem examination that the victim had been subjected to torture in the past.

Micaela Vargas is a young woman from a humble background, "a girl from the hood" as she likes to describe herself, and a competent police officer who, nevertheless, struggles to survive in a man-dominated working environment that often clips her wings and forces her to investigate second-rate cases. Her timid origins contrast with Hans Rekke's aristocratic disposition that is evident, inter alia, in the cliched pleasantries he often uses in order to communicate with the others, even the people closest to him. However, it is that comparison that, inexplicably, seems to help in the development and strengthening of their relationship as Micaela sees in Hans the traits that she longed for herself since she were a child. Without being the typical pretty girl stereotype, her looks radiate explosivity and indicate her fierce temperament that becomes eventually a trademark for her as a character. Her sharp intellect urges her to focus on the -many- flaws and inconsistencies in the initial investigation on Jamal Kabir's murder and she seems keen to follow her father's advice that was "always go back to the source- to what preceded the interpretations that laid themselves like a filter over developments", a quote that became her mantra ever since her early years. Micaela shares a difficult liaison with her brother, Lucas, who is a prominent member of Stockholm's underbelly and his criminal tendencies put Micaela in crosshairs with her superiors who use Micaela's affinity with Lucas as leverage in the professional rivalries within the police force that excluded her from the investigation in the first place. Furthermore, Micaela becomes invested in the case as her own father had been tortured in his youth while being in Chile. The chemistry between Micaela and Hans is perhaps the novel's strongest asset as Lagercrantz excels in characterization and creates two protagonists that will remain in the reader's minds for long after finishing reading this book.

As I already mentioned in the previous paragraphs, the story is dismal and the motifs of torture and oppression of artists may prove to be too much for the readers who are faint at heart or oblivious of the Nordic crime fiction's tropes and choice of main themes. However, Lagercrantz reduces the shock effect by weaving a mystery compelling enough to keep the reader hooked from the first page until the last, while at the same time remaining prudent enough to take his time in the precious character development that results in the introduction of two of the most beguiling protagonists in the genre's works: Hans Rekke and Micaela Vargas. There are no extensive descriptions of torture within the text, the subject is handled expertly by the author in such a way that supports the overall plot structure without depressing the reader with needless representations and wordy details of such appalling acts. Overall, Dark Music is a special type of police procedural that reaches its solution through grand leaps of intuition rather than the old-fashioned solid footwork and the conduct of excruciating interrogations. It's not the police force that leads the Jamal Kabir investigation but solely Micaela and Hans who collaborate and conclude the case themselves during a short trip to Cologne, Germany. I would like to thank Netgalley and MacLehose Press for providing a free ARC of this title and also to send my regards to Milly Reid who selected TapTheLine for the blog blast of the novel, even though I couldn't upload my review in the expected date (18 August). Please excuse my tardiness.