Dario Argento's comeback after a decade of silence.

After a long period of directorial inertia that lasted for ten years, the patriarch of the notorious "giallo" filmmaking and prodigy director of the most popular Italian horror movies of the previous five decades, Dario Argento, returns with a new film, Dark Glasses, having Franco Ferrini, known to the global audience as one of the co-writers of Sergio Leone's classic Once Upon a Time in America, by his side as the screenwriter. This movie can be seen as an attempt to revive a fading (sub)genre that mainly thrived during the decades of the 1970s and 1980s, despite the fact that its origins can be traced a bit earlier, in the late 1960s. Giallo (Italian for yellow) films took their name by the color of the covers of Italian pulp fiction novels and the term, that was initially tethered within the confines of literary circles, soon found application in the silver screen universe by directors such as Mario Bava, Lucio Folci, and Sergio Martino. Bava was the one to direct the first giallo film ever, titled The Evil Eye (original title: La ragazza che sapeva troppo), in 1963 and introduced the audience to a new type of thriller with strong ties to the horror genre, standing out due to the employment of distinctive theme tropes and extravagant visual style. There are many who claim that the Italian giallo tradition heralded the emergence of the "slasher film", born in the U. S. and becoming a commercially lucrative type of horror film during the recent decades. The proclivity to explicitly depict scenes of extreme, gory violence with blood being shed non-stop for many seconds, even minutes sometimes, is the common denominator between the two corresponding sub-genres, that also share some controversial aspects that I will explain later in this review.

Despite Bava was the one who popularized the giallo sub-genre among the European audiences in the early 1960s, when someone hears or thinks about that particular brand of films, the name that automatically comes to mind is that of Dario Argento. Son of a father who was a film producer and executive, Salvatore Argento, and a photographer mother, the Brazilian Elda Luxardo, Dario took an interest in arts from his early childhood and before entering the world of filmmaking, he worked as a film critic for magazines and as a columnist for a newspaper in Rome. A milestone moment in his life had been his encounter with Sergio Leone in 1968 and his subsequent involvement in the writing of the screenplay for Leone's spaghetti western "Once Upon a Time in the West" along with the director himself and Bernardo Bertolucci. This was the magic moment that initiated Argento to the world upon which he was destined to leave his own, unique imprint in the future. In 1970, he made his debut with The Bird with the Crystal Plumage that became an instant hit in Argento's home country, the first movie in a series that would extend to the following half-century, earning him the nickname "Italian Master of Horror". His most notable works are Suspiria (1977), Deep Red (1975), and Opera (1987), all productions sharing certain trait similarities that comprise the director's singular visual style. More information about Argento's life and work can be found in his autobiography Fear: The Autobiography of Dario Argento, where the Italian auteur recounts the various stages of his illustrious career and shines a light on his personal idiosyncrasy that inevitably influenced his artistic creativity.

Dark Glasses is, without a doubt, not among Argento's best movies for reasons that I will attempt to summarize later and remains in shallow waters, failing to reminisce to the audience the trademark hair-rising terror that sealed the director's earlier work. The protagonist is Diana, played by the stunning Ilena Pastorelli, who works as a high-end escort to earn a living. While Diana lives and breathes in the Eternal City visiting clients to their houses, a serial-killer is stalking the streets, attacking prostitutes in the most brutal of ways, strangling them with cello rope. The movie commences with a beautiful scene, Diana witnessing the phenomenon of solar eclipse in the sky, by which Argento foreshadows in purely cinematic terms the development of the story that will find Diana permanently losing her eyesight after engaging in a fatal car-crash resulting to the death of the couple sitting on the front seats of the other vehicle. The crash is a result of a frenzied car-chase, with the unknown killer hounding Diana who, in her desperate attempt to escape, loses control of her cart and collides with a passing sedan in which a family of three is sitting in the front and back seats. Diana is facing a tough predicament as she has to reorganize her whole life as dictated by her newfound disability and the first days resemble hell with the protagonist still fighting with feelings of fear and guilt generated during the course of the catastrophic night that changed her life forever. Due to her strong feelings of remorse, Diana tries to approach the only survivor of the accident, the little boy who lost both his parents, Chin (Andrea Zhang).

A peculiar form of bond will begin to develop between the two completely different characters and their relationship is the main source of dramatic, character-driven tension in the movie. Chin will escape the orphanage in which the authorities put him after the loss of his parents and seeks refuge in Diana's house. She will agree to help him evade police who search for him everywhere, partly out of compassion but, most importantly, because she cant's shake the sense of overwhelming guilt, derived from blaming herself for the death of Chin's mother and father. Even though Dark Glasses adopts the serial-killer thriller tropes as many of Argento's earlier works and also incorporates those imposed by the giallo heritage, it also aspires to be a film about the connection of two people for whom life has become unbearable for different reasons. Despite the visually bombastic, highly stylized fictional universe that Argento creates, he maintains a free space for some more humane aspects and this movie is a prime example of an attempted equilibrium between the representation naked terror on -screen and proper character development based on the screenplay's qualities in regard to the dialogue. The 82-year-old Italian master has said about his movies: "Inside, at the core, there is truth, something real, something deep that comes from inside me, from my dreams, from my nightmares". The scenes in which Diana and Chin interact are alternated with the sequences of barbarous murders committed by the prostitute serial-killer. The bloodshed is there, of course, but doesn't monopolize the film's runtime, in fact I was kind of surprised to watch an Argento film devoting so much time to the characters who are usually cardboard-like and bland, following giallo's apparent disregard for realism with reference to the dialogue and character growth. Perhaps, 82-year-old Argento opted for a more mature storyline and decided to deviate from his usual standards.

However, the problem is that Dark Glasses cannot be classified neither as a character-driven drama nor a thoroughbred giallo picture as the feeling conveyed to the audience is that the creators couldn't decide in which way the narrative is supposed to be headed and the final result is a movie that succeeds in letting down both those who expected a typical Argento horror film and the audience who classify those production as b-movies and are drawn to a more artistic version of storytelling in thriller/horror movies. This film also lacks the visual intensity that was omnipresent in Argento's work with the predominant use of colors, mostly red, and impressionistic imagery that sticks to mind. Dark colors are mostly selected, though their existence doesn't succeed in enhancing the story's narrative strength, the way in which the intinction constituted a storytelling form in itself in the Italian director's earlier movies. The story's build up is deficient and any sense of rhythm is completely absent. As a result, watching the movie frequently feels like witnessing a string of disjointed scenes, lacking cohesion and directorial orientation that would provide the essential dramatic integrity. On the plus side, Arnaud Rebotini's soundtrack is exemplary, though unfortunately not enough to compensate for the major flaws in most of the other aspects of this production. Die-hard Argento's fans will remember the audio composed by the director's favorite Italian progressive-rock band, Goblin, a group known for creating film scores and the one that furnished with music Argento's pinnacle movies, Deep Red and Suspiria. Those who claim that Argento is in fact a misogynist will find ground to support their theory in this one, as the female body is objectified and the choice of the protagonist's vocation as a prostitute further stress that point. Of course, it doesn't help when the Italian director himself makes statements about beautiful women such as this one: ""If they have a good face or figure I would much prefer to watch them being murdered than an ugly girl or man". The misogyny accusation is also hurled against the slasher-films featuring a similar treatment of women. Sexploitation is a sin that giallo and slasher-films are sharing. This is the main controversial similarity that I mentioned in the end of the first paragraph of my review.

Overall, Dark Glasses is nothing more than a b-movie that, nevertheless, bears the signature of an eminent European director whose work has been the subject of books and debate for several decades. It is a film that will appeal only to Argento's hardcore devotees who want to watch each one of his works, regardless of the negative reviews. For those who wish to additionally explore Argento's magnetic artistic persona, keep in mind that, apart from his autobiography that I mentioned in the previous paragraphs, there is also another book that is worthy of your time and attention and that is Alan Jones's Dario Argento: The Man, The Myths & The Magic, published in 2012, containing a vast number of features, interviews, reviews, critical pieces etc. on the Italian filmmaker and communicating a complete picture of his oeuvre. 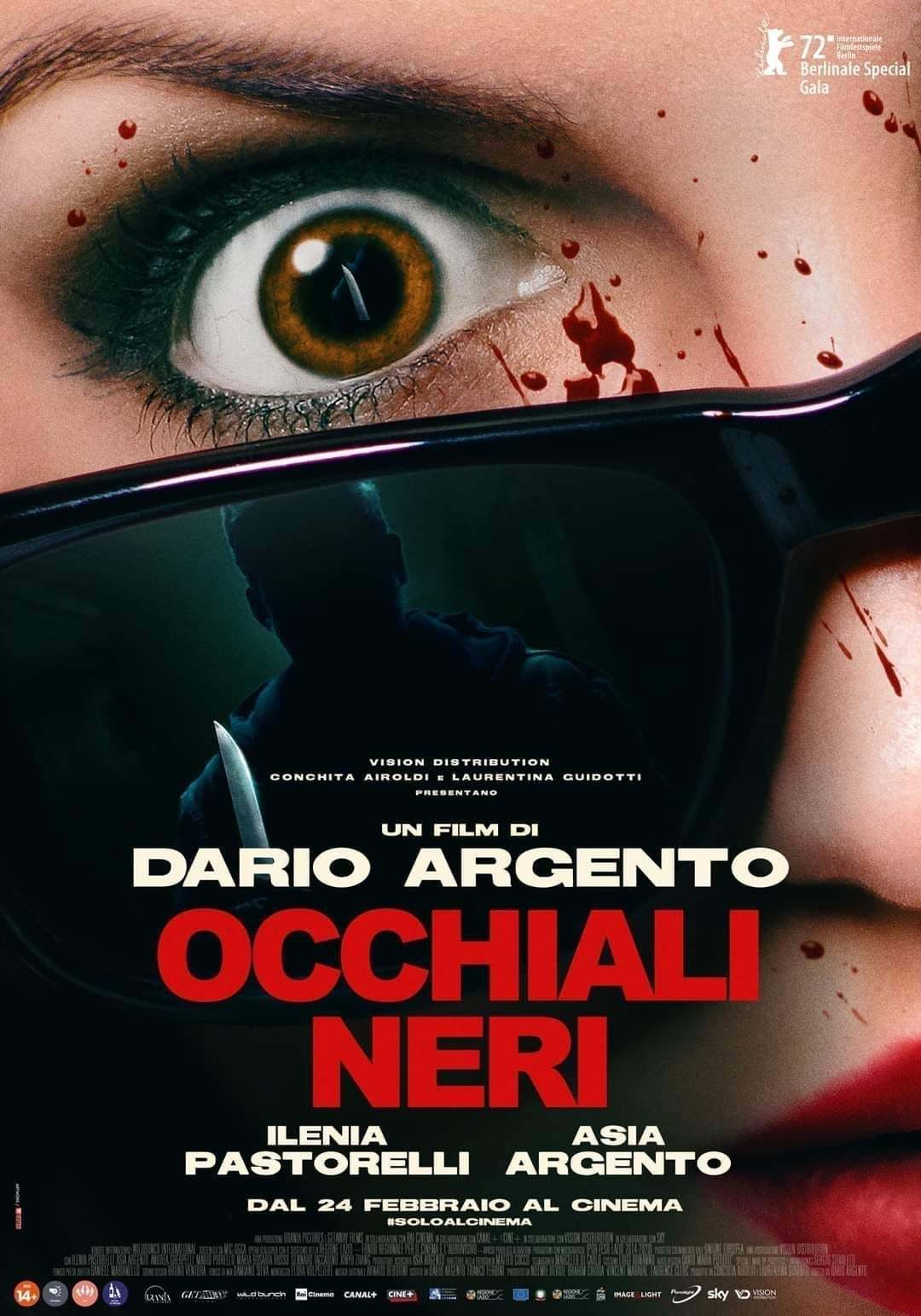