"Ι believe in the god of carnage whose rules have been unchallenged since time immemorial".

The above line belongs to Christopher Waltz who is superb in his portrayal of the unpleasant and in many times even annoying, Alan Cowan who is visiting along with his wife, Nancy (Kate Winslet), the parents of a kid that got in a nasty fight with their 11-year old son, Zachary, which led to the serious injury of the one. Michael (John C. Reilly) and Penelope (Jodie Foster) are Ethan's parents, the boy that got beaten with a stick by Zachary. The meeting is arranged in order for the two couples to straighten up any misunderstandings in a civil manner and write a common report of the incident that happened in the kid's school. As time passes, the arguments get more and more heated leading in a climax where all four characters of this theater play (written by Yasmina Reza), are literally screaming.

This is an one-room movie, directed by Roman Polanski, based solely in its great dialogue and the good performances by the small cast. I think that Christopher Waltz gives the best example of a careful and subtle approach to his role as Alan and Jodie Foster is also excellent in her portrayal of the nervous, borderline hysterical, Penelope. Carnage is a short film in length (about 80 minutes), with literally no action parts and the sole focus is on the characters and their strained relationships. While at the beginning the dispute and conflicts between the two couples, as the story unfolds there seem to be a lot of cracks and bickering between the couples themselves. As the film reaches its end, it is clear that the Longstreet's living room has become a war-zone and that every man (or woman) is for himself.

Some may view Carnage as a social satire, targeting the upper-middle-class hypocrisy and lack of moral direction while others will simply indulge in its many merits without caring for a strict genre categorization. I belong to the second group and I choose to watch this film as a work of art mainly and not a medium of expressing political ideas. One must not miss the artistic wholeness of this movie by searching for any possible hidden meaning behind every line. I believe that Carnage is worthy of its director's name as it is a bold attempt of transferring a theater play in the silver screen. 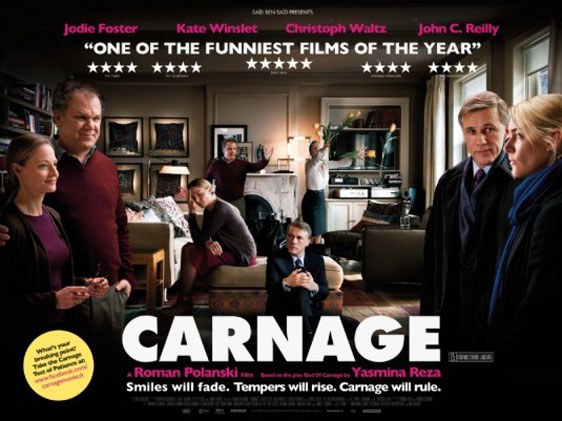