Crime and punishment in agricultural Scotland.

An unacknowledged gem, Calibre is a dark crime film portraying the fatal consequences of a tragic hunting accident in the deep forests of Scotland and the agony of the two perpetrators who watch their lives being turned upside down as a direct consequence of a catastrophic mistake. What begins as a relaxed vacation trip in the countryside for two childhood amigos ends up in a disturbing nightmare when they shoot a little boy instead of a deer and they decide to cover their tracks without alerting the authorities. Vaughn and Marcus will have to hide their fateful deed from the small community of the nearby village that coincidentally celebrates the solstice with a grand festival destined to bring the local society closer to each other.

Vaughn (Jack Lowden) is a young man who is soon going to be a father. In order to fulfil his expected obligations, he adopts a low profile behavior and he comes across as a rather shy, timid individual. Marcus (Martin McCann), on the other hand, is the wildest of the two as he loves to party, abuses alcohol and cocaine and exhibits a more promiscuous sexual attitude. When the duo arrives in the tiny hamlet which is set somewhere in the vast expanses of rural Scotland, they visit the local bar where they meet Logan (Tony Curran), a local hotshot who seems to have the last word on everything concerning the community's workings.

The next day, they go deer stalking in the adjacent woods and Vaughn, heavily hungover from the previous night, accidentally shoots a boy. Shocked by his appalling deed, Vaughn is confronted by the boy's father who rushes to the scene and threatens Vaughn with a rifle. Marcus intervenes and kills the father without a moment's hesitation to protect his precious friend. In a state of profound panic, the two of them flee back to the village and agree to return to the forest in the night to bury their victims. Unfortunately, the boy turns out to be Logan's nephew and the two protagonists soon realize that the villagers are on to them so they have to act quickly and stealthily. As the noose is tightening, Marcus and Vaughn will be forced to make difficult decisions to save their own skin.

Even though Calibre features a gloomy and depressing storyline, there is no explicit violence or gory scenes depicted on screen. It's a suspenseful slow-burner of a thriller counting on the talent of the cast and its well-crafted script that elicits the audience's emotions and engagement from the first scene until the -brutal- finale. We know, as we are watching, that this is a tale that will not end well for the protagonists who did something unforgivable and attempted to skip the repercussions of their actions. Nevertheless, at the same time, we get to sympathize with their predicament as both Lowden and McCann interpret their characters' motives and feelings in such a way that makes them relatable to the viewer. On the other hand, we can't help but despise the villagers who gang up against Marcus and Vaughn as they are portrayed as nasty and loathsome, even though their behavior may be seen as justified.

The final result is more than satisfying as we witness first-hand the emotional turbulence of the two main characters that develops into a full scale tragedy as the plot moves forward. The performances by all the members of the cast are solid with McCann and Curran leading the show. The setting is a perfect fit for the story and the photography is haunting, captivating the essence of the rustic landscape. Crime and the inevitable punishment is the main theme that dominates the film while there are some more interesting motifs explored such as the oppressing mentality of closed-knit community that imposes vigilantism instead of justice and the nature of friendship when tested under extreme circumstances. Calibre is one of the best choices in the current Netflix catalogue of movies and it's a title that will appeal to those who prefer realistic, character-oriented crime/thrillers which are based on fine performances and focus on the psychological state of the protagonists. 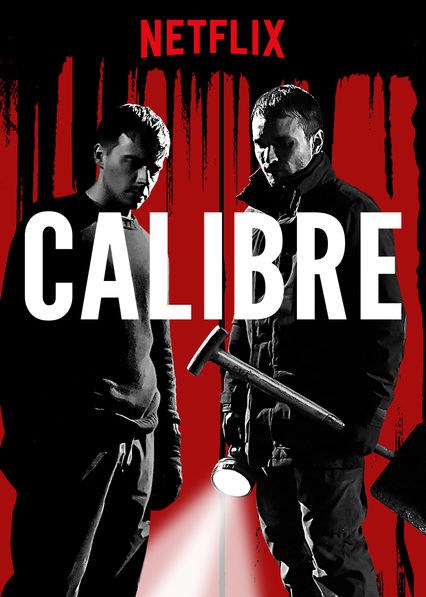