The last, and perhaps weakest, installment in the Reykjavik Noir trilogy by Lilja Sigurðardóttir. 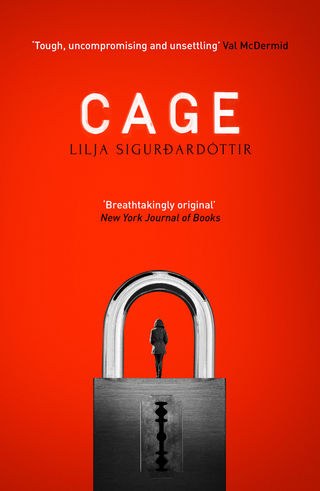 I have to admit that I held higher expectations for this novel as I truly loved the previous two books in the trilogy, Snare and Trap, but the final impressions are somehow mixed. One thing is for certain: Cage is a weaker novel than its two predecessors, though that cannot blemish my overall assessment of the fascinating "Reykjavik Noir" trilogy, one of the best coming from the land of fire and ice in the last few years. The author, Lilja Sigurðardóttir, is a young and talented novelist who has a lot to deliver in the years to come. Unfortunately, in Cage, it seems that she isn't in top form and I will try to explain why.

First of all, those who haven't read the previous two books in the trilogy, will find it rather difficult to follow the -many- character arcs as the main protagonists', who were introduced in both Snare and Trap, actions and thought process will make a lot more sense if you are already familiar with them. Then, the main storyline involving financial and corporate crime is not compelling enough for the reader to follow and, personally, I didn't care one bit for the final upshot. What kept me engaged in the book was the need to know where the, otherwise wonderfully crafted, characters would end up. It should be noted, for all those familiar with the trilogy, that in Cage the main protagonists are Agla and Maria, while Sonja -the protagonist in the superb Snare- plays a secondary role in the novel's plot. I have to admit that I felt a bit unsatisfied with the ending, but this is only my personal opinion. I expected a more dramatically satisfying finale.

The story is narrated through multiple perspectives and in short chapters, maintaining a solid, steady pace in which the plot unfolds and the prose is carefully crafted, at the same level as it was in the, by far, the best book in the series, Snare. Though I can unreservedly recommend the "Reykjavik Noir" trilogy to all Nordic noir fans around the world, I claim that the conclusive installment is rather feeble and anemic. I expect something better from the skilled Icelandic crime fiction author soon.