The beginning of a new collaboration. 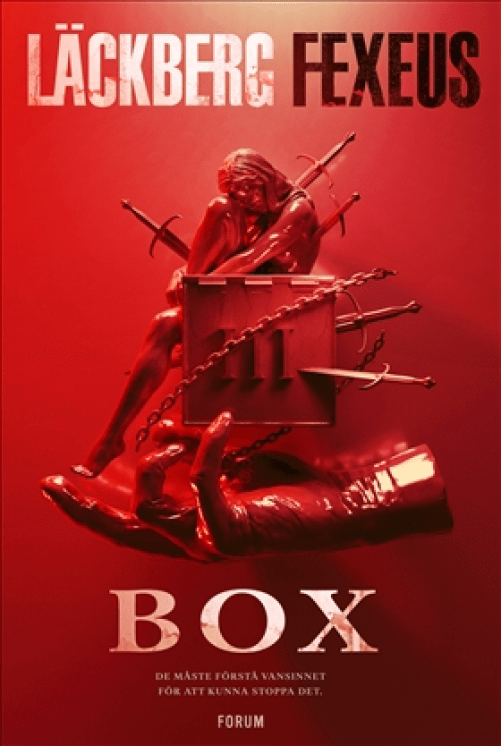 NOTE: I read this book in the Greek translation (title: Το Κουτί) by Aggeliki Natsi. The publisher is ΜΕΤΑΙΧΜΙΟ books. So far there is no English edition available for this title.

Box is a crime novel that signifies the beginning of a promising collaboration between Camilla Lackberg, the Swedish superstar author who is known for her Erica Falck series and several standalones, and Henrik Fexeus whose activity as a writer includes many psychology and self-help books. The result is an ambitious serial-killer thriller that aspires to be equal to those written by the masters of the genre such as Jo Nesbo and Arne Dahl. Even though this novel has its merits, there are some significant flaws that deem it a rather conventional and and generic work. The two authors attempt to combine elements from several different genres, nevertheless the outcome is a novel that cannot be strictly categorized by any fiction genre and conveys a sense of confusion to the reader who cannot evaluate this title by the normal standards. There are dashes of horror, suspense, family drama, and a bit of romance but each aspect is not smoothly incorporated into the whole, thus leaving the reader with a feeling of unevenness and asymmetry.

The story is narrated mainly in the present in a linear timeline while there are some limited interjected chapters that transport the reader to 1982 where we witness the everyday life of a dysfunctional family. The significance of the past timeline does not become apparent until the end when the reader can identify who is who and its impact on the main plotline. This is the first part of an intended trilogy featuring Vincent Walder, a spiritualist and magician who performs on stage introducing his audience to the art of illusion, and Mina Dabiri, a peculiar police investigator who leads a solitary life due to her extreme germaphobia that forces her to compulsively avoid any kind of social gatherings that could lead to her exposure in bugs and dirt. The two protagonists possess a weird chemistry that is developed throughout the novel and they seem to be a fit for one another as Vincent himself has his own mental challenges to address such as his obsession with even numbers.

The story sets off when the body of an unidentified young woman is found in a box used in magic performances. The victim bears severe injuries from several swords that have been administered through the box and Mina, who is one of the lead detectives on this case, approaches Vincent in order to learn more about the cryptic universe of mentalists. Initially reluctant, Vincent agrees to cooperate with the authorities as he is intrigued by Mina's persona and he arrives at the police station to brief the investigative team about the secrets of his art. Due to his obscure way of making a living, Vincent is not welcomed by the team and there are several officers who think that he is nothing more than a hoax, a man employing deception to extricate money from the naïve audiences. Nevertheless, as the story progresses Vincent proves to be an invaluable member of the team as his knowledge of the subject and his special insight into other people's thoughts help the investigation move forward. But as we reach the climax, the reader realizes that Vincent is more involved in the case than we imagine and that the killings are directly connected to him and his past.

The first murder is succeeded by others and the bodies pile up leaving Mina and her team feeling unable to keep up with the developments. Thus, Vincent's input is all the more necessary as he seems to notice things that the official investigation failed to assess. It is through his observations that the team makes some breakthroughs in the case and Mina seems to trust him unreservedly, especially as the plot ploughs forward. Lackberg and Fexeus attempt to build a special kind of romance between them but sometimes their efforts seem contrived and implausible with the two protagonists often engaging in awkward interactions and stilted dialogue. The main storyline, which revolves around the serial killings in Stockholm, is solid and perhaps the book would have a better chance if the writers steered clear of cliches and plot tropes that could have been avoided. For example, the sub-stories concerning the members of the police team such as Ruben and Peder seem almost irrelevant and add nothing to the main narrative.

The novel's opening scene is creepy enough to hook the reader and it is reminiscent of the first pages in Jo Nesbo's Harry Hole thriller, The Leopard, but the text's potency gradually diminishes and remains in shallow waters during the following chapters. I am not a big fan of Lackberg's previous work and I consider only one of her earlier novels to be worthy of praise, that is The Hidden Child. I always had hard time digesting her prose which is filled with redundant phrases and her narrative style that strives to be compatible with the great works of Nordic crime fiction. The Erica Falck series was a mediocre attempt to imitate the giants of the genre while her subsequent novels drifted away from crime fiction, focusing on themes such as feminism and women empowerment. The addition of Henrik Fexeus in the Box lessens the overall negative tone of her prose and his contribution is evident in Vincent's character who is a profound connoisseur of human psychology and also a brilliant mathematician. I've never read anything written by him, but I think that he is an author with great potential and he should seek a career as a crime fiction author.

To conclude, I have mixed impressions about the Box and I cannot heartily recommend it to the fans of Scandinavian crime fiction as there are several more well-rounded novels by the native crime authors. It is a rather dense and long read (more than 700 pages) so be braced for a long-drawn experience. I found the final revelation of the villain and the last part of the novel in general to be rather anti-climactic and I have correctly guessed the identity of the perpetrator from the middle of the novel. There is not much of a whodunit element as the characters, apart from the protagonists and the investigative team, are limited offering no possible culprits to pinpoint. I dare to say that this is a novel that is more intriguing than Lackberg's Erica Falck series, but this fact couldn't change my established evaluation of the Swedish author's writing skills. I am not sure that I will be reading the second installment in the series, but perhaps I am being biased and unfair when it comes to Lackberg. There are many fans of her work out there and maybe this book will appeal to them in a way that I cannot fathom or imagine. My review contains exclusively my opinions which are formed by my own personal taste. I want to wish Merry Christmas and a Happy New Year to all my readers!