A "blue story" is a game where a person, the narrator, tells a fragment of a mystery story and the other participants try to figure out the other pieces of the puzzle and how they fit in place. They have to do so by asking closed questions to the narrator that can only be answered by a "Yes" or "No". It's a fun game which reflects the fragmented narrative structure of the Blue Queen, a Greek crime film, directed by Alexandros Sipsidis who creates a Pulp-Fiction-like storyline that is narrated mainly through four different perspectives, each corresponding to one of the four protagonists of the movie. The audience watches the events that unfold during a specific amount of time from four different points of view and each time we discover something more about the story as there are plenty of twists and turns that radically change our own perception of what is happening on screen. The film features a nice cast of young Greek actors, such as Michalis Oikonomou, Raschmie Soukouli, and Giorgos Adamandiadis as well as some older ones like Dimitris Imellos and Themis Panou. Plus, there is Dimitris Kapetanakos, the actor that became famous by playing Alkis Massatos in Sotiris Tsafoulias's The Other Me: Lost Souls and its sequel, The Other Me: Catharsis.

The story begins with a heist scene where four thugs, working for a gangster called Angelos (Themis Panou), steal one of the most expensive diamonds in the world, the so-called "Blue Queen". After the robbery, the son of Angelos, Haris, is murdered and the perpetrator steals the invaluable diamond. Giannis (Michalis Oikonomou), one of Angelos's goons, is quickly suspected of having betrayed his boss and finds himself in a terrible predicament. His girlfriend, Lena (Raschmie Soukouli), is the mastermind behind Giannis's betrayal and she convinces him to keep his cool and get on with the initial plan that involves another shady character, a middle-aged man, Stavros (Dimtris Imellos). Nevertheless, Stavros has his own plan worked out and he seems to be unwilling to share the diamond with anyone. At the same time another man from Angelos's gang, Nikos (Giorgos Adamandiadis), has his own agenda and he has also collided with an unknown individual in order to get the diamond in their hands.

Giannis, Lena, Stavros, and Nikos are all driven by their excessive greed, some more than the others. The protagonists in the Blue Queen are reminiscent of those in several of Quentin Tarantino's films and the characterization adopts some of the most cliched patterns in the genre. There is the heartless femme fatale, the relentless mobster, the unforgiving crime boss, etc. Nevertheless, the quick tempo and the many plausible plot twists make Blue Queen an easy film to watch even if it's not the production that you will remember for a long time after the ending credits roll. I would like to mention Raschmie Soukouli's exceptional performance as the aforementioned femme fatale, Lena, that constitutes the number one reason to watch this movie. Soukouli is a multi-talented actress, director, singer, and artist who has only appeared in a limited number of feature films and television series. Her talent equals her looks and her magnetic appearance on screen always succeeds in capturing the audience's attention. As a Greek and a loyal crime fiction fanatic, I would urge the native producers to make more attempts at creating similar movies as there is a lack of decent productions in Greece during the last few years. I can only hope for the best. 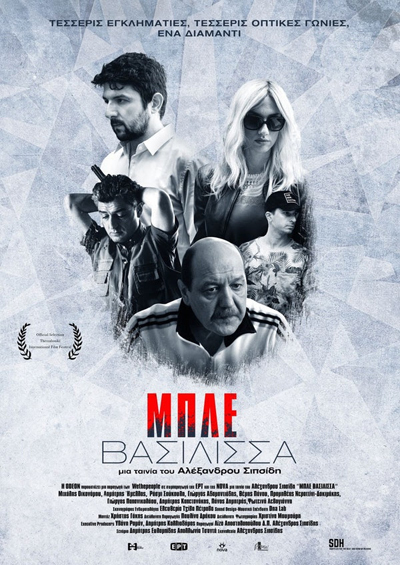