A worthy representative of a legendary Norwegian crime novel series. 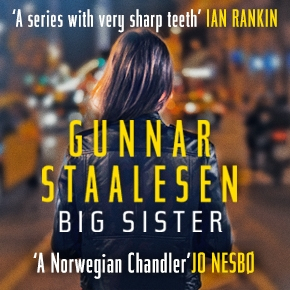 Gunnar Staalesen is one of the most successful Scandinavian crime fiction writers, and the creator of a legendary main character, Varg Veum. Big Sister is the twentieth (!) installment in the series which began in 1977 (Das Haus mit der grünen Tür) and Varg is now sixty-one years old while he is trying to solve a possible crime when a young college girl goes missing and nobody seems to know her whereabouts. This particular case has a more ''personal'' angle for Varg as his client is his estranged half-sister (from the same mother) who he never met. The novel retains a not-too-fast and not-too-slow pace, typical of Stallesen's style, and his superb descriptions make, as always, his novels an absorbing and fascinating read. In Big Sister, Varg is going to face some tough revelations about his family and he will doubt, for the first time, things that were certain till now. The central storyline is interesting, though unoriginal, enough and the ending is satisfying but Gunnar Staalesen's novels are distinguished from the mainstream crime fiction by their quality prose which guarantees a truly enjoyable reading experience.