A study on family dynamics by Fiona Neil. 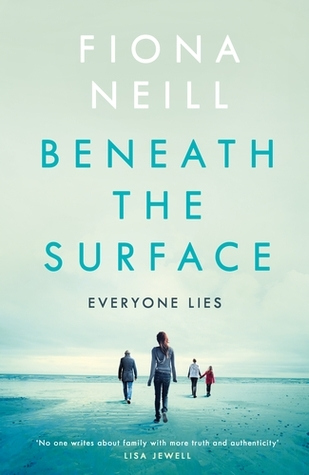 This novel is a truly well-written account of dysfunctional; familial relationships and their consequences for each member. Beneath the Surface is a book resistant to a single genre categorization as it is partly a crime fiction novel as well as a social commentary and family drama based on the -many- secrets and lies that lie at the core of disrupted parent-children relationships.

The four main characters are all the members of the Vermuyden family originally living in Cambridge and now relocated somewhere on the edge of the Fens. The story sets off when 10-year old Mia finds a well-hidden positive pregnancy test in the garage of their new household. Mia's older sister, Lilly, tells her that the test belongs to her and urge her kid sister to keep quiet about it as her parents, Grace, and Patrick. Grace is a strict, demanding mother with a troubled past which she managed to keep secret from her own family and Patrick is a quiet man who, nevertheless, has a few problems of his own. Things will escalate when Lilly suffers a seizure in her school that sends her to the hospital for nearly a month. Grace will soon realize that her daughter is living a kind of double life which is also the reason behind her illness. There are bits of information scattered on the text concerning the Anglo-Saxon history and the role of the -pregnant- women in that era. Furthermore, the author inserts the hint of supernatural involvement in the plot, adding to the mystery.

Neil adopts a mixed third-person narrative style as we witness each character's thoughts on the same chapter alternately. The pace of this novel is a bit slow but the reader never feels bored as Fiona Neil's prose is excellent and there are a lot of stimulating insights on the thought process of the protagonists which help us to identify more easily with the characters. The secrets and lies that torment them are revealed gradually and only in the redemptive and highly-satisfying, finale we can see the whole picture and understand the characters' struggle. In a way, the main protagonist is Grace as it is her character that carries the most hideous personal history, marked by a lack of love by her mother and the loss of her little brother, but Lilly is equally important as it is her who seems to know the most about her parent's secrets.

This is not your typical crime novel and you should be warned that Beneath the Surface is a character-oriented book that is not focused on its strong plotline but rather on the interaction between the members of the Vermuyden family. It is a sad story but in the end, there is perhaps a glimpse of hope for Grace and her daughters, as they seem to reach the long-awaited atonement. I would recommend it to all fans of literary crime fiction who enjoy books written by Stuart Turton and Kate Atkinson and also to those who love reading a well-written fiction novel.