Before the Devil Knows You're Dead

"Nobody gets hurt, everybody wins".

This is one of Sidney Lumet's most bleak films, a family tragedy that denies any chance of redemption for its main characters. Before the Devil Knows You're Dead features an all-star cast with Philip Seymour Hoffman, Ethan Hawke, Albert Finney, and Marisa Tomei, all delivering memorable performances. The story is about two brothers, Andy (P. S. Hoffman) and Hank (E. Hawke), who are both in desperate need of money for different reasons. Andy has embezzled money from the real state agency he works for while Hank is an unemployed loser who struggles to pay the child support for his daughter. Andy hatches a plan to rob their parents' jewelry store, a simple and easy heist that will bail out both him and his brother. But unfortunately, everything goes wrong on the day of the robbery and the result is the fatal injury of their mother who was in the store, although she wasn't even supposed to be there on that day. Hank who is reluctant about his ability to carry out the deed, pays a friend of his to knock off the jewelry store and he is also shot dead by the mother who kept a gun in one of the drawers. Thus, the botched holdup results in two deaths.

This is a movie dealing primarily with family relationship dynamics which unfold during the aftermath of the mother's death and the audience learns more about the characters through their interactions. The dialogue is great and adds to the complexity and truthfulness of the protagonists while the narrative jumps back and forth in time, the center being the day of the robbery. Sidney Lumet is an experienced and skilled auteur who knows how to handle such a distorted timeline and the audience never gets confused over when happens something. In the days after the unsuccessful heist, the lives of both brothers start to crumble at a rapid pace and it is not surprising that the film concludes with an outbreak of senseless violence by two people who believe that they've lost everything that gave meaning in their lives. The final scene is unexpected and shocking with Albert Finney, who plays the father of the family, giving a lesson in acting.

Before the Devil Knows You're Dead is not an easy-to-watch movie as its theme is quite disturbing and the characters are portrayed with the emphasis on their weaknesses and vices, thus making it hard for the audience to empathize or identify with them. The film's overall mood and tone are pessimistic and no one is able to find happiness or meaning in its universe. Even though there are plenty of dramatic, tense sequences, the best being Philip Seymour Hoffman's meltdown in his car after being slapped by his father, Lumet avoids moral didacticism and leaves to the audience the burden of judging the characters. I think that this movie is one of Lumet's best crime films and at the same time his most underrated work as far as the critical appraise is concerned. If you want a light crime flick full of action sequences and a happy ending, then this is definitely not the movie you're looking for while if you are searching for a character-driven family drama that uses crime as its central narrative device then you ought to give Before the Devil Knows You're Dead a try. 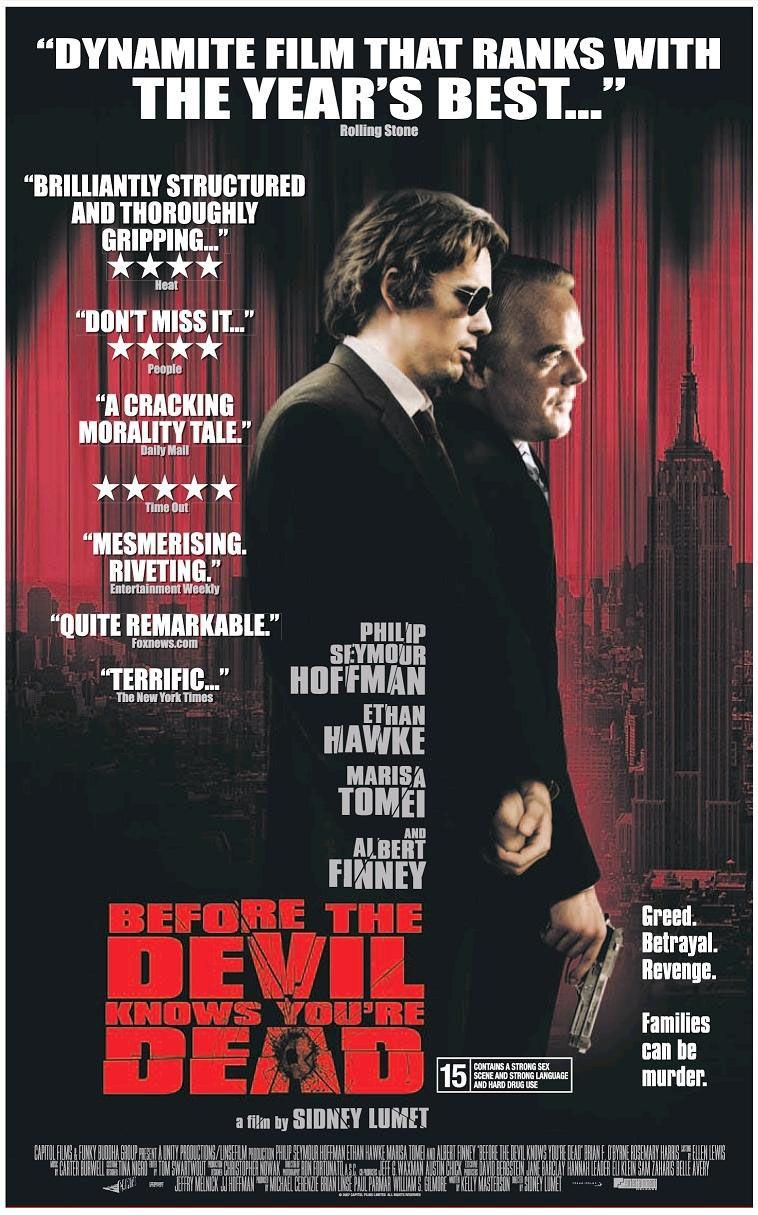 Before the Devil Knows You're Dead