The scent of rotten apples. 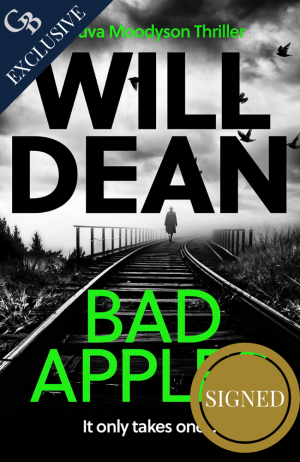 Will Dean's vivid imagination has delivered two major gifts to all Scandinavian crime fiction fans: the character of Tuva Moodyson and the fictitious town of Gavrik. In the previous three installments of the series we followed the steps of Tuva as she struggled to solve intriguing puzzles on her capacity as a journalist in a small local newspaper of Gavrik. Her stubbornness as well as her uncanny ability to work her way through impossible situations always helped her to pinpoint the villain, even if that meant that she would have to put her own life at risk.

Tuva and Gavrik are a volatile combination as the tiny town located in the northernmost of Sweden is not what one can call a friendly place. The sheer weirdness of its inhabitants makes Tuva's life even more difficult, especially when she has to interact with the town folk in order to extract crucial information for her investigations. Her hearing deficiency doesn't make things any better and the dialogue crafted by the author is often hilarious as there is a lot of confusion and misunderstanding occurring whenever Tuva has a chat.

Dean is an eloquent writer and apart from the unique characterization that makes the series stand out, the reader gets the chance to relish his staccato prose, the exemplary use of simile, the distinctness in the descriptive parts, and the iron-clad plotline which unfolds in a measured, natural pacing. The mystery is ever-present and there is a strong whodunit element in all the novels in the series, while the graphically described crimes are often gruesome and disturbing. There is also a dash of horror as the oddness of some of the characters is such that they feel creepy.

The story kicks off when Tuva discovers the body of a decapitated man on Visberg hill. The man is soon identified as Arne Persson, a plumber who lived in the close-knit community of Visberg where strange things seem to be happening. As the first person on scene, Tuva begins her investigations and dives into the closed society to learn more about the victim and the possible culprit. In order to do so, she will have to clash with a prominent, wealthy family of Visberg and uncover grotesque ritualistic practices that attract the locals.

Bad Apples continues in the same vein of its predecessors, even though I found this one to be a bit scarier than the previous volumes. The part describing the "Pan Night" was truly horrific and the suspense build-up is more intense. As always in Dean's novels, I couldn't find the villain and the ending was totally unforeseen. For those who are fan of the series, the author makes some references to the heroine's family history and we get to know Tuva a bit better. The supporting crew is also present, with Tammy, Tuva's colleagues, Noora and all the secondary characters that we learned to love through Tuva's prior adventures.

This novel is a necessary addition to your TBR list, especially if you are familiar with the characters and the setting. It is one of Dean's best so far and it will most appeal to Swedish crime fiction aficionados. Keep in mind that Dean has published standalone novels as well such as the heartbreaking The Last Thing to Burn, a distressing story about an imprisoned woman fighting for her freedom. I wonder what the English author has in store for the fifth installment in the saga. I hope that it will be equally captivating.