This is one of Thomas Vinterberg's most humane and moving films so far as it is basically a story about the troubles of aging and the life-affirmative strength that is required in order for a man to overcome an existential crisis. It's a movie that possesses all the merits of a masterpiece, a slow-paced comedy/drama that doesn't dwell on social issues and abnormalities, but rather focuses on the characters, the human beings that struggle to find meaning to fill the void of their everyday life. Many reviewers wrote that the film is a celebration of the Danish alcohol culture, but I assure you that nothing could be further from the truth. Alcohol consumption is a means to an end for Vinterberg who is careful enough not to allow any kind of moral or social criticism to emanate from his work. The experienced Danish auteur, who also collaborated in the writing of the script along with Tobias Lindholm, is the man responsible for the bittersweet atmosphere that pervades the movie and the internal buildup that reaches an explosive climax in the final scene. The last five minutes of the film belong to an anthology of the best scenes ever filmed and reflect its true essence as they can be seen as an audiovisual ode to the phenomenon of life with no strings attached. I've watched a great number of films during the last decade, both originating from Europe and the U.S, but I cannot recall a single scene instigating the torrent of feelings that ran through me in the final scene.

Mads Mikkelsen delivers an unforgettable performance as Martin, a middle-aged high-school professor who leads a rather tedious life and has become estranged from his closest ones. His friends, Tommy (Thomas Bo Larsen), Peter (Lars Ranthe), and Nikolaj (Magnus Millang), convince him to participate in an experiment that is meant to test the validity of a philosophical theory that states that humans are born with half a per mille too little alcohol in their bloodstream. So, what would happen if a person made sure that the alcohol level in his blood remained always above the aforementioned level? Is it true that the consumption of alcoholic beverages expands the human mind and makes them more open to the world around them? As the four friends begin the trial stage, things seem to improve in both their professional and personal lives. Nevertheless, as they delve deeper into an alcohol-induced haze, they realize that certain boundaries have to be respected and that excess can lead to some major, undesired effects. They will find out that the crash is inevitable and its consequences hard to face.

Martin is the main protagonist, though we witness the effects that the odd experiment has on the lives of all three professors. In the beginning, they become more engaged with their work and get closer to their students who also enjoy drinking. The screenwriters make many references to significant historical figures such as the British Prime Minister, Winston Churchill, who used to drink every day and further enhance the intoxication by using sleeping pills. There is also Ernest Hemingway, an alcoholic novelist who committed suicide as a result of his depression in 1961. Martin as a history teacher refers to them as men of excess who nevertheless succeeded in leaving their mark in the world. Everything seems to go smoothly until the gang of four decides that it's time to test the limits of the drinking experience by consuming a vast amount of alcohol in order to observe the possible negative effects of the deed. The fallout is devastating, especially for Martin and Tommy whose lives are upended.

The magic of the movie's script though moves forward as the final thirty minutes of Another Round follow the protagonists after the failed experiment and the audience witnesses what happens then. What follows is not the usual condemnation of their previous socially unacceptable behavior, but a portrayal of them growing wiser and more mature as the movie reaches its ending. Vinterberg and Lindholm know both how to create three-dimensional, human-like characters and provoke the audience's feelings through their witty, meticulous writing. The relationships between the characters are at the epicenter of the movie and there are many moments where we see them interact and expose their innermost thoughts as they gradually become inebriated. Alcohol is a character in itself, though it is not demonized in any way. It's up to us to use it in good measure and enjoy the moments it has to offer. The creators of the film draw a distinction between use and abuse, leaving the audience to decide on the ethical issues that arise. It is rare to watch movies that don't adopt a certain view on their subjects and this is one of the best examples.

It should be mentioned that the movie won the 2021 Oscar Award for Best International Feature Film and Vinterberg was nominated for Best Achievement in Directing. Another Round is a memorable viewing experience and it is a film that will make you think further about the desperate human quest for meaning in their lives. Though many will think that the characters follow a rather unorthodox route in order to surpass their personal impasse, the film's boldness and honesty deem them deeply human and relatable, thus making them instantly likable. The first half is filled with comical scenes that portray the protagonists functioning in a state of semi-drunkness and the result is hilarious. I had many good laughs during the first part, but it is crucial to comprehend that it also sets the scene for the more somber second one. The final part of the movie is a hymn to life and the last scene with the students' graduation will be burned into your retinas forever. In my opinion, this film along with the 1998 classic, Festen, is Vinterberg's most compelling work to date and it is recommendable to all lovers of high-quality filmmaking. 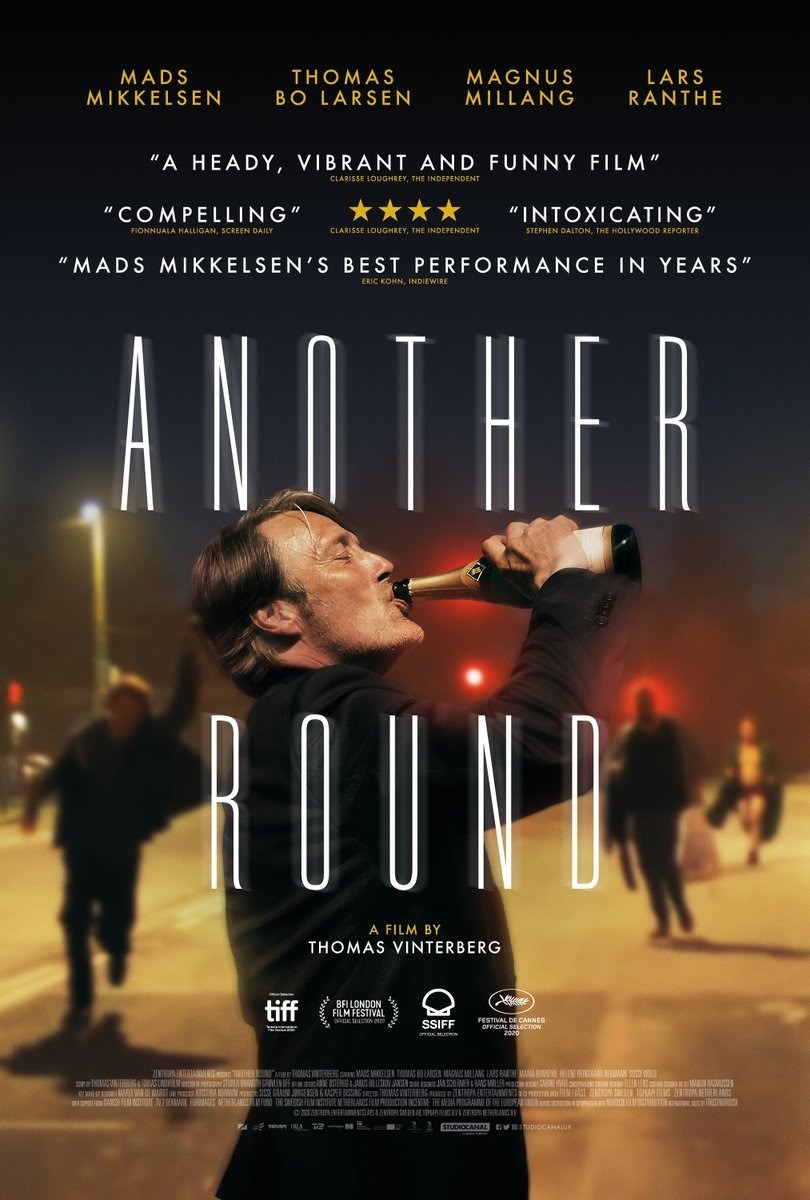