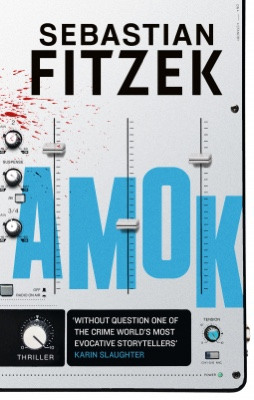 Jan May is a certified psychotherapist whose life was turned upside down eight months ago when his beloved girlfriend, Leoni, allegedly died in a car accident. Convinced that Leoni is still alive and having nothing left to lose, Jan storms into the premises of one of Berlin's most prominent radio stations and takes several people hostage. Distorting the rules of a popular game, Cash Call, he declares that he will call a random number in the city every hour and if the person who picks up the phone doesn't respond with a specific slogan, he will shoot one of the hostages. His only demand is to see Leoni once again, even if she is officially considered to be deceased. Jan's radical transformation from a peaceful, law-abiding citizen into a terrorist determined to kill stems from his unwavering belief that he is the victim of a huge conspiracy involving people high up in the judicial hierarchy.

Ira Samin is a criminal psychologist and hostage negotiator working for the police and the reader is introduced to her character as she wakes up one day hellbent on taking her own life. Ira is still mourning the death of her daughter, Sara, who committed suicide and is one the verge of swallowing poison when a colleague and ex-lover, Gotz, traces her and asks her to help with the situation in Radio 101 point 5. As Ira makes her first attempts to contact and establish rapport with Jan, she begins to suspect that perhaps there is some percentage of truth in his wild speculations and accusations. Soon, Ira and some of her most trusted comrades start investigating the circumstances surrounding Leoni's death and they find many holes in the official explanation of the accident. At the same time, Ira finds herself more personally involved in the hostage situation as one of the victims is her other daughter, Katharina or Kitty.

Amok is a bumpy ride of a thriller and the story has so many twists that ends up being over-the-top and implausible. Readers who are familiar with Fitzek's novels will recognize the author's tradermark writing style and multi-layered plotting which is often perceived as overly complex and unnecessarily convoluted. What begins as a claustrophobic, tense narrative quickly disintegrates into a roller-coaster of quirky surprises and unexpected revelations, supposed to keep the reader's attention fixed to the pages. Unfortunately, the repetition of cliched tropes deems the novel conventional and the sloppiness in characterization and dialogue does nothing to mitigate that impression. We are supposed to empathize with both Ira and Jan, but their backstories are relayed in such a way that they resemble more like riddles than a character's background information. The German author heavily relies on the spin factor to keep the suspense alive, but fails to deliver in almost every other aspect of a a decent crime/thriller novel. Recommended only to Fitzek's hardcore fans.