In 1979, Ridley Scott directed a film that would remain in the history of the medium as one of the most engrossing science fiction/horror classics ever made. Alien is, above all, a lesson taught on how to build suspense masterfully by creating a dark, cold atmosphere and an ominous sense of foreboding that dominates the movie's first half, while at the same time featuring a captivating main storyline in which the crew members of a space merchant vessel have to fight for their lives when an unknown entity attacks them one by one. The Alien, a species designed by the great Swiss surrealist H. R. Giger and its layout originating in a lithograph titled Necronom IV, is the incarnation of the sinister external threat that doesn't abide by any human moral code and its structural perfection is matched only by its hostility. There is a strong philosophical aspect attached into the movie's plot and the audience is left brooding, after the end of the film, about the limits of human knowledge, the infinite number of things that remain an enigma for us, and how defenceless we truly are when facing the vast openness of the universe.

The cast consists of several popular American thespians and their ample performances support the film's somber mood that reaches its climax in the second half. Sigourney Weaver shines as Ripley, the most unflappable and cool-headed member of the crew who becomes the indisputable protagonist as the story evolves and the alien digs its way deep into the spaceship. John Hurt is fabulous, as always, as Kane, one of the most introverted main characters who unwillingly becomes the vessel for the alien to be born. Ian Holm is worthy of a special mention as his portrayal of Ash, the scientist who is responsible for the study of extraterrestrial beings, is monumental and his character's development one of the most exemplary I've ever witnessed in the silver screen. Tom Skeritt, Veronica Cartwright, and Harry Dean Stanton deliver stark performances as the rest of the crew, while Bolaji Badejo, the Nigerian actor who died in 1992, plays the alien due to his height and long limbs.

The story begins when the members of the Nostromo commercial spaceship, on their way back to earth, receive a mysterious signal that suggests that some form of life is transmitting a distress call. Obliged to make further research, they descend on a moon-like planet and a group of three leave the vessel in order to trace the source of the signal. As they explore the lunar landscape, Kane discovers a hive of eggs and when he attempts to disturb one of them, an octopus-like creature attacks him and gets stuck on his face. Immediately, the remaining two members transfer Kane back to the spaceship to find out what's wrong with him. When Ash examines Kane, he tells the crew that he is alive but the facehugger is still there. When the strange entity gets off Kane, the crew will think that the nightmare is over, but the truth is that it had only begun.

Even though, Alien is the definition of a sci-fi movie, the element of horror is strongly present from the first minute of the film's runtime. It's not so much about the alien attacking and obliterating the members of the vessel's crew, but about the irresistible suspense that is emanated through the movie's superb pacing and gradual revelation of crucial plot points. Of course, alien is a terrifying creature and its grotesque shape and appearance shock the audience, nevertheless, I found that the eerie, unnerving tone of the film's first half and its overall suspenseful internal rhythm make Alien stand out as a classical masterpiece. I've rarely watched a movie conveying such an enchanting, claustrophobic atmosphere, even though it takes place in the most open-ended and expanseful setting imaginable. Chronologically, the story takes place in the distant future, an epoch for which the audience ignores its standards and that adds up to the setting's mystery.

Scott's skills as a director are unquestionable and proven beyond the shadow of a doubt in a number of feature film productions, though I think that Alien is definitely his magnum opus, perhaps along with Blade Runner. The words "haunting" and "disturbing" fail to describe the movie's effect to the viewer and there are plenty of scenes that you will find hard to forget. The legendary chestbusting scene in which the alien erupts from Kane's torso was not filmed in one take, as rumored, but in two as in the first one the chestbuster didn't make it through John Hurt's shirt. The mechanical torso that was used, "was packed with compressed air and animal guts", causing the setting to smell horribly as Sigourney Weaver said afterwards. The facehugger "was made using fresh shellfish, four oysters, and a sheep kidney to re-create the internal organs". It was initially planned to be painted green but when Dan O'Bannon saw its human-like color decided against it. (IMDB Trivia)

Alien is Ridley Scott's tour de force and one of the best movies ever produced set in the space. It will keep you on the edge of your seat, no matter how many years before it was filmed. I've never encountered such a spectacular blend of horror and suspense in a feature film, while its unique optics deem it an unforgettable watching experience. If you haven't still checked it out, then now is the time as there are few movies that will capture your attention and imagination in such an utter manner. It should also be noted that it won the Oscar for Best Visual Effects (1980) and it was nominated for Best Art Direction- Set Decoration in the same year. IMDB lists Alien as #52 in its Top Rated Movies list. 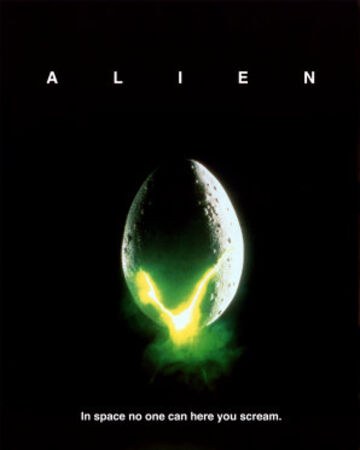