The difference between being a policeman and a cop.

As a devoted fan of Scandinavian crime fiction, I try to stay in touch with the latest novels, movies and television series of the genre, something rather hard as the productions are numerous, some of them mediocre and some great. Alex belongs to the second category and I think that, along with Innan Vi Dor (2017), it is the best that the Nordic Noir genre has to offer in television productions for the last two years.

The story is set in Gothenburg and revolves around Alex Leko, a hard-boiled, corrupt cop who finds himself in an ugly mess after he accidentally shoots his colleague and close friend, Martin. Alex's situation soon becomes even worse when he clashes with a prime thug nicknamed BG and his son is kidnapped. The protagonist will have to take the matter in his own hands and find his son in a race against odds and time. The plot moves forward at a frenetic pace and the tension rises in each episode leading to the climax of the last two episodes. The twists are plausible and satisfying, especially the big one at the ending of episode 5, while the charged relationships between the main characters provide many great dialogue scenes. Special mention should go to the two directors of the series, Manuel Concha and Alain Darborg who certainly know how to use the camera to successfully depict the protagonist's anguish, anger, and despair which will result in extreme acts of brutality on his part. The action and fighting sequences are exemplary, as the viewer can feel the tension of the tough situations that the protagonist is drawn into.

Dragomir Mrcic is a Yugoslavian (Bosnian) ex-con, who did 3 and a half years in prison for his involvement in a bank robbery in Sweden. He became famous for his compelling portrayal of Mrado in Daniel Espinosa's Snabba Cash, a film based on the titular, prominent in Sweden, novel by Jens Lapidus. The roles of Mrado and Alex are quite similar and Mrsic nails the role once again, being constantly enraged and on the edge, using his fists and martial arts knowledge in his interactions with the others. The rest of the cast is also decent, with Anja Lundqvist being wonderful in her role as Kim, Alex's spouse. Malin Arvidsson, known for her role as Kerstin Holm in the Arne Dahl series, also has a small part as Martin's wife, Sheila. Overall, I was more than satisfied by Alex and I recommend it without any reservation to all crime fiction fans. 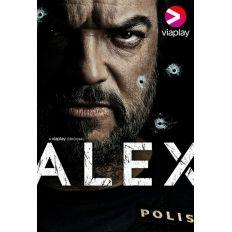