An easy to read crime/mystery but nothing more. 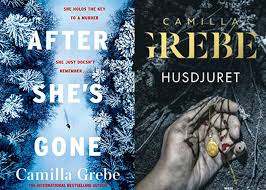 This is the second installment in the Flickorna och mörkret Series written by the Swedish crime fiction author Camilla Grebe, who along with her sister -a crime fiction author as well-, Åsa Träff, are considered to be two promising new additions to the ever-growing Nordic Noir genre. The previous book, titled The Ice Beneath Her was a solid Scandi-crime novel that could be compared with the work of the most popular authors of the genre, but this one was a bit weaker and when I finished its reading I couldn't help but feeling that something vital was missing. Nevertheless, it should be noted that this novel was awarded the prestigious Glass Key Award for 2018.

In After She's Gone we meet again some of the main characters that we were introduced to in the first book, mainly Peter and Hanne, who find themselves in an impossible situation which begins when Hanne, who suffers from some kind of early-onset dementia, is found barefoot, half-naked, and in a state of total confusion in a forest near the village of Ormberg where she along with her lover, the middle-aged detective Peter, was investigating a case of homicide which seems to be linked with another murder in the same area, that was committed some years before.

The story is narrated by multiple points of view, but mainly through the two main characters in this book, Malin and Jake, a 15-year old crossdresser who happens to be in the wrong place at the wrong time. As it is usual in the novels of the genre, the narration follows a steady tempo, slowly revealing the answer to the mystery, but the overall result seems to be a little bit forced and uninspired. Perhaps the first book set the standards too high, but the truth is that I was expecting something more elaborate and innovative by C. Grebe. I can only hope that this will be the case in the next novel in the series.