A Stranger from the Storm 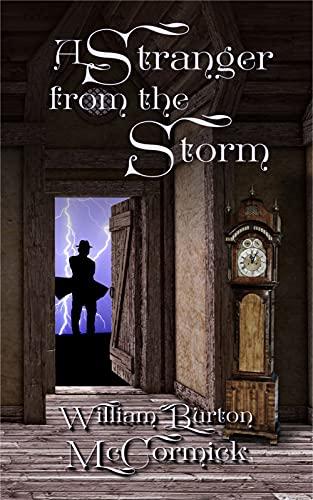 A true nomad of a writer, William Burton McCormick has lived in several European countries such as Ukraine, Latvia, Russia and the United Kingdom for the sole purpose of collecting the necessary impressions and images that embroider his writing. McCormick is a member of the highly esteemed Crime Writers Association as well as the Mystery Writers of America and his work includes numerous novels, novellas and short stories published in reputable crime fiction magazines such as Ellery Queen's Mystery Magazine, Alfred Hitchcock's Mystery Magazine, Black Mask and more. His writing style exhibits influences from the classic gothic horror tales and the accurate representation of long gone eras deems him a singular talent who grasps the importance of a strong sense of place and time.

A Stranger from the Storm is McCormick's latest novella that is going to be published on November 4th by the indie publisher Mannison Press. It is an imposing horror story also featuring elements from other genres and the final result is a short, dense read that grounds the reader and offers him pure entertainment and excitement. The story is set in Odessa, one of the biggest cities in Ukraine, and the year is 1900, the beginning of the twentieth century. The town is terrorized by the atrocious deeds of a child killer, nicknamed The Specter, and the citizens live under constant fear as the perpetrator is still at large. The author chooses to present two teenage girls as the main protagonists, thus depicting the story through the eyes of children who are not entirely grown up yet and their actions are often characterized by immaturity and hastiness.

Tasia and Eleni Karadopoulina are two twins living in the Greek Quarter of Odessa and run a boarding house along with their mother who is struggling to make ends meet. When a mysterious tenant, Henry Humble, arrives, a man bearing a disgusting scar in his face, the two sisters will begin to speculate about his obscure comings and goings, so they soon find themselves watching him closely as he may even be the notorious Specter, the man wreaking havoc in the city's streets since the last few months. With the help of Eleni's boyfriend, a young police officer named Spiro, they will put Henry Humble under strict surveillance in order to learn his secrets. As the plot moves forward, Eleni and Tasia will delve into an adventure in which they will only have each other to hold on to.

The book's main perk is its mesmerizing atmosphere that grabs the reader by the throat from the first few pages when Humble makes his entrance as the titular Stranger from the Storm. His abrupt, borderline rude, behavior makes him instantly despisable to both the two sisters and his weird habits puts him under the microscope of Eleni, Tasia, and Spiro who team up in order to get to the bottom of their obnoxious tenant's case. The descriptions of the city of Odessa are brief, nevertheless haunting and provide the best backdrop for the eerie story to unfold. The author certainly did his research regarding the everyday reality of living in this city at that time and its image is painted with brushes of dark colors, perfectly fitting the text's overall mood.

It is a rather quick read and you can easily devour it in just one sitting, as I did, and it was a real change to read a different kind of novella, counting on its clear prose, well-rounded characters, and skillful description of a city lost in time. McCormick is certainly an author to look out for and he has also recently published an international thriller, The KGB Banker. which has won critical acclaim and is out since September 10th. I want to thank him from the bottom of my heart for contacting me and giving me the opportunity to write an honest review of this title. I will have to make sure to add his name in my favorite authors list and I can't wait to relish more of his work. A Stranger from the Storm is the book that you want to read in a gloomy winter's night with a glass of scotch nearby. Try it and you won't regret it.

A Stranger from the Storm