A heart-rending story about parenthood and loss in today's Copenhagen.

This is a really sad film, directed by one of the most prominent female Danish directors, Susanne Bier (Brothers, The Night Manager, In a Better World) and starring an all-star cast with names such as Ulrich Thomsen, Nikolaj Lie Kaas and Nikolaj Coster-Waldau. There is also a brief appearance by Peter Haber, known mainly from the legendary Beck television series and the cinema adaptation of the first Stieg Larsson's novel in the Millenium trilogy (The Girl With the Dragon Tattoo). The story revolves around Andreas (Coster-Waldau), a police officer who is facing a tragedy in his personal life as he loses first his infant son in an accident and after awhile his wife commits suicide leaving him alone and desperate. Andreas will kidnap the son of a junkie couple and in a way, try to replace his dead offspring with the, neglected by his real parents, baby.

This film is a slow-burner which retains its suspense and interest as far as the main abduction plotline is concerned, but emphasizes on the characters' emotions and reactions, specifically focusing on Andreas tormented soul and the viewer finally empathizes and identifies with a baby kidnapper, a difficult achievement for a crime film. Susanne Bier is an experienced and talented auteur who prompts the audience to ponder on the film's main themes, that is the question of what really is a good parent and the nature of grief as well as its dire consequences to the human beings. This is a film that will appeal mainly to European audiences and it is nothing like the typical films of the crime genre that the American audiences -mainly- are used to. So, if you are expecting tons of actions or high levels of suspense, better skip it. If, on the other hand, you believe that entertainment is something more than mere enjoyment, try to watch A Second Chance (original -Danish- title: En chance til) pronto. 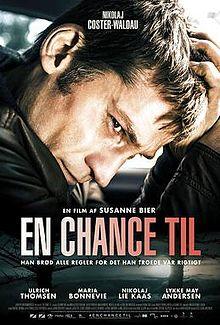