A Passion for Books: A Book Lover's Treasury of Stories, Essays, Humor, Love and Lists on Collecting, Reading, Borrowing, Lending, Caring for, and Appreciating Book

A treasure chest of a collection for every booklover. 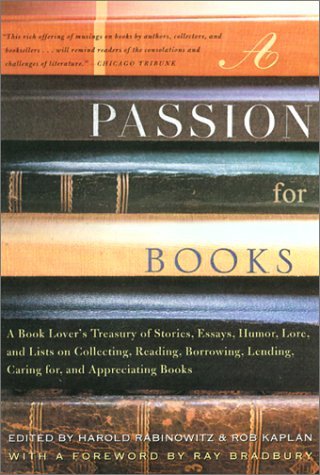 "All the glory of the world would be buried in oblivion, unless God had provided mortals with the remedy of books". (Richard de Burry, Philobiblon)

"Who kills a man kills a reasonable creature, God's image; but he who destroys a good book, kills reason itself, kills the image of God as it were in the eye". (John Milton, Areopagitica)

Edited by Harold Rabinowitz and Rob Kaplan, a duo that also collaborated in another hymn to the love of written speech, Speaking of Books: The Best Things Ever Said About Books and Book Collecting (2001/Crown Publishing), A Passion for Books is a versatile collection containing the widest variety of entries imaginable in terms of literary form as in the book we can find several dozens of essays, lists, poems, quotations and whatever else comes in mind. It is evident that the editors of this volume are fervent book readers themselves and their passion reflects on their careful selection of a series of features, always concentrating on the necessity and cultural significance of books and reading, penned by some of the most predominant figures in the global literary canon and spanning the timeframe of multiple centuries. From the 14-th century Italian scholar and poet of early Renaissance, Francesco Petrarca (known in the English-speaking world as Petrarch) to contemporary intellectual giants in the likes of Umberto Eco and Philip Roth, this collection fills the reader with information about every aspect of the literary process and the diversity in the type of the articles featured as well as their short length make for an easy and fast-paced read, ideal for those who have an allergy for long-winded, fully-fleshed essays that can become tedious in some circumstances. As it is expected, not all chapters are equally compelling, but I found none to be utterly pointless or feeling out of place with the overall context of this title.

Beginning with a foreword by the author of the legendary Fahrenheit 451, Ray Bradbury, a book zealot who, apart from his novels that marked American literature in the twentieth century, also authored short stories, poems and, most interestingly, many pieces on the work of other authors, most notably those who influenced his own writing. Such examples are the poets Yeats, Keats, and Shelley as well as more modern novel writers such as Edgar Alan Poe and Herman Melville. What left me feeling dumbfounded was the fact that Bradbury managed to write Fahrenheit 451, which was his first complete fictional story published after an initial fix-up novel with the title The Martian Chronicles, in just 9 days (!), while working in a typing room underneath the library in the UCLA camp. Bradbury stresses the importance of working in proximity with an abundance of books and confesses how often he travelled upstairs to load his mind and imagination by reading the work of other great writers. He characteristically declares that "the library turned out to be the best damn maternity hospital in my entire life", keeping in mind that the "children" implied comprise the totality of his body of work. In the parting lines of this short preface, Bradbury leaves the readers with a note of grandeur as he writes: "The Egyptians often, in death, had their favorite cats embalmed, to cozen their feet. If things go well, my special pets will pace me into eternity, Shakespeare as pillow, Pope at one elbow, Yeats at the other, and Shaw to warm my toes. Good company for far travelling".

The collection furthermore contains two short essays written by the Italian philosopher and intellectual, author of the iconic Name of the Rose and Foucault's Pendulum, Umberto Eco. The first one is titled "How to Justify a Private Library", a short piece about the banality of the obvious and the triteness of having the same question asked over and over, namely if he has read all the books in his -vast-library. While getting vexed by such queries, Eco discloses to the reader the ways that he devised in order to cope, and they are sprinkled with humor, albeit of a more cerebral kind. Eco also mentions the first time that he met Erving Goffman, one of the most predominant figures in 20th century microsociology. The Italian semiotician commends Goffman on his sharp intellect and seems to hold him in great respect, namely due to the "genius and penetration with which he could identify infinitesimal aspects of behavior that had previously eluded everyone else". Eco's second essay, "How to Organize a Public Library", adheres to a stricter form and includes strict, terse guidance to library managers and staff on how to properly and more efficiently regulate and systematize the infinite variety of books. Even though Eco makes some valid points regarding the essay's subject, the text itself feels rather dull as it lacks the spark, commonly associated with Umberto Eco's writing.

There is also a hilarious entry by the American writer, literary critic, and editor Anatole Broyard who is known for his work for many years as an editor and book critic in the New York Times. Broyard, in his brief article on why he abhors lending his books to others, makes several witty remarks such as: "I feel about lending a book the way most fathers feel about their daughters living with a man out of wedlock" or, even more pointedly, "to the doted book lover, the idea of reading a borrowed book is disgusting, an unclean habit akin to voyeurism". A Passion of Books moreover includes miscellaneous lists, mainly indexing classic works, for example, the greatest books of the 20th century or "Books That Changed America". It is certain that the reader will discover titles that he was previously unaware of and I found many books that I haven't even heard about them ever, even though they were catalogued among the best writings of our era. What I found most interesting in this book though, is a small snippet from John Milton's Areopagitica, the English poet's polemic against censorship as presented in his controversial pamphlet, published in 1644. Milton's words, addressed to the English Parliament of the time as a response to an established restrictive printing ordinance, are a celebration to the reading culture and the essential objective that books encompass, while at the same time condemning in the most vigorous of ways any attempt at suppression of the free circulation and distribution of the literary product. Last, but not least, there is Philip Roth's "The Newark Public Library", a pithy essay that will be better understood if the reader is aware of the more general, social and political context of the era when it was written. Roth writes in response to the harsh decision of the local council to cut the funding and shut down the community's library after the eruption of violent rioting in the city in 1969. Through the calm presentation of reasonable arguments, Roth explains the urgent need for the council to withdraw their ruling for a number of reasons pertaining to the greater good of the Newark's residents which is inseparably linked with the maintenance of public cultural institutions.

As an avid reader myself, I was in the most fitting state to appreciate and acknowledge this exquisite collection's merits and my overall assessment for the Passion for Books is more than positive, bordering on enthusiastic. In simple terms, there is a lot to learn in the sixty chapters featured in the book and, apart from the fundamental discovery of new books and authors, there are some fun facts that will literally blow your head off. For example, who knew that the classic novels Dune by Frank Herbert and James M. Cain's acclaimed noir The Postman Always Rings Twice had been rejected for more than twenty times by publishers? This is a just a small taste of the trivia that are interspersed throughout the collection and add a unique flavor to the book. A Passion for Books is, in a way, complementary to the aforementioned Speaking of Books: The Best Things Ever Said About Books and Book Collecting, a tome that consists exclusively of a listing of quotes about books and reading by authors, editors and writing professionals. This collection dosen't have to be read individually as its fragmented structure doesn't demand a great deal of concentration by the reader, allowing the reader to read something else at the same time. To conclude, it's a fun, accessible assemblage of various writings regarding books and the art of writing. Recommended to all.

A Passion for Books: A Book Lover's Treasury of Stories, Essays, Humor, Love and Lists on Collecting, Reading, Borrowing, Lending, Caring for, and Appreciating Book