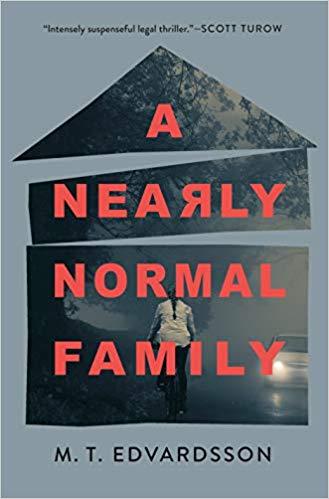 This is one of the most successful products of the Nordic Noir genre for 2019 and a thoroughly entertaining and satisfying read as well. A Nearly Normal Family is a book that cannot be strictly categorized in one single genre as in parts it is a courtroom drama, murder mystery, and family drama.

The story is narrated successively by the three protagonists, Adam (Father), Ulrika (Mother), and Stella (Daughter). We are witnessing their -reliable?- accounts of the same story, though from three different perspectives. The setting is the southern Swedish city of Lund, near the Danish borders, a small town where everyone knows everyone. The family's settled and structured life turns upside down when Stella is arrested as the prime suspect in a homicide case. She is accused that she murdered a young man, Chris, and she seems to lack a strong alibi concerning her whereabouts at the time of the murder. Adam is a pastor, a man devoted to truth and God while Ulrika is a successful criminal lawyer with a bright career so far. Both parents in their attempt to help Stella at any cost will have to face their own past mistakes and admit things that they managed to keep under the rug for all their life. Naturally, the case and the subsequent police investigation will have a devastating effect on the -already strained- family relationships.

The reader becomes gradually acquainted with the main characters as they slowly reveal their secrets and lies, and the maturity of the author is evident in the excellent, characterization in this novel. A Nearly Normal Family features real, three-dimensional protagonists whose inner thought process makes the reader feel familiar as he can easily identify with each one. The pacing of the book is also masterful and the suspense is kept alive throughout the whole novel, even though the storyline is not fresh or original. Fans of Scandinavian Crime Fiction have come across these themes and tropes in a wide number of the genre's novels. The strength of A Nearly Normal Family lies in the quality of its prose and the mature writing style of the author.

On the negative side, I have to say that I found the finale to be a disappointment. Anyone can guess from the early pages of the book what happened at the night of the murder and who the real culprit is. The result is the ending to feel anti-climactic and lackluster. Apart from that, I cannot detect any other -major- flaw in M.T. Edvardsson's novel and I am sure that we will hear more from him in the years to come. He managed to set his own distinctive mark in a, more or less, saturated genre.