A Line to Kill

The author as protagonist. 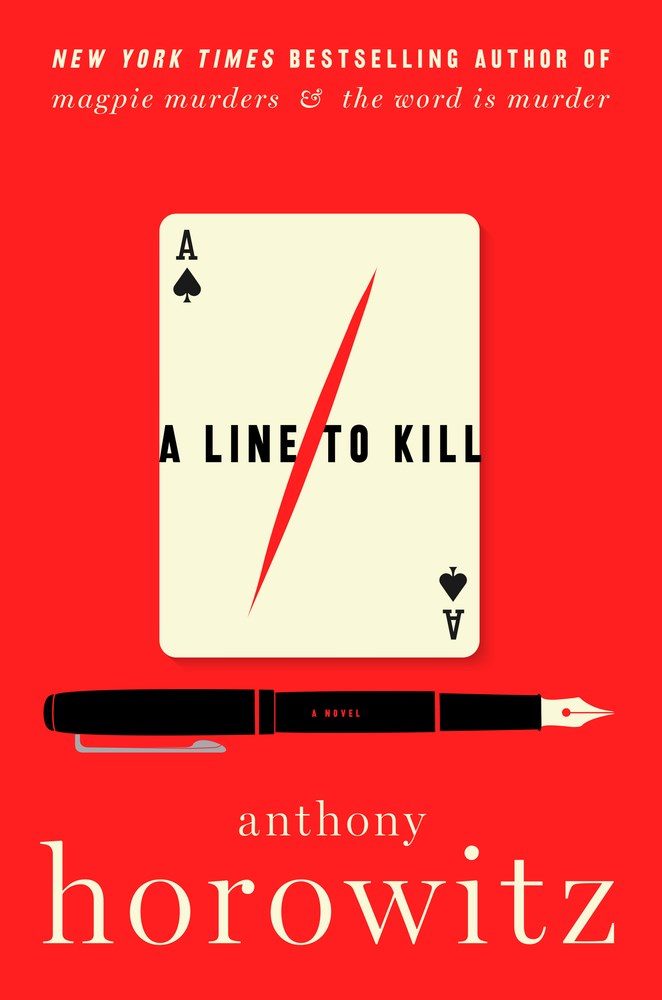 There are few things more brazen than for an author to choose to expose himself as the sole, first-person narrator in his own crime novel and Anthony Horowitz definitely belongs in that bold elite of contemporary fiction writers as he has already proved by penning books from a variety of different genres. His Alex Rider series made him known as one of the most seminal children's authors of the last decades. The English author and screenwriter has also been involved in numerous hugely successful television productions such as Foyle's War, Poirot, and Midsomer Murders exhibiting his singular talent in creating alluring fictitious worlds and imaginative plotlines that demand the audiences' rigorous attention. Horowitz made his breakthrough in crime fiction with the acclaimed Magpie Murders, a novel paying tribute to the respected mystery writers of the English tradition.

A Line to Kill is the third installment in the "Hawthorne and Horowitz Mysteries" following The Word is Murder and The Sentence is Death. The previous two books have been acknowledged as strenuous attempts to reinvigorate a highly glutted genre by introducing an innovative twist in the narrative procedure where the author himself becomes the protagonist. Horowitz writes in first person chronicling stories about murder that he investigates in the company of a peculiar ex-detective and current police consultant Daniel Hawthorne. The two of them form an odd pair that brings to mind the duo of Sherlock Holmes and Dr. Watson, given that Horowitz is essentially the one documenting the action carried out by Hawthorne who employs his impeccable deductive reasoning and unfailing instinct to solve the case at hand.

The story begins with Anthony visiting the premises of his publishing house to have a conversation about the upcoming publication of his book The Word is Murder. There, Anthony narrates a story which is based on true facts as he experienced it and reveals the persona of Daniel Hawthorne as the man who was able to crack the case. As the news of his fruitful collaboration with Hawthorne have reached the ears of his agents, Anthony reluctantly agrees to arrange a meeting in order to introduce his companion to the people who are going to put out his work. During that meeting, Horowitz and Hawthorne learn about the existence of a new literary festival taking place in the tiny island of Alderney in the English Channel, off the French coast of Normandy. The publishers convince them to attend in order to promote their impending book and get acquainted with some of the hottest names in the industry.

As Anthony and Daniel arrive in Alderney, they meet the fellow participants of the festival and they form a first impression of their characters and idiosyncrasies. The group consists of a French poet, a cookbook author, a children's fantasy writer, a mysterious blind woman who claims that she possesses psychic powers, and a middle-aged historian who knows everything concerning the troubled past of Alderney. The island itself is a small, desolate place and the closed community mentality dictates that everyone is aware of everyone else's business. Charles le Mesurier is the local wealthy patrician and a person who inspires rancor and hatred to the majority of the community because of his immense arrogance, crude behavior, and nonchalance to the rules of common courtesy. After a party held in his mansion, Charles is found murdered with a knife sticking from his throat and it's time for Anthony and Daniel to take action. As the local authorities are totally inexperienced when it comes to murder, Hawthorne's investigation is the only hope for the case to be solved.

The relationship between Anthony and Hawthorne is one of the biggest perks in the novel and there are many instances in which their interactions are delightfully hilarious, offering the necessary coming relief to the main storyline. Hawthorne is always keeping things from Anthony who vainly tries to make sense of what is happening based on his experience as a crime writer. Hawthorne is also the one who is leading the interrogations often employing a brash attitude that always gets him the desirable results. The reader is following the story through Anthony's eyes and gets all the necessary information needed from his point of view. The fastidious observations by the author offer a guiding light through which we are able to participate and speculate about where the story is going. The twists and turns of the plot merge harmonically with the subtle narrative voice of Horowitz and we find ourselves guessing about the identity of the culprit until the final pages where Hawthorne's brilliance shines once again and explains everything.

I believe that A Line to Kill is the best novel of the series so far and in this novel Horowitz lets his influences to be revealed more clearly than ever. Agatha Christie, Arthur Conan Doyle, Dorothy Sayers are only some of the great authors that shaped Horowitz's writing style and choice of themes, even though his work retains its originality due to the unique narrative style. It's always refreshing to read something different, a book that deviates from the established norms of the genre and I relished it with great pleasure. Even though this is part of a series, it is not strictly necessary to have read the previous one in order to enjoy it and it could act as the perfect initiation to Horowitz's work. The book will appeal to the fans of the Golden Age of Detective Fiction as well as the fans of Sherlock Holmes' stories.

A Line to Kill