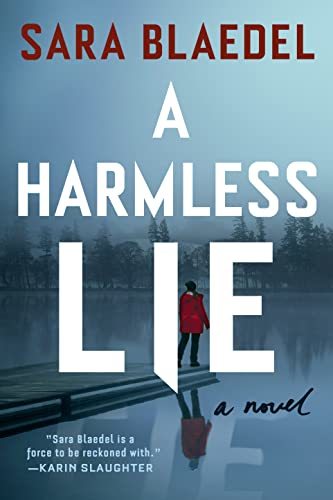 "Fear has a way of growing when you're alone".

This is only the second novel that I've read by the prolific Danish crime writer, Sara Blaedel. The previous one was the introductory installment in the Louise Rick series, The Midnight Witness, which wasn't exactly my cup of tea, thus I later avoided Blaedel's new releases as my opinion about the author was rather unfavorable. It was only recently that I decided to give Blaedel one more chance as I keep reading in author interviews and Q+As around the web that many of them feel, especially those originating from the Nordic countries, that they share a special kinship with the creator of the Louise Rick saga that consists of 12 books so far. One example is the Icelandic Queen of Crime Fiction, Yrsa Sigurðardóttir who, in the relevant question posed by our magazine in a recent Q+A (that you can fully check here), which she was kind enough to answer, stated that she discerns certain similarities with Blaedel in terms of protagonist development and the realism that pervades both the authors' novels. Blaedel's name has become one of the most popular and acclaimed ones in contemporary Scandinavian crime fiction and each new release by her is extensively reviewed and discussed around the web. The Louise Rick series is one of the most well-known Danish novel sequences of classic police procedurals blended with thriller and whodunit elements while retaining the trademark traits of the genre: dual timelines, multiple perspective narrative, strong female leads, and gloomy settings.

Louise Rick is the detective and the one of the two main protagonists, the other being Camilla Lind, a crime reporter in the "Morgenavisen" newspaper and a fierce investigator who always helps Louise getting to the bottom of her inquiries that often involve the most abominable atrocities committed by humans such as murder, abduction and rape. Camilla and Louise are much alike in terms of personality as they both share a simmering passion about their respective jobs, a fact that functions as the story's main plot engine that moves the story forward with the two heroines each contributing their part in the final resolution of the case at hand. They are best friends, even if their interactions are often heated as a result of the immense stress caused to them by the difficulties that each case presents. Both the protagonists steadfastly follow the tradition of the archetypical Nordic female investigator as established by CID Sara Lund in Soren Sveistrup's iconic TV show Forbrydelsen and Stieg Larsson's computer-hacking/avenging angel, Lisbet Salander who became infamous through Noomi Rapace and Rooney Mara's embodiments of the character in the Swedish and the American feature film adaptations of The Girl With the Dragon Tattoo, a milestone novel for the so-called Nordic noir genre.

In A Harmless Lie, Louise faces one of her worst nightmares as her beloved brother, Mikkel, becomes the prime suspect in the case of his wife's, Trine, mysterious disappearance. The authorities treat the case not as a typical missing-person case but as a potential murder as there are many indications that point to a possible crime committed by the husband who is always the first person to take the blame in such cases. The personal cost that Louise has to pay throughout the story is highlighted by the author as she vividly portrays her hunt for exonerating evidence that would set her brother free while at the same time struggling to keep her family united under extreme circumstances. On her part, Camilla is also facing familial trouble as her 17-year-old son, Markus, announces to her one fine morning that he is soon going to become a father. His mother is dead set on making Markus see reason and convince him to proceed to the most sensible solution, an abortion. However, Camilla's family, her parents and ex-husband, do not seem to share her misgivings regarding Markus's predicament, something that severely annoys her. Mikkel's involvement in the case of Trine's vanishing also affects Camilla as her best friend's brother is in the eye of the storm and using her unfailing journalistic instincts, she will conduct her own personal investigation on the case in parallel with Louise's rogue inquiries as she works on this case in a non-professional capacity, despite being the newly appointed chef of the Homicide Division in Copenhagen.

The novel begins with Louise being on vacation in Thailand where she receives a frantic phone call by her parents who inform her that her brother, Mikkel, has attempted to commit suicide, fortunately without success. Mikkel's desperate action seems to be a direct consequence of his wife's, Trine, abandonment of him and their two little sons for a second time in a short time span. Louise returns immediately in Denmark where the public opinion reels from the grisly discovery of a dead body in Echo Valley. The deceased is soon identified as Susan Dahlgaard, a teenage girl who has been missing without a trace since 1995 when she disappeared during a class trip in Bornholm. Susan is found in a state of advanced decomposition lying in a narrow cave that was hidden all those years by a fallen tree. Her presence in the forest is one of the many enigmas that the police have to figure out in order to find out the truth about Susan's death. Murder or random accident? Trine, the disappeared wife of Mikkel, had also been in the Bornholm excursion as she was then a member of a closed knit "girls' gang" consisted of her and her classmates Susan, Pia, and Nina. When Louise learns that Pia committed suicide some days earlier, she begins to suspect that there is a hidden link that connects the 1995 case with Trine's fate. With the investigation's workload divided equally between Louise and Camilla, the two friends will delve into an investigation that blurs the boundaries between past and present and is hindered by the systematic lying and relentless secret-keeping by those involved in the case.

The story drags on for the first half of the novel, though the tempo accelerates in the second part culminating in the ending chapters featuring the resolution of the story and the revelation of the culprit. Blaedel writes in a simple, plain style that comes across as almost effortless, it's like the words flow naturally from her mind to the page without passing through a filter with the author consistently avoiding any attempt to impress the reader with the use of cheap ploys or tedious cliches as so many of her peers tend to do. The Louise Rick and Camilla Lind novels are half classical police procedurals and half focusing on the journalistic investigation conducted by Camilla. Thus, the author evades the cardinal sin of the police procedural sub-genre, that is the boredom closely associated with these novels featuring a story which is exclusively told through the bureaucratic viewpoint of the official authorities' inquiry. The plot takes revitalizing breaths each time the POV alternates between Louise and Camilla, each making their own breakthroughs and gathering the pieces of the puzzle that form a complete, credible picture only by the end of the story. I have to admit that A Harmless Lie made me reconsider my judgement concerning Sara Blaedel's talent as a crime writer and I will seek to read more of her titles in the future. Fans of Nordic crime fiction should definitely give this one a go.